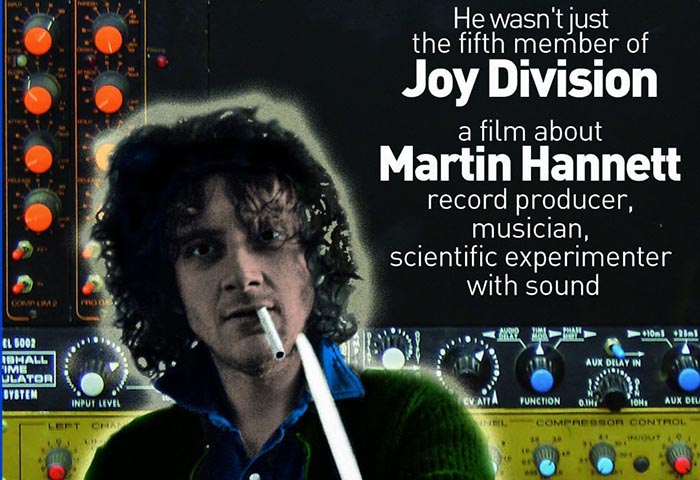 Martin Hannett’s life is explored in a new music documentary

A rare glimpse into the life and work of one of the UK’s most influential music producers, Getintothis‘ Michael Booth checks out the new music documentary on Martin Hannett.

There’s nothing we love more here at Getintothis than a riveting music documentary to flesh out our appreciation of an artist or album. Indeed when done right it can prove almost as satisfying as the music itself, reliving the drama of the creative process and the battles won and lost to bring us our drug of choice.

In recent years music producers have been the subject of some great documentaries. Joe Meek and Phil Spector both spring to mind, their dark mercurial characters providing the obligatory twisted tales and perfect subject matter for analysis.

Last month saw the release of He wasn’t just the 5th member of Joy Division – A film about Martin Hannett, another true musical maverick whose pioneering spirit made an indelible stamp on the early Factory Records sound.  Today, the director of the documentary, Chris Hewitt, visited Leaf in Liverpool for a screening and to take part in a Q&A session. Chris also treated us to an exhibition of Martin’s original equipment which he’s now found himself in possession of. Quietly sitting on a table lay the age faded tape recorder on which Hannett made his first sound experiments as a child. Adjacent were his beloved electro-static speakers, favourite records and early synths including a mini-Moog. Centrepiece to it all was a brooding picture of Hannett at the console which lent the occasion an eerie sense of his presence.

Many will already be familiar with the portrayals of Hannett in films such as Anton Corbjin’s Control and Michael Winterbottom’s Twenty Four Hour Party People, the latter serving up a particularly caricatured slant. Certainly he was a man who wore his eccentricities on his sleeve and secured a reputation for being uncommunicative with the artists he was producing, regarding them as almost superfluous to the process. Most importantly, he would stop at nothing to achieve a particular sound he could hear in his head, even when it involved modifying instruments and then ordering artists to play them down a lift shaft.

With a running time weighing in at nearly 4 hours it would have been impractical to devour this behemoth in one sitting but we started by taking in the first hour, which consisted primarily of interviews with personal acquaintances, ex-girlfriends and people involved in the Factory music scene. From the outset I’d say that this documentary is likely to overwhelm the casual music fan with its raw, unpolished nature. The editing is at times distinctly haphazard and frequently the image quality is poor, added to there’s an abundance of tech talk and a tendency by some to meander. It goes without saying however that we at Getintothis are anything but casual and to the devoted this rough diamond is a mine of information for Hannett and Factory music fans alike.

It is certainly apparent this project has been a labour of love for Chris Hewitt and one senses a feeling of obligation on his part to get Hannett’s story out there and documented for posterity. Many of the interviews were carried out by Jon Ronson and Tosh Ryan during the 90s apparently for a project which never came to fruition. Many years later Chris Hewitt salvaged the material, conducted some of his own interviews and then amalgamated everything for this documentary.

All of the faces you’d expect to see are featured throughout.  Tony Wilson, Bernard Sumner and Peter Hook all provide insightful commentary. Wilson is typically grandiose about the fellow Factory founder, declaring him to be one of the greatest producers in music history. Sumner and Hook both fondly reminisce about their efforts to wind Hannett up and recall his displeasure at their attempts to be involved in the production process. “Get those two fucking idiots out of here” was roughly his response. Others remembered Hannett commenting that he loved working with Joy Division because “they didn’t have a fucking clue” and this is borne out by the ear-witness accounts of those who attended their early gigs. The less a band knew, the less they could question his authority.

It has always been a deliciously seductive idea, that of the aloof auteur, taking the unrestrained raw feed of the impassioned artist and fashioning something timeless and unique from it. As Hook observed, had Joy Division produced themselves their sound would’ve been indistinguishable from everything else around at the time. Instead Unknown Pleasures and Closer have a poise which elevates them into the pantheon of greatness.

Other Factory stable mates such as Vini Reilly of Durutti Column recall their memories of working with Hannett, Vini commenting that Hannett’s tinkering would frequently render his fret work unrecognisable. We were surprised to learn that the original incarnation of Durutti comprised numerous musicians who went on to form the basis of Simply Red!

At times Hannett favoured the unorthodox technique of recording every single facet of an instrument separately, so instead of recording an entire drum kit, each individual drum would be recorded separately and then treated with numerous effects. It is easy to see why traditional bands who enjoyed a studio jam would find his process completely monotonous, tapping away a metronomic beat on a single snare drum for 5 minutes.

It was also fascinating to hear embryonic Stone Roses members Reni, Peter Garner and Andy Couzens talk about recording the aborted debut album which was eventually released as Garage Flowers. Hannett certainly didn’t regard the production process as a democracy, nor did he take criticism well and felt the musicians should leave well alone, hence the album ended up sounding very different to the way they desired. Ultimately this would lead to its re-recording by a new line up which we’re sure all music fans would agree, proved to be a good thing when it finally arrived in 1989.

Clearly Hannett was not a producer under whom every band would thrive. Those seeking a collaborative relationship would be ill-suited to his way of working. Bono comments in a brief interview that after making the single 11 O’ Clock Tick Tock with Hannett, U2 decided not to use him for the forthcoming album as they felt it would ultimately be a Hannett record and despite having great respect for his work it was not what they wanted. This reverence still resonates today when they dedicate its live performance to him.

One thing this documentary does lack is a clear narrative thread. Hewitt’s approach appears to have been to catalogue as much as possible rather than cultivate specific threads in a focused way. It seems very little has been left out, but very little has been shaped or moulded either. While we get a genuine sense of the post-punk` Manchester scene and Hannett’s influence at Factory, we never truly get under the man’s skin. Specifically, his demons remain unexplored and there is no concerted attempt to explain how such a scientific, exacting character ended his days as a bloated heroin addict. Perhaps this would have been a futile exercise given Hannett’s guarded nature and abstract personality. Many commented that he created and lived in his own world and they felt they never really knew him, despite spending considerable time in his company.

After watching the first part of the documentary Chris Hewitt began taking questions from the audience. Frequently called upon as a talking head in music documentaries he certainly has an enviable wealth of knowledge concerning the Manchester post-punk scene and was happy to regale affectionate tales from the era.
He was able to elaborate on the musical influences of Hannett, many of which were rather surprising. The escapism of American West Coast rock was an inspiration to Hannett and he spent a considerable amount of time working out how band’s such as Steely Dan created their more exotic textures. He was also a fan of film soundtracks and enjoyed listening to Jerry Goldsmith’s Star Trek score. The greatest influence came from the dub records he listened to during late night dope smoking sessions at a friend’s house.  The echo laden effects became central to the sound he strove to create, imbuing everything with a sense of acoustic space and delay. He even liaised with hardware manufacturers in the hope of creating an effects box which would provide the perfect type of echo. Any attempt to define the Martin Hannett sound would have to start with a discussion about echo effects.

After the Q&A session we picked up the documentary in the last hour, which contained commentary on Hannett’s regrettable fall out with Factory and his subsequent return to produce the Happy Mondays which was a huge success. Hannett’s relationship with Tony Wilson appeared to sour over the whole issue of the Hacienda, with Hannett adamant that they should concentrate on building a studio instead of a night club. The huge losses sustained by the Hacienda ultimately vindicated Hannett’s position but it’s hard to imagine the Manchester scene without it. Part of the fun of Factory was the insanity that lay at the heart.

In summary we found Chris Hewitt’s documentary a very worthwhile watch. Given that there’s so little in video format out there concerning Hannett and we’re unlikely to see anything else any time soon, this is to our mind an important record for the annals. It certainly isn’t perfect and the poor sound / image quality will test some viewers on occasion but this remains an indispensable starting point for anyone keen to learn more about one of the most distinctive and influential music producers the UK has ever seen.

Chris Hewitt has also published a book to accompany this documentary which goes into even more depth about Hannett’s life and on the strength of this we would certainly recommend checking it out.