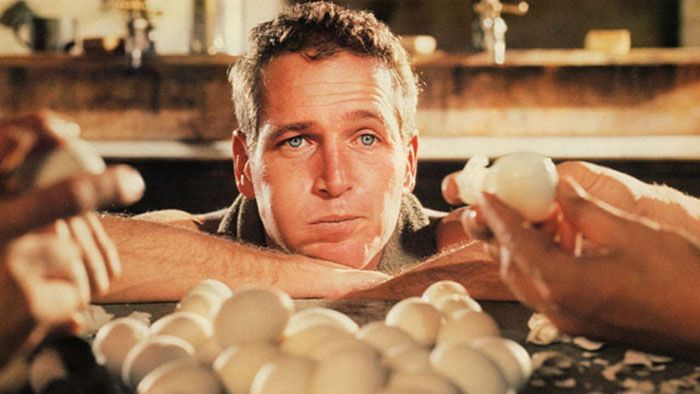 Cool Hand Luke will be screened at FACT next month

Ahead of FACT’s screenings of Cool Hand Luke and Dirty Harry next month, Getintothis’ Adam Scovell delves into the man behind their classic film scores, Lalo Schifrin.

The 1960s were a turbulent time for film scores. With the increasing dominance of popular music’s presence, as well as the creation of new electronic instruments, the film score underwent such a huge number of changes that the era is the one of the most interesting to study.

With its increase in respect for non-classical musical forms such as folk, jazz, blues, and pop, film music had to adapt to keep up with a burgeoning and rebellious generation’s creative needs and desires. Many film composers began to adapt to these new sound worlds but none did so with such effortless cool as the Argentinean born arranger, Lalo Schifrin.

Though his name may not be instantly recognisable, his music more than makes up for his relative obscurity. Schifrin’s most famous composition has been so overplayed, recontextualised and frankly abused, that it’s difficult to appreciate its complexities without thinking of its huge usage in various programs and awful One Show style magazine shows. The piece is the theme tune from Mission Impossible and it opens up a realm of possibilities for film scores. It uses strange time signatures (occasionally slipping into 5/4), and makes use of several era-defining instruments including lead flute melody lines (that would soon become the norm for 1970s cop dramas) and strong, jazzy brass.

As a theme, it surmises Schifrin’s work perfectly; a strong sense of confident machismo with instrumentation that sounds quintessentially sixties. Because of this sense of effortless cool, the composer’s music would find its way into a large number of films with “cool” leading men, often solitary in their nature with a natural affinity to celluloid violence and fast cars. The earliest dummy-run in this style can be heard in Walter Grauman’s average film, I Deal In Danger (1966). The score here does the majority of the work in dealing with the film’s pulpy feel but it’s not until the following year that Schifrin as a composer would really find his feet.

Though he is credited with a range of film and television work, starting with Carlos Stevani’s Venga a bailar el rock in 1957, it’s not until his score for Stuart Rosenberg’s Cool Hand Luke – a full decade later – that he really comes into his own as a composer. Luke’s score is at once vast, incorporating so many different styles, genres, and instruments that it’s hard to believe it’s all from the same creative mind. Rosenberg’s film follows Paul Newman in one of his first truly iconic roles. He is the iconoclastic nonconformist in a rural chain gang; a rebel most definitely with a cause for the late 1960s, full of frustration and quiet angst.

His gradual rebellion against authority was the perfect jump start for a decade about to test the rigidity of the establishment through three years of social upheaval and this is perfectly sound-tracked by Schifrin’s music. His precocious talent is instantly recognisable from the film’s opening; a choppy, haphazard jazz ensemble seeming to react to Luke as he vandalises several parking meters out of a frustration born from disenfranchisement with society. The authority figures that he gradually comes up against are not only defined by their blank faces and reflective sunglasses but by their musical accompaniment too which is very deliberately based around southern banjo and country music; this is a musical rebellion against cultural traditions as well as lawful ones.

The violence of the chain gang’s chores are also given musical precedence with the inmates’ cutting of reeds on the highway given the same aural equivalent as the film’s more violent sequences. As they sway towards exhaustion because of the stifling heat of the highway, the music enhances their trauma but also provides a context for the inmates’ resilience, especially Luke’s.

He becomes their moral leader, driving them forward to show that a quiet rebellion can still be one that is enough to lead to a mental and, eventually, a physical escape. With Schifrin sound-tracking the film, Luke’s battle with authority is given the quality of inter-generational warfare; the old ways gradually diminishing as the brass and woodwind of the weird San Fran age begins to take hold and shake apart the traditional conservatism.

From here, Schifrin would define the sounds of the 1960’s masculine male with scores for mainly crime and war dramas such as Don Siegel’s Coogan’s Bluff (1968) with Clint Eastwood, Peter Yates’ Bullitt (1968) with Steve McQueen, and John Boorman’s Hell In The Pacific (1968) with Lee Marvin and Toshiro Mifune. These are films bursting with testosterone, fuelled by evolving masculine identities that are often scuppered in development by crime, war, and isolation.

His work on Coogan’s Bluff would form a relationship with Don Siegel that would last through several films, with Schifrin helping define Siegel’s most famous of inner city cowboys: “Dirty” Harry Callahan, played with grimacing toughness by Clint Eastwood. In the first outing for the morally ambiguous cop, Dirty Harry (1971), Schifrin’s music would venture into thematic and avant-garde territory as it related the narrative of a liberally veneered psychopath terrorizing the still-swinging San Francisco.

As the opening, almost Ligeti-esque, music accompanies Scorpio‘s (Andrew Robinson) first killing, it begins to morph from vague atonal sounds into one of the most hip-hop sounding of drum beats imaginable. Considering this was in 1971, the music must have sounded like it was from a different planet. Schifrin also tows Siegel’s right-leaning line, siding with the director’s stance that the liberal free-loving movement created the monsters, both in this film (Scorpio and the other inner city weirdoes Harry meets) and in reality (Charles Manson and his “family”). For Scorpio‘s main theme, Schifrin incorporates some of heavy “acid” bass lines as the psycho prepares to kill, the bass distortion being easily associated with any number of bands from the era’s movement; the blame here being squarely aimed at a supposed liberal softness.

Schifrin may best be remembered for his hummable theme of espionage for Mission Impossible but his counter-culture work redefined the film score in the, by then dilapidated, Hollywood system. He may not have been part of what is now termed the American New Wave (Peter Bogdanovich, Five Easy Pieces etc.) but, musically, he was far, far ahead of his time; using a complete absence of bias against other musical forms to create scores that sounded fresh, innovative, and quintessentially cool.

Lalo Schifrin’s scores can be heard in Cool Hand Luke and Dirty Harry which are screened at FACT on September 14 and September 28, respectively.