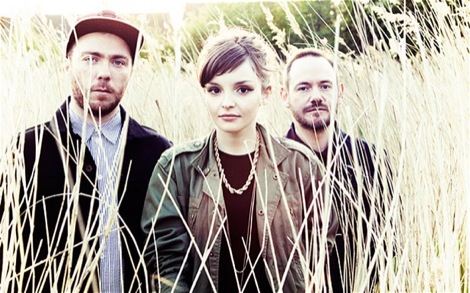 Fresh from playing the John Peel Stage at Glastonbury, Glaswegian band Chvrches will headline the 10th edition of Liverpool Music Week with the Closing Party taking place in the city’s blossoming Baltic Triangle.

Chvrches, who’s top 10 debut record The Bones of What you Believe shot them to stardom in 2013, will be making their Liverpool debut alongside Atlanta rock & rollers The Black Lips and Radio One sensation Nick Mulvey.

Music Week, which has consistency supported exciting new Merseyside talent, also includes a raft of Liverpool acts on the closing party bill including 16-year old Låpsley, winner of the GIT Award’s One To Watch prize, new Domino Records signing We Are Catchers plus goth-rock outfit Bird.

Confirmed venues for this year’s Closing Party are Camp and Furnace, The Blade Factory, Constellations, District and The Nordic Church, with many more venues and spaces in the area to announced.

This year’s Closing Party, which starts at 2pm and runs into the night, follows on from the huge success of the last edition in 2011 held in the six-storey warehouse venue CUC across 11 stages that saw a sold-out 1,800 crowd attend the all-nighter.

We will be taking over Liverpool’s most exciting new quarter for one day only, celebrating and embracing the city’s new cultural community with a marathon of exciting gigs and commissions in the area’s new venues and unknown spaces. If you’ve been at any of our previous Closing Parties, then you’ll know to expect a serious mind-bending musical extravaganza.

Liverpool Music Week, the UK’s largest indoor winter music festival will be staging over 50 events, across key city venues and will play host to over 250 live acts including Mogwai, Caribou, The War On Drugs and Wild Beasts.

Attracting a record breaking 48,000 people for its last edition, this year the festival returns with a jam-packed itinerary of live music, to take over the city for 10 days creating one of the biggest musical events the city has ever seen.

Liverpool Music Week 2014 will begin on the Thursday, 23 October leading up to the festival’s Closing Party on November 1.

Chvrches have announced the release of their new single Get Away on 8 December – the first new song since 2013’s gold-selling debut album The Bones Of What You Believe.

Full details on the official site. 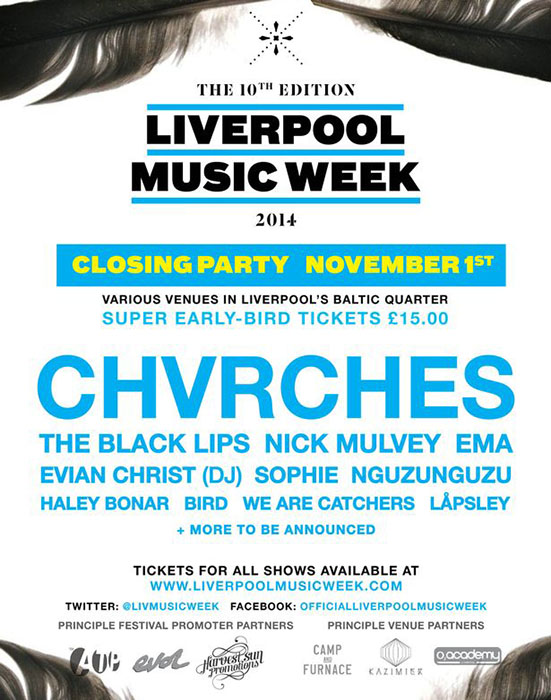 LMW in association with EVOL – October 30 at Camp & Furnace

LMW in association with Harvest Sun – November 4 at O2 Academy

The War On Drugs and special guests.