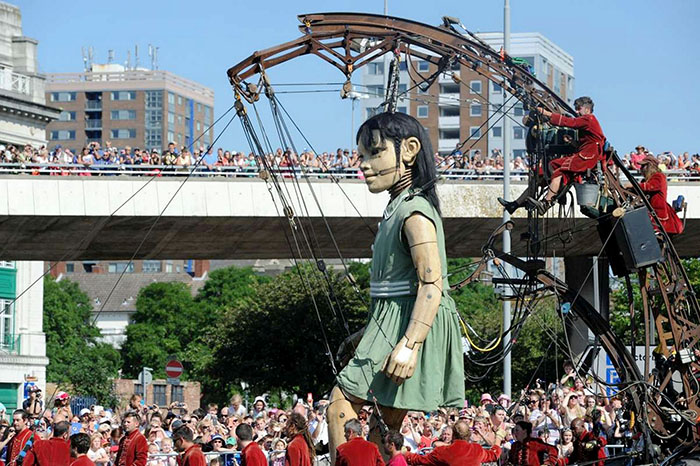 Little Girl Giant from The Giant Spectacular – Memories of August 1914

The Giant Spectacular which arrived in Liverpool to commemorate the centenary of World War I was a communal experience the city has rarely experienced before.

For five days the Royal de Luxe team and their colossal Giants provided a visual and sensory feast which was witnessed by more than a million people.

Here at Getintothis HQ we asked one of our favourite artists, Afternaut (aka Adam Rowley), to team up with Merseyside based videographer Joe Campbell and his team to produce a highlights package married to a brand new three minute soundtrack. Here’s the result.

Reflecting on the project Joe Campbell told Getintothis: The project grew from a phone conversation with Getintothis editor Peter Guy. It was exciting as it felt like there was little pressure and the lack of distinct plan leant a voyeuristic feel – especially in one of my favourite sections in the video where the little girl moves in-between both the trees and the people in St Johns Gardens.

Making this short film was a truly eye opening experience, before this project I admittedly didn’t understand the attraction to the Giants but after seeing the Grandmother asleep outside St. George’s Hall I instantly ‘got it’.

The greatest challenge in making this film work wasn’t for myself but for Afternaut – the composer of the music that compliments the film. It was a first and a genuine privilege to work with a piece of music that was for the sole purpose of a film I was creating.

I think Afternaut had an extremely hard job to create such a beautiful piece of music that matches something that is so iconic to happen in our city while having to avoid being compared to Royal De Luxe‘s live band soundtrack which followed the Giants around for the three days.

Afternaut, added: I was thrilled when Peter asked me to be involved.  I saw the Giants when they visited Liverpool back in 2012 and was absolutely amazed by them.  I’ve spent the past year making music that has been synthetic and chaotic so working on this has allowed me to play with sounds at the other end of the spectrum, producing something more organic and uplifting.

I wanted it to be a happy piece of music after seeing the joy that was brought to the city by Jean Luc and his team. I also wanted it to feel nostalgic and evoke memories of when Royal De Luxe last visited and to remember those who lost their lives in the First World War.

Despite the short time scale I’m happy with how the music has turned out.  I hope I’ve done justice to the magical atmosphere that filled the city when the Giants were here.”