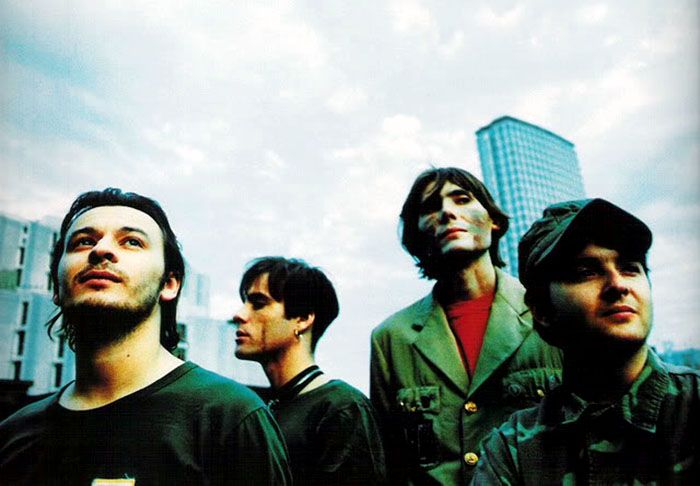 Two decades on from an album that proved to be both a defining statement and a catalyst for a change, Getintothis’ Joseph Viney says his prayers and delves into The Holy Bible.

The Holy Bible is described as visceral, stark and fearful. Any album whose opening line runs “For sale: dumb cunt’s same dumb questions” is bound to come out with its bare fists raised.

Aware and tired of the excesses of their initial brace of albums, Generation Terrorists and Gold Against The Soul, the Welsh quartet sought to forecfully imprint their message upon the public consciousness. They could never have guessed how far it would take them.

Released August 29 1994, the Manic Street Preachers’ third record has endured to become an essential cog in British rock music’s canon. History hangs heavy over and supports it in equal measure. As Richey Edwards’ last recording before his disappearance in 1995, many have interpreted the album as his sign-off. Broken down by depression, anorexia, alcoholism and self-harm, Edwards semi-autobiographically charted his own downfall through horror imagery and allusions to the disastrous state of the world.

Parallels could be drawn with Nirvana’s In Utero, released just under 12 months prior (also their third LP). Brash, abrasive and seething, Nirvana’s final album is seen in some quarters as Cobain’s musical suicide note.

But while The Holy Bible provided a support strut for the structure of Richey’s problems, what the Manics put before the public was something more refined; “academic” as James Dean Bradfield once put it.

Recording itself was alleged to have been fraught beyond belief. Reports at the time and since have Richey trailing into the studio as and when he desired, trailed by empty cans and bottles, crying freely and generally descending into the void. It is no surprise then that the album imposes feelings of desolation, bleakness and isolation upon the listener.

But with no shortage of thanks to the excellence of Messrs Bradfield, Wire and Moore, The Holy Bible is replete with the hallmarks of excellence. Cyber-punk guitars, mazy passages underpinned by a violent rock sound and a clinical excellence that many artists fail to emulate even today; The Holy Bible is as sinister, perverted and unfair as the world Edwards’ lyrics purported to portray.

Make no mistake about it, the Manics took a number of risks here.

Ifwhiteamericatoldthetruthforonedayitsworldwouldfallapart and its choral refrain of “There ain’t no black in the Union Jack/There ain’t enough white in the Stars & Stripes” was backed by Wire’s ever-so-subtle “…and they say” backing vocals. If the wrong type of person happened to be listening, then the Manics may well have been construed by the public-at-large as a pack of white power bullshit racists. Indeed, even as a relatively young band the Manics made no pretense of being solely for the initiated, despite their legions of smudged mascara and tight trouser wearing fans.

The album’s positioning as a real-time state-of-the-nation lesson is punctuated by the frequent use of dialogue samples at the beginning of over half of the tracks. John Hurt’s utterance: “I hate purity. Hate goodness. I don’t want virtue to exist anywhere. I want everyone corrupt” from a film adaptation of Orwell’s 1984 perfectly embodies the sense of nihilism that the album intends to portray.

The dialogue samples go a long way to enhancing the record’s mood. The infuriating ‘us vs them’, rich vs. poor, ‘fuck you I got mine’ positioning of Ifwhiteamerica…’s intro detailing a gala dinner in celebration of Ronald Reagan ($1,000 dollars a plate? Get out of it…that’s a big old plate) slides into the deeper, more personal and stark warning that begins 4st 7lb (“I eat too much to die and not enough to stay alive/I’m sitting in the middle, waiting.”).

From the haunting Archives Of Pain, the oddly-sexualised Revol and the literary-referencing, jagged behemoth Faster, The Holy Bible has it all. Faster even strikes as a playful number; the chorus of “I am stronger than MENSA/Miller and Mailer/I spat out Plath and Pinter” is a literary snob’s wet dream and a warning of eternal optimism despite all else being wallowed in the muck and the mire.

We alluded to the notion of legacy at the beginning of this essay, and whatever The Holy Bible was supposed to be, did become and has since turned into has shaped the Manics ever since.

2011’s Journal For Plague Lovers was dubbed The Holy Bible II by some and with good reason; the album contained the last known relics of Richey’s lyrics. The Manics, aware of them, finally unleashed them on the public. It was something akin to their own version of Pandora’s Box: allowing the final remnants of their ghosts to escape as not just a group but childhood friends was a huge symbolic act. While Richey was officially presumed dead by virtue of his long, undisturbed absence, Journal For Plague Lovers appeared as if some cathartic howl finally unleashed by a trio of friends finally aware that they could at last move on. Although closure was not officially forthcoming, they may have finally laid some old ghosts to rest.

But one of the reasons the Manics remain so popular and vital is their steadfast refusal to rest on their laurels. Where any number of other groups burn themselves out trying to emulate their younger selves, or tarnish a legacy with any number of silly mistakes, the Manics wear their maturity and long career with pride and use it as a carrot to push their boundaries. Futurology, their latest album, wraps up the ideals of what has come before it, mixed it with their present experience and forged ahead with songs that demonstrate a group with a lot more life in them yet.

The album’s eponymous opening track acts as a mission statement (“We’ll come back one day/We never really went away/One day we will return/No matter how much it hurts.”), before melting slowly and sweetly into songs like Walk Me To The Bridge and Let’s Go To War; combining 80’s New Wave styling with an off-kilter stream of energy that has always been with them.

It’s these anchors to the past that provide the album’s best moments. The seeming obsession with Old Europe and nation state power structures remains and fully evident in the sprightly The Next Jet To Leave To Leave Moscow. Similarly, Europa Geht Durch Mich carries these themes over thudding bass, alarms and a drum beat like a jackbooted army heading to war.

The Manics’ old glam rock leanings reappear too. Sex, Love, Power and Money rides on the crest of a riff that wouldn’t be out of place on Generation Terrorists. Dreaming A City (Hugheskova) and Mayakovsky are high-octane sci-fi instrumentals that call to mind the sight of Prince Vultan and his winged soldiers flying into Ming’s fortress.

History is a fable written by the victors. It’s been a long war but the Manic Street Preachers have always been in control of their own destiny; appearances to the contrary or otherwise. The Holy Bible? Amen.