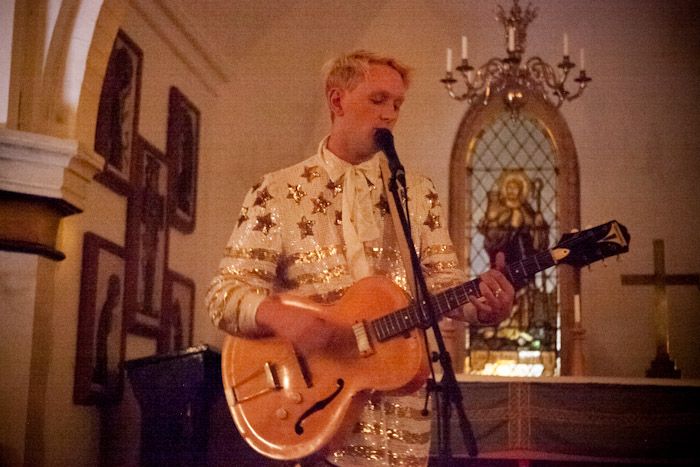 A master of his craft enters the confines of one of Liverpool’s best kept secrets, Getintothis‘ Joseph Viney on an artist at the very peak of his powers.

Getintothis spent a portion of the time before tonight’s gig wondering whether to seek out Mr Wolf and ask him the time.

Yes it’s incredibly groan-worthy and similar to Father Ted screaming “I DON’T BELIEVE IT!” at Richard Wilson, but given that our focus for the evening appeared 40 minutes later than scheduled it might have done some good.

Of course nothing’s perfect and these things happen (speaking as a veteran of Guns N’ Roses gigs anyway). The Scandinavian Church turned out to be a fitting venue, as it happens; Christians have been waiting 2,000 years for someone to show up…what’s another few minutes for Patrick Wolf?

Given how packed the venue is, proceedings looked set to resemble an old school hollering Baptist service. Crowded pews were flanked by latecomers forced to stand in the aisles and in any space afforded to them.

Stepping out in a silver jacket embossed with gold stars and stripes, Wolf has never been shy when it comes to self-expression. His one man show tonight was an intimate and revealing set that displayed his startling musical talents. 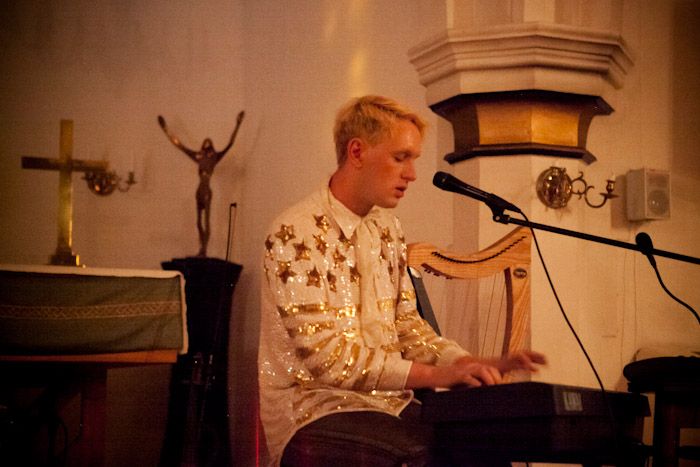 His voice and lyrics combine the slow, deep croon of Edwyn Collins with the bare honesty of Leonard Cohen. Within the first five songs of the night he switches between organ, piano, guitar, harp and violin, and is more than a dab hand at each of them.

A great number of his songs conjure up pastoral images; slow rivers winding through misty meadows, church bells pealing across silent, flat fields for miles around. Godrevy Point, Devil Behind Of Me and The Magic Position are perfect examples of this. He even finds time to squeeze in a new song. Albeit one that takes a few false starts to get through, but any mistakes are laughed off by both Wolf and his audience.

We are also made privy to a few pre-song confessionals. He touches on topics including his own wilderness years, depression and the loss of a close friend. One song even sees Wolf reading out “good luck for tonight” messages from his parents. At times you feel as though you’ve intruded into his home and are just eavesdropping on a slow day.

Even by Wolf’s standards it might be seen as a little daring to put yourself out there in such a manner. After all, wearing your heart on your sleeve comes with a multitude of risks. But at the same time the confessional artists tend to be the ones who inspire the most devotion both in themselves and their fans.

The hushed audience, radiating adoring gazes and gratitude for Wolf’s performance tonight, are a testament to that.