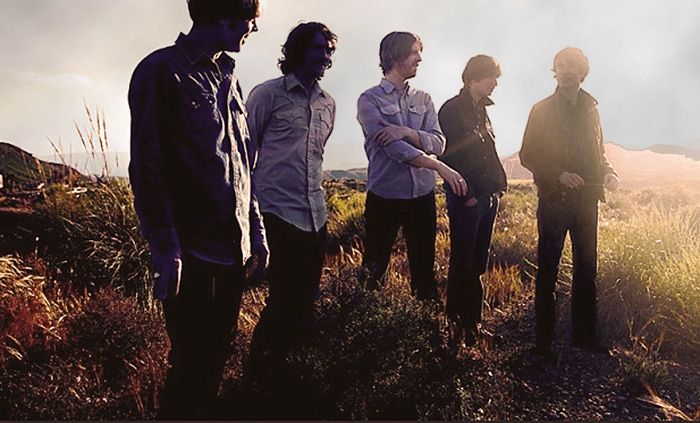 The Coral will release The Curse of Love on October 20

The Coral’s long-awaited return is finally here… kind of. Getintothis’ Patrick Clarke catches up with the band’s Nick Power and Ian Skelly for a chat about all things Curse of Love.

It’s been a long four years since we last heard new music from The Coral, and though upcoming LP The Curse of Love was recorded eight years ago, their still sizable fanbase is already rejoicing at the prospect of an end to their agonizing hiatus. When Getintothis speaks to the group’s Nick Power and Ian Skelly, however, the pair are still hesitant to announce a full-fledged return.

“I hope it segues into something else,” says Nick of the release, “I think it’s going into a more artistic thing. We’re talking about it but there’s nothing set in stone.” Ian, meanwhile, is far more guarded, “maybe” his only comment as to the prospect of reconvening for a proper studio album or live outing.

For now though we can content ourselves with The Curse of Love, out October 20, which was recorded on an eight-track cassette recorder “six months to a year” after The Invisible Invasion, the band’s fourth album. Two cuts from the album, the title track and Wrapped in Blue have already surfaced, and take a murky, psychedelic tone that’s heavy on a pensive aesthetic. “We were into like Japanese movie soundtracks like The Last Sword is Drawn“ remembers Nick, “we used this violin bow on the guitar… it’s a really evocative sound.” 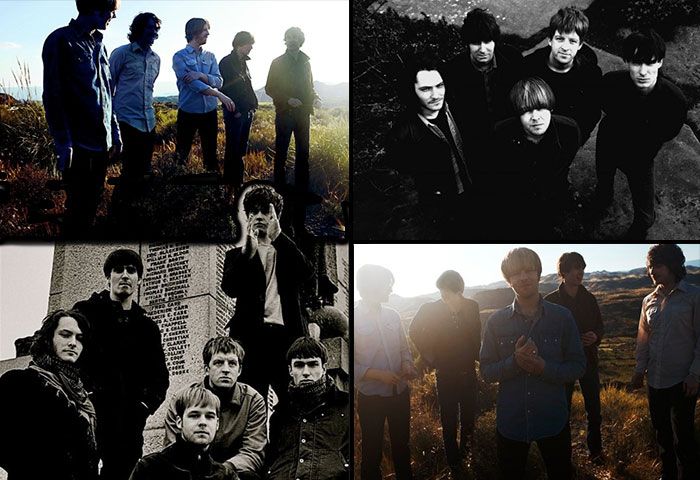 The songs saw the group drift away from the poppier leanings that had originally seen them explode in popularity, and it was their major label status at the time that hindered an immediate release. “I don’t think we would’ve been able to release it on Sony,” says Nick. “There was a side of us that just wanted to do The Curse Of Love, but we didn’t have any sort of way we could put just an artistic thing out that wouldn’t work on a major label. We might’ve said we’ll put this out on a subsidiary label or something but that wasn’t really an option.”

“We were between worlds sort of as far as the way bands are now; sort of in-between that world where bands still got money and were backed by major labels so certain things were expected of you. I guess you did feel pressure to get on the radio,” explains Ian, and owing to a lack of radio-friendly tunes the Curse of Love sessions remained on the eight-track. “They were only ever meant to be demos you see, then we were gonna go on and record them all in the studio,” Ian continues. “I sent them to Geoff Barrow from Portishead [producer on The Invisible Invasion]not long after we recorded them and he loved them and he was always like, ‘Oh just release them like that’.”

In the end it seems Barrow won out, and plans to flesh the tracks out in the studio were eventually turned down in favour of the original eight-track recordings. “It’s all just what was there, what was lying around. There were talks [about a studio recording]around when James [Skelly, Coral frontman]  was doing his solo album of getting the masters out and maybe doing it with an orchestra or getting violins on it and making it bigger. But it was just of that time and it is what it is,” Ian explains. “It’s all on cassette tapes so it’s just got that strange, toy sound on it. A lot of the takes are live as well, bar the vocals, and then the vocals are all one take because we didn’t want to wear the tape down.”

“It was a weird time,” Nick recalls,  “Bill [Ryder-Jones, former guitarist] was kinda leaving and coming back, and we had Dave McDonnell from The Sand Band playing guitar on a lot of stuff, so there was all this traffic coming in and out of the rehearsal room… Lee [Southall], our other guitarist did a few with us as well, they’re all kind of working out parts with each other, it’s all kind of meshing, so you can’t really tell which is which.”

Ian has similar recollections: “We started recording with  Macca and Lee on lead guitar. I guess we just thought ‘let’s just make this record’, then Bill came back halfway through. There was a bit of a divide in opinion about what the band should be doing in terms of people and record labels so it just sort of fell apart, which I was gutted about cause I’d put quite a lot of work into that record”.

“In a way I think it was sort of ahead of its time,” says Ian, and it’s chiefly with the 2013 birth of the band’s own Skeleton Key Records that the group feel that the world’s finally  ready for The Curse of Love. “Now we’ve got our own label it’s a really good environment to release an album like that in,” Nick tells us. “I think a lot more people would ‘get it’ now if you know what I mean.” “I think we were just listening to the old tapes back and I think more than anything that now we’ve got this label set up it just seemed like a good idea to release it on it,” Ian adds.

“There seem to be so many more fans of psychedelia now, of underground music, whereas at the time you’d think ‘where’s your avenues to release an album like that?’” says Nick on the state of modern music, and the band seem to feel that the album’s considerable eccentricities can finally find their crowd. “I think [psychedelia]has always had the audience but they didn’t really know each other. Now everyone’s sort of connected in that way, there’s more of a community,” Nick continues.

This is not, then, a return to the shimmering pop of the band’s early days, nor is it quite the slicker sound of their latter efforts – it’s very much a transitional album, and sees the group at their most overtly psychedelic. “It is accessible, but only if you’re in to a certain side of us,” says Nick of the record, “it doesn’t have any radio-friendly songs. It’s something original that we wouldn’t have known how to release at the time. I’m glad it’s coming out.”

Overall The Coral aren’t quite back just yet, but though The Curse of Love isn’t quite the full-fledged comeback we’ve all been hoping for, its a welcome step in that direction, and the album is set to be intriguing at the absolute least – the sound of a band who’ve proven their brilliance stripped back to their most organic. Whether it’s the start of something enduring or merely a one-off treat, October can’t come soon enough.

Share. Twitter Facebook Google+ Pinterest LinkedIn Tumblr Email
Previous ArticleWho you callin’ a bitch? Feminism and does it have a place in hip hop?
Next Article An Audience With Julian Cope: Unity Theatre, Liverpool