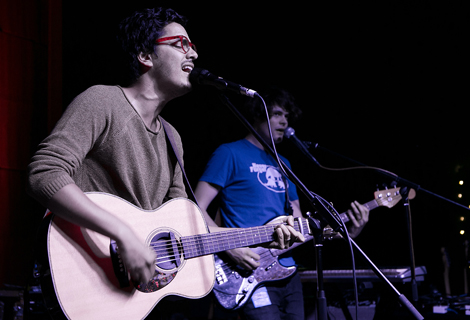 Back for his third show in Liverpool this year, Luke Sital-Singh brings his new album to the Kazimier, Getintothis’ Adam Lowerson is left wanting something more.

‘I don’t like festivals. People are too happy. I want to start a festival with just music like mine, called Depressed-ival,’ declared Surrey singer/multi-instrumentalist Luke Sital-Singh, before trundling along into another slow-burning, melancholic acoustic track from his debut album, The Fire Inside.

The LP received mixed reviews in what has so far been a largely positive year for the folk newcomer, with two impressive performances in Liverpool already earlier this year under his belt, including a set at Sound City, he was also long-listed for the BBC Sound of 2014 award. But as he  alluded to himself tonight, his music isn’t exactly all sunshine and happiness.

There’s no doubt Sital-Singh is dynamic performer. He is joined on stage only by another guitarist, and switches between guitar and piano himself, but his minimalist sound is a sonic rollercoaster, travelling from the quietest, almost bare lows to almighty highs of belted vocals and soaring melodies. The way in which he transitions from delicately picked guitar and hushed, whispered vocals to spine tingling vocal acrobatics almost catches you off guard.

However, beneath the impressive musicianship, the songs feel kind of hollow. Tracks such as 21st Century Heartbeat and Honest Man are reminiscent of the faux-folk style made popular by the likes of Mumford and Sons, it’s a sound tailored for Radio 1. Bottled Up Tight, a warming slice of acoustic pop, is one of the more uplifting moments, although its lyric about downloading the sky is questionable. In fact a lot of Sital-Singh’s lyrics feel as though they could have come from the Penguin book of songwriting. It’s fair to say he’s not quite Leonard Cohen.

It’s not all doom and gloom and cliched lyrics though, as Sital-Singh is a charming showman. His between song chit chat is slightly shy, but warm and witty, and his vocal control and power genuinely is breathtaking. However, the set feels too single paced, and for such a stripped back performance it needs something special to keep you hooked, and sadly it doesn’t quite cut it. Maybe hold off buying your ‘Depressed-ival’ tickets for the time being.

Earlier saw a set from Blackpool singer-songwriter Karima Francis, who performed tracks from her third studio album which is currently in the works. Her sound is, like the headline act, minimalist yet arresting, in no small part down to her soulful vocal which is quite simply stunning. Throughout the set she apologised for being ‘off form’, but if this is her not off the top of her game, we’d love to see her at her best.