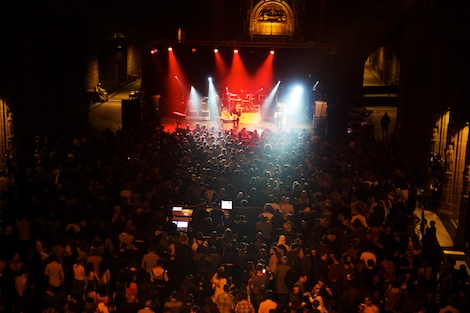 Big hitters in the Cathedral, fresh newies in the Moon Museum and a rousing close in the Factory, Getintothis’ Emma Walsh spirals into dizzying raptures on the closing day of Liverpool Sound City 2014.

Saturday afternoon and the weather Gods had not failed us. Those clever Aussies had brought the sun along from way down under, kicking off their Australian BBQ at Moon Museum with a hearty welcome to Sound Citizens and all rudely awoken neighbours in the area.
Demi Louise eased us into proceedings with some sweetly sweetly acoustic tunes, throwing in a cover of Kodaline‘s All I Want to warm us up for their evening set.
Mama Kin kicked it up a notch with a little more funk and perfect burger-munching, tea-drinking, sun-worshippping sounds. The John Steel Singers followed adding some more sunshine with their upbeat vibes and ‘oo oo oohs’ Beach Boys akin melodies. TGI Tuesday in particularly had hips swaying and heads bopping across the Moon Museum car park paradise.
During The John Steel Stingers set we couldn’t help but notice a strange gent standing in front of the stage, making rather rude gestures toward the band, it turns out that strange gent was Jeremy Neale of the band Jeremy Neale, who not only named his entire band after himself, but also dressed his band in a black and grey uniform while he stands front and centre in a burgundy turtleneck and skinny jeans.
While we can’t say much for the actual music, Neale‘s showmanship was a delight, smiling for the cameras, bouncing around, opening each song with his back to the crowd in a stance we assume he learnt from the Billy Fury statue down the docks. Neale has all the smarm and charisma a frontman needs, he kept us all giggling, but the music was pretty forgettable sadly.
The same could not be said for Dune Rats who rocked everyone’s socks off with a headbanging, cymbal clashing uproar.

Kodaline performing live at the Cathedral
After a footballing interlude in proceedings, our Saturday evening burst to life with one of the biggest names in one of the biggest venues of this year’s festival.
Kodaline may not be able to compete with the artistic credibility of Gruff Rhys‘s or Jon Hopkins‘s of this world, but they are what they are and they do it pretty damn well. They deliver the feelgood, singalong, hands-in-the-air show that you need to pep you back up for the last night of the festival (there’s only so far cider and skittles can take you) and to have all that in the Anglican Cathedral, it’s the best kind of sickly sweet sugar rush.
But there was new poignancy to be found in their pop friendly lyrics in such surroundings, singer Steve Garrigan pointing up into the lofty heights of the Cathedral as he sang “Shit, maybe there is no God in the big white clouds up there“.
Stood atop a very kind bouncer’s chair halfway back from the stage we watched the band in a blur of coloured lights, over the sea of bopping heads and constant mumble of those unavoidable festival going daytrippers who are just there to see the headliners then insist on talking throughout. Thankfully in somewhere as grand as the Cathedral, that incivility can be drowned out. And it seemed the band hadn’t noticed anyway.
Humbled by such a glorious surroundings on their first visit to Liverpool Steve Garrigan admitted it was quite an honour having sometimes played to half empty venues on their recent tour. The Academy just shan’t do next time they come to visit. Oh, and the harmonica rendition of Dirty Old Town was a lovely touch too lads.
Amid schedule reshuffles and overruns the Big Sixes sadly fell victim to the shoulda-woulda-couldas of the festival but thankfully we had Luke Sital Singh to ease the regret. 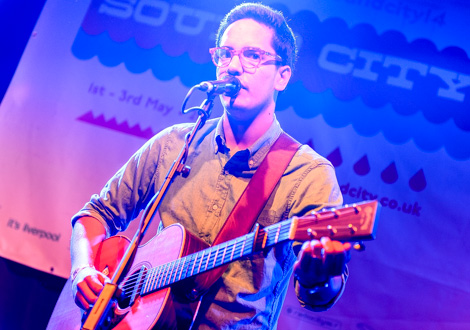 Luke Sital Singh performing live at East Village Arts Club
Starting off so softly softly Singh let rip with a volume and rasp that quite literally jumped the front row back to life at the East Village Loft. After such a diverse run around the festival it was almost quite refreshing to watch a man with a guitar and a store of well written songs – there is nothing boring about this singer songwriter. With an awkwardness that at first comes across as rude, Singh draws the audience under his spell with stories about a lost whale named Luna and his secrets to combating facial sweating onstage, but ultimately its the songs that win hearts.
Fail for You and Nothing Stay the Same are tunes that will catch your ear on the radio but hearing them live has a much greater impact, you can’t help but hold your breathe when Singh brings his voice to a whisper.
To go from that to Heebie’s Basement to hear meaningless words recited over a track with all the soul of an empty tin can, it’s a bit of a downer, but NINA saved herself by closing with an electro cover of Fear the Reaper. 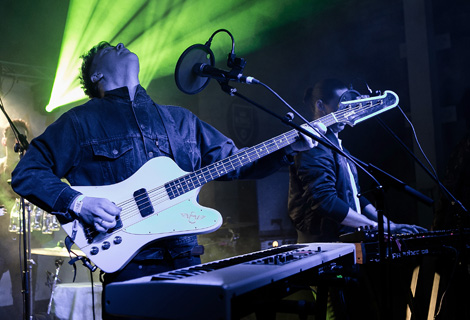