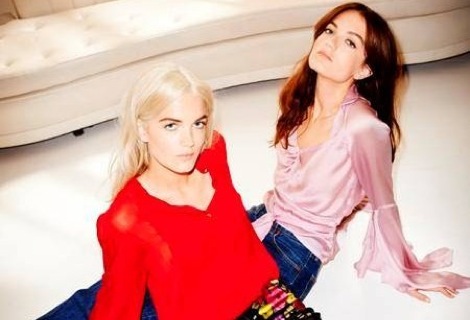 Liverpool Sound City 2014 welcomes a deluge of overseas talent from May 1, Getintothis’ Mike Townsend selects ten of the best.

From its Australian BBQ to emerging superstars to buzz bands and Korean showcases, Liverpool Sound City is never short on delivering an insight into fresh new international music.
As is customary, Getintothis has sifted through the exhaustive line up and delivered our not-to-miss offerings from this year’s international offerings.
Courtney Barnett at the Zanzibar on Thursday May 1, 12.15-12.45am
From Melbourne, Australia, Courtney Barnett‘s deadpan drawl has shuffled it’s way across the world in the form of the astonishing 2013 single Avant Gardener. Don’t be fooled by the whole slacker thing though, her late night appearance at the Zanzibar on the Thursday will be one of the tightest, and most earnest you’ll see all festival.

2. Tennis at Factory on Friday May 2, 9-9.30pm
I know what you’re thinking: Husband and Wife duo calling themselves Tennis? No fucking way. With two albums on the excellent Fat Possum in as many years, the pair from Denver know their way around a tune better than they do a decent haircut. The difference between being twee and endearing is hooks, and their set at The Factory on Thursday will be packed with them.

3. The Hold Steady at Duke Street Garage on Friday May 2, 1am-1.45am
You won’t find a set of lungs more polarising than those of Craig Finn‘s. There’s no such thing as a casual Hold Steady fan though, prompting quick dismissal alongside heartfelt devotion equally across all corners of guitar music.
New album Teeth Dreams adds nicely to their unrivalled, and probably seminal body of work, and will turn The Garage into a rowdy, crazed beer house in those early hours on Saturday Morning.

4. DZ Deathrays at Duke Street Garage on Thursday midnight-12.30am
Guitar music is given a good showing at this year’s festival, and Australian thrash pop duo DZ Deathrays are no exception. The no thrills guitar and drum set up ensures not a note is wasted, with their live show verging on all out assault. It’s fuzzy, it’s messy, it’s chaotic, but when that sea of cymbal crashes and feedback hits you on the Thursday evening, it will make more sense than anything in the world.

5. San Fermin at Liverpool Cathedral on Friday May 2 8-8.30pm
If chamber pop is a term you’ve recoiled at before, you haven’t listened to Sonsick; the stunning debut single from Brooklyn eight piece San Fermin.
Their album wanders through touching moments of reflection, like the moving ballad Methuselah, and rousing, powerful anthems like the aforementioned Sonsick, tackling a huge range of soundscapes with blistering abandon. The Anglican will be the perfect setting for them on the Friday evening.

6. Say Lou Lou at Liverpool Cathedral on Thursday May 1, 8-8.30pm
After their BBC Sound of 2014 nomination, theses Swedish-come-Australian sisters have done nothing to avert our gaze. Beloved and Better In The Dark were two of the best tracks of 2013, moving between the powerful and the vulnerable to create some of the finest and most disarming pop music all year.
There aren’t too many in the UK who can claim to have seen them live at the moment, and you’d be a fool to sleep on this one.

7. Nozinja at The Kazimier on Thursday May 1, 1.30-2.30am
The man behind Shangaan Electro, the South African electro folk sensation, needs little introduction.
Nozinja has spearheaded this 180 bpm movement as its gripped the UK over the last couple of years. And if you’re unlucky enough to know someone who attended their last show at the Kazimier, you won’t want to miss this solo performance, if only so you can finally shut them up about it.

8. Pearls Negras at the Kazimier on Thursday 12.30-1am
Teenage hip hop trio Pearls Negras are at the forefront of Brazil’s emerging talent, forming from the ashes of Rio’s disaffected youth culture. Vibrant, samba backdrops work with more western hip hop aesthetics, framing their aggressive, politically conscious lyrics in a way that, even if you don’t speak Portuguese, will have the The Kazimier stunned on the Thursday.

9. Eyedress at the Kazimier on Saturday 12.30-1am
The Guardian has called him ‘gently disturbing’, and the soundscapes that have emerged from this Philpino producer’s laptop will certainly leave a chill in the air.
Those looking to endure will find beauty in the fog though, with tunes like Nature Trips and the remarkable Everything We Touch Turns Into Gold presenting him as one of the most interesting producers about right now.

10. Gengahr at The Kazimier on Thursday 7.30-8pm
With just a handful of demos, North Dakota guitar group Gengahr have been shuffling their way confidently through the indie landfill this year. Tunes like She’s a Witch and Fill My Gums With Blood are impossibly catchy, and will be commanding bigger audiences than The Kazimier in twelve months time.
There is always a handful of ‘I was there’ moments at every Sound City. This one is a banker.