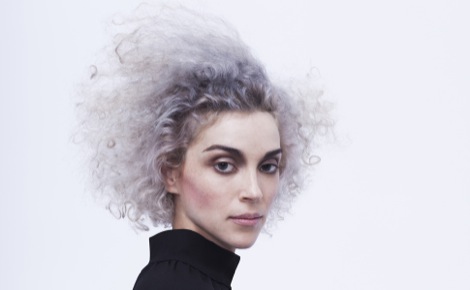 St Vincent to play Harvest Sun summer date in Liverpool. Get in.

We love St Vincent on Getintothis.
So we were overjoyed when news broke that St Vincent is to play Liverpool’s O2 Academy on Thursday August 28.
Annie Clark‘s been making profoundly moving music since her days as Sufjan Stevens‘ touring band right the way through to this year’s superlative self-titled fourth studio album.
Showcasing her diverse stylistics, St. Vincent is a marked departure from anything she’s done before oozing with upbeat electronic party vibes yet imbued with the evocative orchestration we fell in love with in the first place.
Annie Clark plays a mean guitar. Annie Clark sings like she fucking means it. Annie Clark is one of planet earth’s finest songwriters. Annie Clark is invited to play Nirvana at the Rock & Roll Hall of Fame. Annie Clark can also do football. We love Annie Clark.