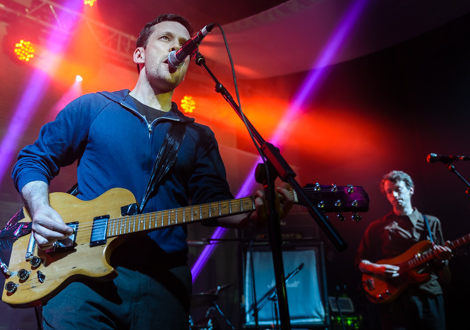 Over ten years on from their debut, The Decline of British Sea Power, the Brighton art rockers remain one of Britain’s most interesting bands.
A decade ago the likes of Razorlight, the Ordinary Boys and even the Libertines seemed to be at the vanguard of a new wave of guitar groups but it’s BSP whose self-created world of ornithology, coastal erosion and public information films which now seem closer to the zeitgeist than ever.
We have always found them a powerful and dramatic live force: from their early days of foliage and flag waving to their fascinating film soundtrack work on the Man of Aran and From The Sea To The Land Beyond, BSP have always displayed the kind of pluck, derring do and fighting spirit you’d imagine would have been admired by cross-channel swimmer Captain Webb who is the subject of BSP‘s latest film collaboration. 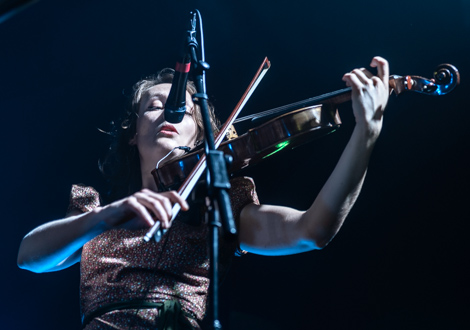 Abi Fry of British Sea Power live at East Village Arts Club
It’s clear from tonight’s near-sold out gig that many fans, old and young, feel the same but then BSP are just the kind of band to induce the kind of fanatical support that inspires the middle aged couple in matching ‘heron addict’ t-shirts next to us to bellow along to each song while holding hands.
From instrumental opener Heavenly Waters (an early b side) through a wonderful waltz through their first single, Fear of Drowning, BSP tonight pick their way through the exemplary highlights of their five albums to date with Yan Wilkinson a beguiling and bewitching guide out front.
Adding Abi Fry‘s violin, the band is an effective a live proposition today as they have been for years with the bearded Martin Noble looking more like an Artic explorer than the understated guitar hero he undoubtedly is.
At times the effect is dizzying: imagery comes thick and fast, both from Yan‘s idiosyncratic lyrics and the stunning visuals which transplant the EVAC into some strange netherworld of rambling holidays, real ale and motorick Krautrock.
As the likes of Waving Flags, It Ended On An Oily Stage and Remember Me soar into the night, it’s a place we and many of the audience here would happily set sail for. 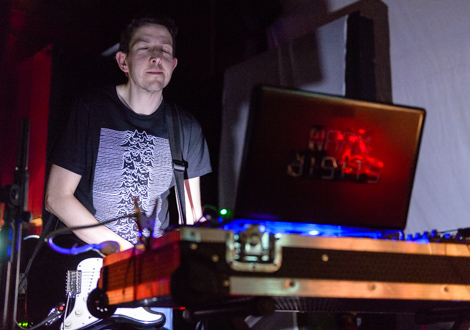 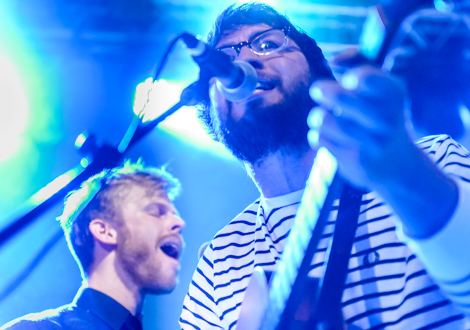