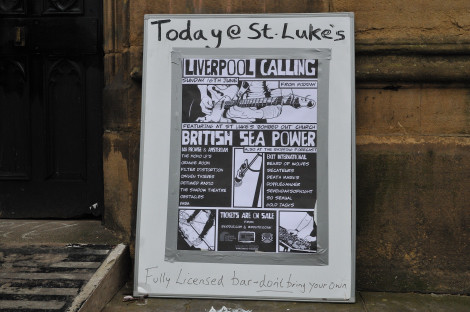 If there’s one thing we can thank the Nazis for (wait…) it’s that they didn’t have the guts or the wherewithal to finish off the beautiful and monolithic St. Luke’s Church.
As the bombs dropped during their non-prejudicial Blitz campaign of 1941 and a good portion of Liverpool and her docks burned, the church, now sans its roof, stood firm.
Fulfilling its destiny as a beacon of hope for those in fear or facing any number of struggles, it meant its present and future followed in same vein.
Nowadays, it represents a main artery in the beating heart of Liverpool’s creative community. Liverpool Calling was another event that drew all kinds of people from far and wide to partake in a very modern form of worship.
Don’t allow the legal disclaimer you have to sign upon entry to put you off; the church is sturdy, resolute and attractive to this day.
Not even the deep amplified rumblings of the day’s many bands and hundreds of pairs of feet presented any worries. 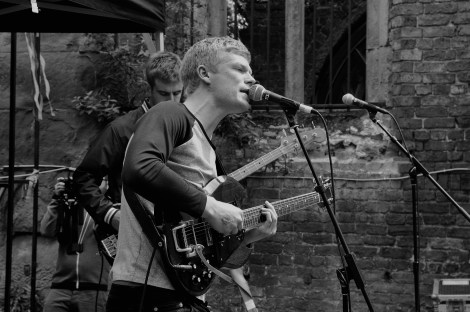 Oxygen Thieves set the bar high at Liverpool Calling, St. Luke’s Church
Oxygen Thieves look very much like the epitome of the ‘us-against-the-world’ mentality that inspires most people to start a band in the first place.
With songs of the calibre as the wilfully propulsive and energetic Maskara in their arsenal, the Wirral four-piece fail to live up to their moniker by name or by nature. Rather, they’re one group you’d want back in your local atmosphere time and again.
The Mono LPs are very much a Liverpool band. Take from that what you will, but their fast-paced, breathless racket comes replete with the spirit of the city; a never-say-die, fuck-what-you-think attitude that has rightfully won them a spirited and plaudit-laden following.
It’s not difficult to see how and why a buzz permeates their existence. Die A Little Death is sprightly, angular and, thanks to its repeated eponymous refrain that forms the chorus, offers enough in the way of sing-a-longs to get all and sundry involved. 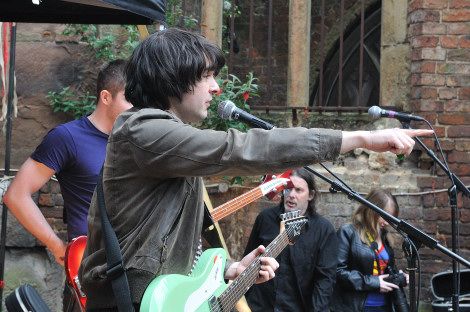 The Mono LPs’ frontman Ste Reid points the way forward at Liverpool Calling
Frontman Ste Reid is the personification of the group’s songs; combative, confident and willing to muck in.
To his right sat cellist Vicky Mutch. Alas, what looked like an energetic performance on her part was dampened somewhat by a lack of volume. Shifting winds and the open air swallow of the venue put paid to a good portion of her contributions.
Nothing to apportion blame to, of course, and if anything it might make you drag your arse to their next indoor gig to get the full story.
Not wanting to be found resting on their laurels, Liverpool Calling had established a second base in The Shipping Forecast. A host of bands plied their trade, two of which, Deaths Masks and So Sexual, staked further claims for a prominent place in the latest wave of Liverpool groups.
The former, bringing forth polished pop mores with a dark twist, built on an already excellent 2013 by way of a masterclass in how to get the simple things right first.
Having already played to a bustling stage at last month’s Sound City, it looks as if it might be a case of when and not if they break out further.
So Sexual, lovelorn disco-poppers, inflect their music with healthy doses of The Cure and a smattering of the best of the 1980s New Wave movement.
Vocalist and guitarist Peter Seddon has that whole ‘smouldering frontman’ business down to a tee, while Jay Dyke wreaks all kinds of welcome havoc on his box of tricks masquerading as a keyboard. 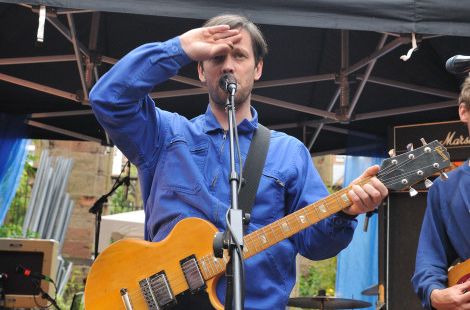 British Sea Power looked far and wide during their set at Liverpool Calling
…but it was back to St. Luke’s to catch the venue’s headliners (and perhaps quite a coup overall) British Sea Power (BSP).
Announcing their arrival loudly a few years back with their still-infectious debut LP The Decline Of British Sea Power, the Kendal group have set about quietly carving themselves a comfortable niche.
Plenty of their hardcore fans took their places at the front and revelled in a set that saw the group plough through classics such as Remember Me and Apologies To Insect Life early on.
With vocal duties swapped regularly between brothers Yan and Neil Wilkinson, BSP showed that they still have the vitality and urgency that brought them to our attention.
And yes, they still have big mad dancing bear that comes on stage too. Who said familiarity bred contempt?
Pictures by Getintothis’ Gaz Jones.