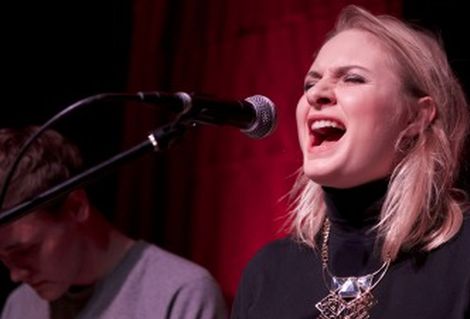 Lapsley is Merseyside music’s hottest artist right now, yet with just a handful of tunes to her name the weight of expectation seemed a tad unfair, Getintothis’ Laurie Cheeseman reports on her debut performance and finds an artist seemingly ready to lap all up.

Tonight something special is happening in Leaf on Bold Street. Anticipation is palpable in the air.
Most gigs that start an hour late are full of jaded punters, but not this one. For this is Låpsley’s debut show. Given the context it’s amazing how much buzz she has accrued from just a few posts spread over four months on Soundcloud. She already has more followers on that platform than many of FACT Mag‘s usual darlings.
But boy, does she prove she deserves it with a captivating set, and if anything were to go wrong, ‘it’s for artistic purposes‘, we’re assured. Where many of her peers would be daunted by the level of interest, for her first gig she doesn’t lack any confidence. In fact, she revels in the occasion.
A revered hush descends as she takes to the stage. Most people still riding the post-bass, wonky-R&B wave would be lampooned for their lack of imagination, but Låpsley brings a new dimension to it; surely a factor in the love she’s been receiving.
Sure, she’s got the spoons-as-percussion thing going on; sure, she’s got the throaty, mournful vox going on; sure, half the music feels like it’s coming out of the floor, not the speakers. What it is that’s different, is simply her personal touch.
Confidence mixes with guile during a track written not four days ago – ‘Falling Short‘ is sweetly ramshackle, giving some unexpected bile to what could easily have been overly maudlin. Is this another of her secrets to success?
Shortly after, her beat-making sidekick leaves her to do perform a solo acoustic bedroom R&B number song which slowly mutates into a rendition of that most evergreen of sing-alongs, ‘Let It Be‘. 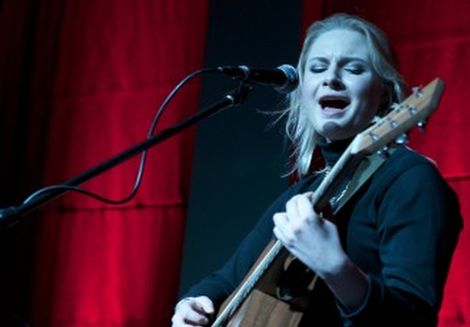 Lapsley has that feeling that anything could happen which combined with her relative mystique, probably not done fashionably Burial-style but more a product of her only being about for a matter of months, lends her an added dimension beyond being James Blake without a Y-chromosome.
It’s raw, not pastiche, contrived or saccharine.
Her compadres for the night are all completely different from one another, spanning the musical spectrum, but united by their desire to do something a little bit different.
This runs from Cavalry‘s jangle-folk that sounds like a jumper your grandma knitted straight outta the forests made of fake plastic trees through to the Mono LPs proto Led Zep funk anchored by the addition of the cello. 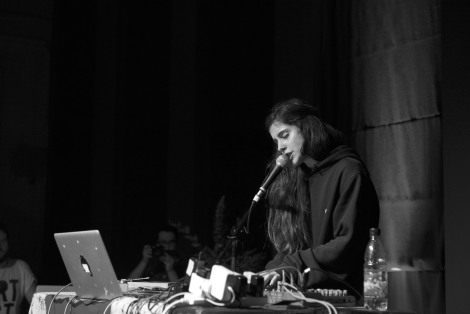 Nadine Carina mixing it up on the night, live at Leaf Cafe, Liverpool
However, it is former GiT Award nominee Nadine Carina who comes nearest to toppling Låpsley from her throne.
Who else could get away with live-sampling a lamellophone and little xylophone-style thing and warping the whole thing into a beautiful, ghostly mess over skittering beats? That’s right, just Nadine.
Great things are expected of Nadine, and we’ve a strong suspicion the same can be applied of Holly Lapsley Fletcher. Here’s to a top 2014 for all concerned.
Pictures by Getintothis‘ Gaz Jones
Further reading on Getintothis:
Getintothis’ Liverpool music’s ones to watch 2014 features Lapsley
GhostChant readies debut album Sincerity with guest Låpsley
Getintothis’ Live gig review of Nadine Carina’s appearance at Liverpool X
Nadine Carina releases new single ahead of her EP, Getintothis reports