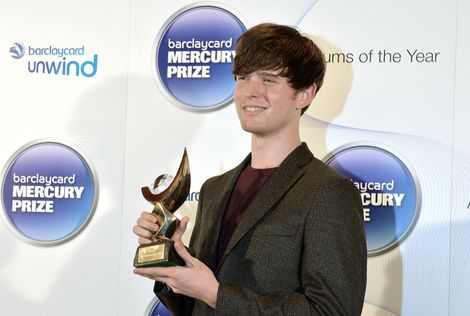 The big winner following James Blake‘s Mercury Prize triumph was the bookmakers.
The 25-1 bookies outsider scooped the Mercury for his second album Overgrown, seeing off the challenge of David Bowie, Arctic Monkeys and favourites Laura Mvula and Disclosure. And it seemed, Blake was a surprise to many, including himself, admitting he too had ‘lost a bet,‘ finding the result ‘very strange‘.
Even the characteristically indefectible Mercury host, Lauren Laverne lost her words momentarily introducing Blake as fellow singer James Blunt. Beautiful irony indeed.
And yet, as the dust settles, Blake’s victory was perhaps not just an obvious decision for the judging panel – but a very shrewd one at that. Blake’s victory may not have leapt off the page prior to last night’s announcement but in retrospect the result ticks almost every box for the Mercury, and certainly captures the essence of this year’s largely conservative nominations shortlist.
He is an artist who is, career-speaking, clearly on the ascendency: his DJ slots sell out almost instantaneously, he has headlined boutique festivals (like Festival No. 6 – which are prime Mercury demographic) and his album Overgrown had a UK chart high of #8 – one place higher than his eponymous debut. Perhaps more crucially Overgrown charted in the EDM-fixated States at #32; a huge leap forward when compared to #123 on the Billboard charts for his debut.
For while the Mercury prides itself on serving up a wide spectrum of nominees, there’s no doubt they want recognition and acceptance from the music industry when presenting the eventual winner.
“It’s great that Speech (Debelle) won (in 2009),” said Peter Quicke, MD of her label, Ninja Tune / Big Dada to Vice.
“But, as we discovered, Speech was not a populist choice – the record didn’t sell massively. We got the distinct impression that the Mercury Prize didn’t like the fact that the album didn’t go on to sell well, and it seems to us that the shortlist has been more commercial or populist ever since. It seems it’s clear the prize is about big popular records now, not interesting music. I don’t think Ty (nominated in 2004 for Upwards) or Speech would be nominated again.”
And here’s where the Mercury have been extra cute.
In recent times they have been openly criticised for their lack of electronic artists represented on the shortlist – indeed 2012 saw no ‘dance/electronic’ acts makes the final 12. Yet Blake not only ticks the necessary electro box – he is also an artist wilfully progressing from his dubstep roots, into an altogether differing terrain.
However, this is exactly why the Mercury judges have reached this year’s final decision incorrectly – Blake’s album Overgrown is crucially his weakest recorded output. That’s not to say it isn’t good – it is. Yet compared to his debut – and indeed the earliest EPs; The Bells Sketch, CMYK and Klavierwerke it falls considerably short.
And that’s a measure of this year’s shortlist. The same is applicable to Foals‘ Holy Fire. Similarly, Laura Marling‘s Once I Was An Eagle. And Villagers‘ Awayland. And most ridiculously of them all David Bowie‘s The Next Day – a decision to include him at all seemed tokenistic and headline grabbing from the outset.
Indeed, it was this conservatism which led to the mini fuss in the build up suggesting the Mercury had lost it’s way by presenting a largely predictable shortlist (Getintothis guessed eight of the 12) and yet, had the judges been just that little bit braver and awarded the £20k cheque to Jon Hopkins‘ Immunity – an album which could win any year – then perhaps they’d have won over a huge proposition of their critics.
Instead, we’re left with safe James Blake – a fine artist, one with a hugely bright future ahead – and whether we saw the outcome or not we didn’t need the Mercury to tell us otherwise.
Further Mercury Prize reading on Getintothis
The Mercury Prize 2013 nominations announced.
The Getintothis Predictometer for the Barclaycard Mercury Prize 2013.
Alt J win Mercury Prize 2012 – What have we learnt?
Mercury Prize 2012 nominees announced.
The Getintothis Predictometer for the Barclaycard Mercury Prize 2012.
PJ Harvey wins the Mercury Prize 2011 – what have we learnt?
A Getintothis reflection on the nominees for the 2011 Mercury Prize.
The Getintothis Predictometer for the Barclaycard Mercury Prize 2011
Getintothis on the Mercury‘s 2010 and why common sense prevailed.
Getintothis on the Mercury‘s in 2009… and reaction.
Getintothis on the Mercury‘s in 2008.
Getintothis on the Mercury‘s in 2007 – why bother? and 2007’s worthy winners, not that we were arsed.