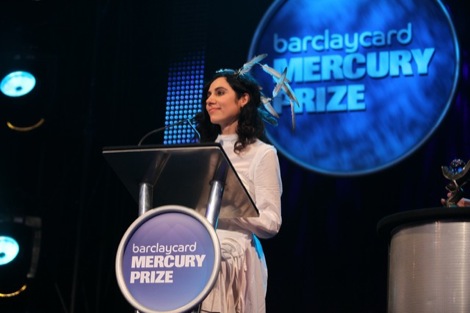 PJ Harvey bags the Mercury Prize for the second time in her career. But was it the correct choice? And is the album dead? And is Alan McGee the music world’s biggest whopper?

By now the world and his dog know PJ Harvey has won the 2011 Mercury Prize. They’ve blogged on it.
In fact they probably blogged on it prior to Jools Holland‘s cake hole blabbing the predictable news such was the acclaim showered over Peej’s eighth studio album Let England Shake.
The consensus is that she fully deserves the accolade, an achievement which marks her out as the first artist in the Prize’s 20-year history to lift the crown twice. It’s highly unlikely Talvin Singh will draw level.
Getintothis‘ take, it’s a fine album, albeit one which resonates with the war-torn times we live in, and coming just a couple of weeks since the riots which did literally shake England, the record seems more pertinent than ever.
Yet despite the mini hoo-ha over last night’s presentation, it’s hard not to think this year’s Prize was perhaps the blandest in a long, long time. The BBC thought so, reducing coverage to a mere 30 minutes. Miranda Sawyer and this year’s zeitgeist-busting urban DJ must be livid at not being able to dribble on for an hour about Adele‘s ‘achingly beautiful’ bellows or Elbow‘s ‘sonic cathedrals’ of noise.
But without dissecting the predictability and almost comfy position the Prize finds itself in, there was a bigger issue – the supposed death of the album.
In the build up to the award a whole host of industry types, musicians and former nominees – Pulp‘s Jarvis Cocker (representing the arthouse intellectuals), Elbow‘s Guy Garvey (representing the everyman rocker) and Catatonia‘s Cerys Matthews (representing the drunken housewife) – spoke how the Mercury Prize was to be championed as it was one of few beacons of light preserving the sanctity of the long-player.
Jarvis, speaking on radio’s spiritual retirement home for cool old blokes, BBC 6Music, remarked that the album was a dying format – ‘it’s just not what it was, people don’t think about albums as a whole.‘ He then, reaching for his cup of Horlicks, proceeded to wax lyrical (pun intended) about the virtues of vinyl, how CDs are crap – they’re made of plastic and break easily – and usually boast singles and then a lot of fodder.
Far be it for Getintothis to disagree with the Legend of Cocker, but this argument is frankly bobbins. But he wasn’t alone – far from it. Garvey, Matthews, DJs including Mercury Prize television host Lauren Laverne, Mark Radcliffe, Stuart Maconie – all established names, with influential clout, far-reaching knowledge and big passion for music, jibber jabbered on about the demise of the album.
Are they forgetting that early albums from the likes of The Beatles, Led Zeppelin, Rolling Stones, Elvis, The Kinks, The Who and a whole host of classic bands from a golden age in music broke through with albums almost entirely shaped around singles. Their supposed ‘classic albums’ almost always arose later in their careers. Indeed, the album format has developed substantially during the last 20 years.
Getintothis‘ top 10 UK debuts of all-time aren’t a reflection on this writer’s age, but more a reflection on contemporary artists thinking more about the album as a whole. And if the album is such a dying format why are there more produced, recorded and stocked than ever before?
Push things forward to Tuesday night, and there’s Polly Jean, dressed as a crow stuck in a hedge, stalking to the stage – and the Toby Jug resembling Jools – to collect her Prize, and what does she say, ‘I wanted to make something meaningful, not just for myself but for other people, and hopefully to make something that would last.‘
This incessant talk of album longevity is bizarre. If albums are to musicians, what paintings are to artists, then the music world; listeners, musicians, labels and everyone else connected truly is fucked.
Despite the creation of the phonautograph in the 1850s, it wasn’t until the release of The Voice of Frank Sinatra in March 1946, that the ‘pop album’ as we know it was conceived.
The cassette followed in 1962 while The BeeGees‘ Living Eyes was the first album ever manufactured on CD – for demonstration purposes (as seen on the BBC program Tomorrow’s World in 1981) and featured on the inaugural issue of the Compact Disc trade magazine.
So by that very assumption the album – whatever the format – and depending on who you listen to, survived a mere 65 years.
But all this talk of ‘death’ is nearly as dreary as the live performances on display on Tuesday night (really, what was that tinker Gwilym Simcock doing fingering the inside of his Joanna?). And factually incorrect – with album sales actually on the up. Only just, I hear the cynics, counter. But whatever the rise/slide in sales suggest, the album format is very much alive and kicking. Just don’t expect too much of a boot from this year’s Mercury Music nominations. 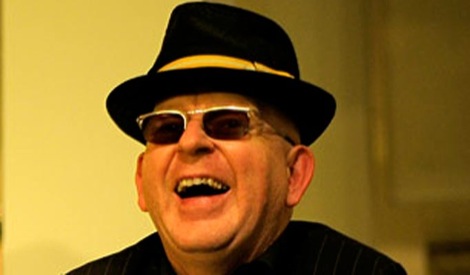 Alan McGee – the laughing fool.
Footnote: While we’re on about grim affairs: Alan McGee.
The pork-pie sporting uber-gob has come out with some top-draw bullshit in his time but his latest remarks on the fire at the Sony/PIAS warehouse which saw which saw millions of records destroyed is truly raising hell.
The former Creation boss is quoted as saying: ‘I read that the Sony PIAS Building burnt down. I’m probably the only person who thought that was funny. I call that a result. Got rid of all the shit music. And you get paid for it, the stuff you couldn’t sell.‘
That’s despite PIAS saying the insurance won’t cover the damage and the numerous independent labels on the brink of collapse, not to mention the thousands of artists, industry figures affected.
Perhaps, it’s worth McGee pondering from his self-appointed lofty position, what would have happened had the building that stored Screamadelica or Definitely Maybe‘s master tapes gone up in smoke? Perhaps doubtful the clown’s comments would have ever seen the light of day.