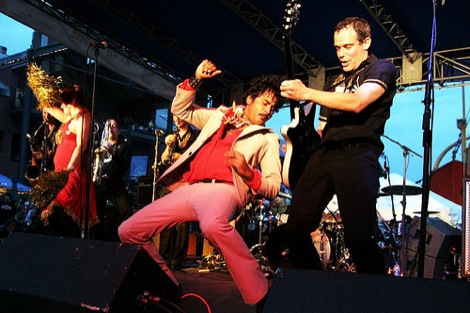 Imagine Roky Erickson backed by the Sun Ra Arkestra or Wilson Pickett and The Velvet Underground, or picture the love child of Anubis and Kali.
A fantastic image, isn’t it? Well, King Khan and The Shrines will be bringing all of that and more to Korova on Wednesday April 23.
King Khan & The Shrines is more than a psychedelic soul band with a spectacle of a stage show. They are a cult musical phenomenon with more than 10 years of international touring, multiple studio records and a fan base of fervent punk, soul, free jazz and garage rock heads.
Their latest album, this year’s Idle No More, is an unforgettable lesson in all of the above, with a shedload of dramatic flair and musical integrity thrown in.
Make sure you’re there in April at Korova for a show that will offer a transcendental experience to those lucky enough to be standing in the light.

Further reading on Getintothis:
Liverpool’s gig calendar 2013: Guide to essential gigs not to miss the rest of this year
Findlay to crash land into Korova with November date
Prince: Groovy Potential