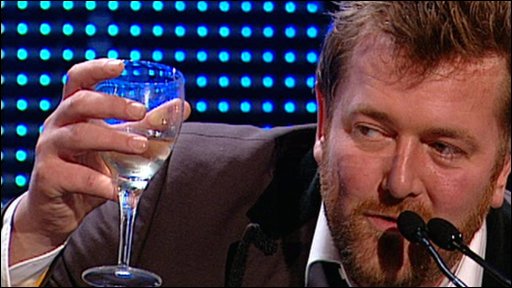 And the winner is…

In recent years we’ve vented enough spleen about the waste of everyone’s time music awards actually represent.
But credit where credit’s due, not only have the Mercury judges selected a worthy winner last time round, they’ve also plumped for an honourable bunch of potential winners this year.
Sure, there’s the two token nominations for the avant-jazz and alt-folkie, just to make sure they tick every box necessary in order to cover every base in the business, but compared to the deplorably insipid BRITS – a show which isn’t even laughable for its tastelessness or onstage tomfoolery anymore – the Mercury Music Prize is at least an honour worth collecting, and indeed worth watching despite Jo Whiley‘s Terrahawk face being beamed into your living room for over an hour.
So unlike other years where I’ve offered an alternate guide to who should be collecting the prize here’s a brief prediction on who will win, who won’t and why. You can guffaw in my direction at approximately 10pm tomorrow when I’m wrong.
The losers:
* Let’s be frank, Sweet Billy Pilgrim and Led Bib have about as much chance of winning as Robert Mugabe has at scooping the Nobel Peace Prize. The former champion banjos and the latter abstract jazz spazzouts and while I’m down with both, the Mercury’s have got a new sponsor in the shape of Barclaycard – and call me a cynic but I can’t see either showing off their bumper payday infront of a 20-foot blue and white cheque.
That said, remember Talvin Singh.. No, thought not.

* Speech Debelle and Lisa Hannigan are two of the FIVE female leads represented in the 12 albums nominated and unfortunately for them both are too leftfield to scoop the prize. The former simply because Speech Therapy ticks similar boxes to those listed above with the two rank outsiders; if the prize was based purely on music – and nothing in this business is – then she’d be way in the running, but a black, hip-hop star on Big Dada aint gonna be lifting no award.
Hannigan, meanwhile, is the yin to Debelle’s yang, if anything she’s too fresh, clean and pretty for an award which likes to think itself edgy and cool. The Mercury isn’t, it’s more Observer Music Monthly, than Vice, but for Hannigan’s play-it-safe loveliness she’ll miss out for ultimately being the nice girl next door.

Lisa Hannigan’s Sea Sew reviewed.
* NME darlings Kasabian and Glasvegas have united small stadiums in recent months, but neither will win. Kasabian, despite the slightly progressive inventiveness of West Ryder Pauper Lunatic Asylum, are too far on in their career and the natural heirs to the Gallagher’s crown for success to change anything. They simply don’t need the Mercury.
Neither do Glasvegas, hype as overshadowed their so-so debut but they’ve already accrued a ridiculous following – not to mention U2 support slots – so this is a band that have garnered support – and time to develop – without the need to drown in more questionable superlatives. Next time round maybe, just so long as they improve.

West Ryder Pauper Lunatic Asylum reviewed.
* Another big outsider, The Invisible, would be a grand surprise if they were victorious but it’s hard to see that happening. Again, they’re uber-cool, incredibly diverse and their debut on Run is a superb cocktail of funk-infused urban nightmaretales. But, and it’s a big but, The Invisible, unlike say Antony (and his Johnsons) don’t have an image or story which can be sold to the press. They’re once again a fine collection of musicians simply too faceless for anyone in mainstream land to care. If this sounds like a grim diagnosis just wait and see.

* Friendly Fires and The Horrors are the complete opposite to the above – hugely marketable, reknowned for their incredible fireworks on stage and their records are on the fringe of everyone‘s lips. There’s not one reason the St Albans lads or their darker Hoxton cousins shouldn’t win – but it’s more due to what 2009 represents (see 2006 (Arctics) and 2007 (Klaxons) for prime examples) as to why they probably won’t be on that stage next to old Joolz come speech time. Both are hugely worthy winners – indeed FF was fifth in our top 100 of last year – but I just don’t think they’ll do it.
The Horrors: Primary Colours reviewed
Friendly Fires reviewed

* No, 2009 is well and truly the year of Women in Pop. And any one of three could scoop the prize. But the two that’ll miss out are La Roux and bookies favourite Florence and the Machine.
Once again, both are hugely deserving winners, not least because their records are fine indeed, with the latter just pipping her quiffed peer in the consistency stakes. But there’s a fine line between winning and merely taking part, and it’s La Roux and her partner in song, Ben Langmaid‘s slight lack in perfection which could see the prize go elsewhere. La Roux packs a meaty punch in the singles stakes but there’s a sniffle of fluff round the electro edges which gives the edge to her Mercury rivals.
The same can’t be levelled at Flo Mo. No, Lungs is a beast of a record, but she’s been so omnipresent since her Brit Award for best new thang back in February, that it’s hard to see the judges backing her with a Mercury to pair up on the mantlepiece.
Sure, it’s a soft reason, but it is a reason.

* And the winner:
BOOM TISH!
Natasha Khan – or Bat For Lashes as she’s known to the postman.
Yes, Two Suns ticks every conceivable box there is to winning the Mercury:
i) Absolutely stunning, slightly out-there, experimental music backed by stunning production from the uber-hip Faultline (or David Kosten as he’s known to his milk man) and presented to us the listeners with a most beautiful, slightly oddball musician. BLING!
ii) Like her contemporaries, Natasha is also a member of the MWV Club thus meaning she’s utterly 2009 (bear in mind the NME has just announced its first female editor) and is the apex of the Lily, Amy, Adele, Kate molehill that the industry has been building for years. If a woman doesn’t win it this year you’d think John McCririck was running the shop.
iii) Guests are good, and Natasha has wheeled in the best of now and then – Yeasayer feature on a handful of the tracks while Scott Walker lends his pipes to the final track, The Big Sleep. Guests means prizes.
iv) Finally, and this is another bit of cynicism sneaking in, Two Suns is set for a two-CD deluxe edition re-release this week. Coincidence – or perfect timing?
Over to you Jools…