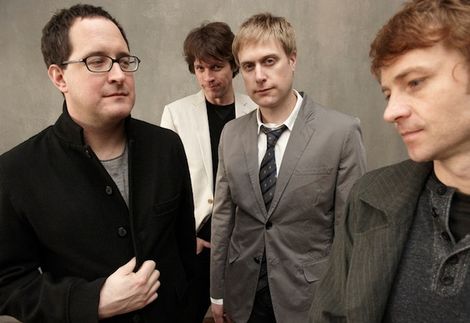 The Hold Steady are one of Liverpool Sound City’s heavyweight bookings Getintothis’ Paddy Hoey speaks to Craig Finn ahead of their show in the Garage.

The people programming Sound City played a blinder when they decided to host American rockers The Hold Steady in The Garage in the early hours of May 2.
That’s because the confines of the Garage will allow the Brooklyn five-piece to show exactly why they have been dubbed America’s greatest living bar band.
Equal parts Springsteen-style classic rock and Mid-Western melodic hard core – what sets them apart is singer Craig Finn‘s remarkable lyrics that evoke a universe of underclass losers, street hustlers and dealers.
The band have released six albums in 10 years, the latest of which, Teeth Dreams, released in March, examines anxiety and the modern American condition.
Finn, on the phone from his Brooklyn home says it was a chance meeting at a party that set him on his latest ruminations.
He said: “I met a doctor at a party and he said that the majority of his visits were for anxiety, and stress-related illnesses. I began thinking that we are living in pretty anxious times. Then, pretty soon after I was in Oslo and I saw (Edvard Munch painting) The Scream, and saw he was reflecting on anxiety with industrialization in the 1900s, so there was nothing new about it.”
“I reflected a lot more about the fact that we are way more self-aware about anxiety and that perhaps we are fostering or nurturing and giving it that respect.”
Teeth Dreams is another brilliant lyrical performance from Finn, littered as it is with references to “that American sadness” and a sense of claustrophobia, devastation and death.
The opening track I Hope This Whole Thing Didn’t Frighten You sets the tone, with neo-Nazi skins getting out of jail and setting up camp in a bunker by the river, with bullet proof vests and gas masks, Finn‘s narrator notes, “Jesus, this might be a mess.”

On Teeth Dreams, a reference to anxiety dreams, Finn hones in on his personal insecurity and the encroachment of technology in everyday life.
“I was wondering a lot about social media, it was almost like a theory or a thesis about the projection of ourselves out there. I’m not on Facebook, but I am on Twitter all the time, even if I am not tweeting. I find it interesting when you read the tweets of people that you actually know.
“You see someone post a picture of themselves on a mountain top and they are 40lbs lighter and nine years younger – and you realize this is a projection of how they want to be seen. I think this plays into the anxiety we are all feeling, especially when there is an anxiety about the challenge of keeping pace with social media and technological change.”
As a songwriter, Finn is light years ahead of almost anyone else working today. His world of desperate chancers and outcasts owes as much to short story writers like Raymond Carver or Damon Runyon, while his own frames of reference are also cinematic.
“I love (film director) John Cassavetes because of the palpable tension. But, I also love Tarantino because I am a sucker for campy violence.”
“I always think that people that are trying to make something happen are the most interesting. Desperate people make bigger moves.”
“Like, this morning I went to the post office and then went to the grocery store because we were out of coffee – but that would make a terrible song.”
If it all sounds a bit arch, a bit literary. Musically the band are the perfect embodiment of both classic rock and 80s college rock before it went overground.
If you are looking for a synthesis of their sound, then go to a place where the Hold Steady‘s Minneapolis forefathers, the Replacements and Husker Du meet early REM, with the crunching melodic rock riffs of Cheap Trick and the overarching celebration of working class life that is embodied by Springsteen.
The Hold Steady are too classic rock to be truly indie, and yet still too obscure in their references to be a true classic rock station act.
Finn‘s reverence for Springsteen can clearly be seen in a remarkable piece of fan shot YouTube in which he sings Rosalita with the Boss at a New York tribute concert in 2007.
While an all star cast lines up to sing coolly along with New Jersey’s favourite son, Finn resembles some demented superfan, singing his verse and chorus with gusto and the demented arm shaking enthusiasm only the truly devoted can muster – to the obvious delight of the song’s writer.
We’ve all dreamed of doing something similar.
Finn says: “That was something incredible. Do you know how many times that I sang Rosalita alone on my room thinking about that situation actually happening? It was like going to medical school for seven years and then after 10 years someone asking ‘Is there a doctor in the house?’
“They had lyric sheets available and were asking if we needed them and I said, ‘You know, I think I’ve got this.’ I think he (Springsteen) was pretty amused with me, and my reaction.”
While they will represent Brooklyn in Liverpool, the band are mostly blow-ins to New York. Finn and guitarist Tad Kubler are Minneapolis raised, and began their musical life in their previous band Lifter Puller. Minneapolis, the Twin Cities and the Mid West remain the primarily lyrical inspirations for Finn.
Teeth Dreams is set in the Mid West and also makes reference to “prairie towns“, those heartland small towns rarely heard of in modern rock.

“The Mid West for people on the east and west coasts is flyover country and that brings a certain amount of underdog status to people from there,” says Finn.
“But, it’s a wide-open space. You can drive 40 miles in the Mid West and not see very much at all, people do that several times a day.”
“So it always seems that you are driving in wide-open spaces with music playing loudly in the car – and that’s a very romantic notion that’s very real.”
“I have been in NYC for 14 years in September, and often meet people from the Mid West that have moved and reinvented themselves. I’ve always felt that was unattractive. I have always wanted to talk about truth: I’m from Minneapolis and have always been proud about embracing that.”
Equally important to the band is reveling in being seen as a bar band; recent reviews of Teeth Dreams has continued the tradition of describing them as ‘blue collar rock’.
“If I ever see blue collar rock or white collar rock, I’m always more likely to buy the blue collar rock,” says Finn.
“I think that rock bands should work hard and get their hands dirty. I’m fine with us being called a bar band.”
If you are in the Garage at 1am on May 2, you’ll see America’s greatest bar band in their ultimate habitat; nearly deafening a small sweaty crowd with tales of unlucky losers.
Further reading on Getintothis:
The Hold Steady: Boys And Girls In America
New York Sound City announces March festivities featuring The Hold Steady
New Soundbites: featuring The Hold Steady’ Stay Positive
Liverpool Sound City 2014: Getintothis presents Jon Hopkins and stellar Merseyside show at Nation
Liverpool Sound City 2014: Fringe events and John Peel World Cup revealed
Liverpool Sound City 2014 add The Kooks to festival bill
Liverpool Sound City 2014: Jagwar Ma, Factory Floor, PINS and more set for May festival
Liverpool Sound City 2014 – a Getintothis festival playlist