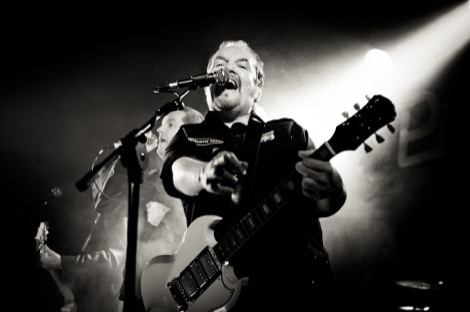 The Mighty Wylie returns to the Zanzibar to give a masterclass in raw yet powerful songcraft, Getintothis’ Ian Salmon salutes this big-hearted Scouse hero.

Pete Wylie‘s Heart As Big As Liverpool has always been anthemic – the gospel stylings, the grandeur and the sentiment all ensured that would always be the case – but in the time since its release at the start of the century it has assumed a spiritual, almost hymnal quality.
That quality was more evident than ever at the centre of a truly magnificent ‘comeback’ show at a packed, fervent Zanzibar on Friday.
For the longest time it appeared that Songs Of Strength And Heartbreak, the album that gave us Heart As Big would serve as a full stop to Wylie’s recording career.
The singer chose to ‘go on strike‘ for the duration of the Capital Of Culture year and never quite came back. There was his sterling work as a prime mover in the Justice Tonight band of course but that was followed by further silence.
This year sees him ‘back, back, back’ as Smash Hits used to say. New material – the long promised Pete Sounds and Slime albums (Beach Boys references if you weren’t aware) finally set to become reality, an acoustic reintroduction here and full electric band gigs to follow later in the year. He is as strong, as vibrant, as sharp, as passionate and cuttingly witty as he has ever been. The poet ruffian incarnate.
Joined by Tom Carroll who took second guitar duties and shared backing vocals with Wylie‘s daughter, Mersey (having already played her own impressive set).
The set’s acoustic nature brilliantly lost none of the power that always lay at the heart of Wah! and served as a strong foundation for Wylie‘s quite definitely undimmed by age vocals.
As striking back catalogues go, Wylie has one of the best of the post punk era; Come Back, Sing All The Saddest Songs, Better Scream, Sinful, a rare outing for both parts of Story Of The Blues with part two still standing as a manifesto for anybody Liverpool born and with a social conscience.
The newer material included his notorious ‘tribute’ to a late Tory Prime Minister – not updated as she “wasn’t worth wasting any more time on” and as raucously received as you would expect in the centre of this city – and We’re All In This Together. A week old, Woody Guthrie-esque in its sing along nature and political leanings, embraced as another classic addition to the canon.
The jewel in the crown though was obviously the song that started this review. Prefaced with his usual reading of Johnny Thunders‘ You Can’t Put Your Arms Around A Memory and dedicated, as it always will be, to the memory of the 96. Honest and heartbreakingly beautiful.
Wylie ended the night with fulsome praise for the audience; for their support, for the distance that many had travelled for this one-off (in every sense of the word) and for the encouragement that he had been shown since he announced this date.
New albums, a memoir to be written, more gigs, a musical! and Wylie‘s thanking us.
No Pete. Thank you.
Further reading on Getintothis:
The Justice Tonight show featuring Mick Jones, Pete Wylie, The Farm: The Picket, Liverpool
Justice Tour: The Farm, Pete Wylie, John Power, Billy Bragg: Mountford Hall, Liverpool
Brian Nash on teaming up with McNabb, Prowse and Wylie ahead of their special Zanzibar gig
The Justice Tonight show featuring Mick Jones, Pete Wylie, The Farm – picture gallery: The Picket, Liverpool