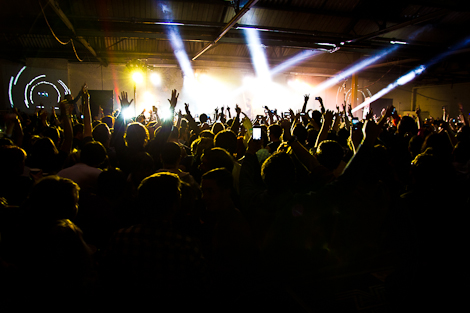 Get those trabs at the ready, because it’s time to start running.
Seasoned Sound City heads will know you’ll need more than a bit of stamina to keep up with this urban monster of a music festival – you need a little bit of know how to stay ahead of the game.
So we’ve prepped a little guide of all the venues for Liverpool Sound City 2014 plus a few highlights to catch there and below is a handy online map of where to find them.
Sound City 2014 venue map. 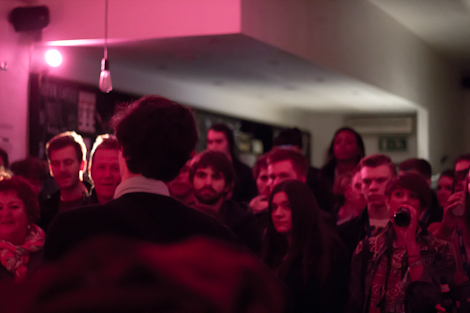 Dan Croll performing in Bold Street Coffee
Bold Street Coffee
Situated in the heart of the city centre, Bold Street Coffee is by day one of the city’s most-loved indie coffee hang outs, but for Sound City is transformed into a pop up boutique for music fans. Previously hosting the likes of Dan Croll and Springtime Anchorage, this year catch sets from The Hummingbirds (Friday), harmony trio Barbieshop (Saturday) and eerie noise heads Ajimal (Saturday).
89 Bold St, Liverpool L1 4HF
Brooklyn Mixer
Located on Seel Street, Brooklyn Mixer prides itself on being a US-style downtown bar with a big emphasis on music. Specialising in hip hop and electro you’ll find the likes of GIT Award 2013 People’s Choice winner Tyler Mensah (Thursday), The Delta Riggs (Friday) and Kid Mac (Saturday).
78 Seel Street, Liverpool.
Duke Street Garage
The Garage (lead image) is one of our favourite venues at Sound City. For much of the year it’s just a soulless car park, but for three days in May it converts into a warehouse style venue that has left its mark on the festival with memorable performances from Bastille and Aluna George.
This year’s festival, The Garage hosts headliners The Kooks on Saturday, Royal Blood, The Hold Steady as well as The Tea Street Band who are no strangers to this particular stage having played a storming set back in 2012.
Wolstenholme Square, Liverpool, L1 4JJ
East Village Arts Club Loftand East Village Arts Club Theatre
A venue within a venue, the EVAC is so spacious it accommodates two different stages as well as a great place to get food and drink – what more could you want? Well how about Circa Waves on Thursday night in the loft? Or if that doesn’t tickle your fancy maybe Gruff Rhys (Thursday) in the Theatre?
90 Seel Street, L1 4BH
Factory
What makes Sound City special is the fact that you listen to live music in the most unlikely of places. Such a place happens to be Factory which, on the outside appears to be an ugly, disused building on Seel Street but will surely make its mark as a venue that may suit the likes of The Bohicas (Thursday) and Moko (Friday).
31 Seel Street , Liverpool, L1 4BE
Heebie Jeebies
One of Liverpool’s most popular nightclubs, Heebie Jeebies will yet again play host to Sound City in 2014.
Whether it’s the idyllic surroundings of the courtyard (great for kicking back and soaking up the Aussie BBQ in previous years) or the the narrow confines of the underground bar, the spacious establishment will play host to Model Aeroplanes (Friday) and Seattle Yacht Club (Saturday) among others.
80-82 Seel Street, Liverpool, L1 4BH 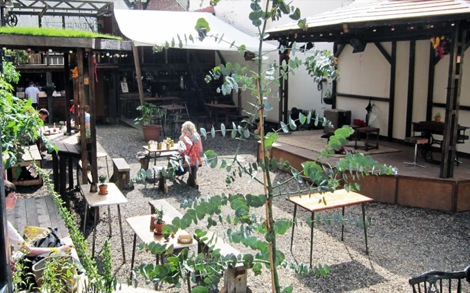 The Kazimier Gardens
Kazimier Gardens
The Garden is a green space like no other in Liverpool. A hybrid space bridging natural and urban environments to form a post biogenic wonderland will surely go down well with those who enter its confines.
Highlights include Natalie McCool (Thursday), Nadine Carina (Friday) and Jonny Sands (Saturday) – and not forgetting the Korean showcase on Saturday afternoon – another of last year’s highlights.
4-5 Wolstenholme Square, Liverpool, L1 4JJ
Korova
An iconic nightclub which became a legendary place to visit in years gone by, Korova has undergone a rebirth and will be a host venue for this year’s festival.
Picks here include Twin Planets (Thursday), Rah Rah (Friday) and Broken Men (Saturday).
52-54 Wood Street,, Liverpool, L1 4AQ
Leaf
Situated on Bold Street, Leaf is an independent tea shop and bar which marries intelligent bohemian surrounds with a spacious second level allowing for more than a bit of revelry.
Home to the first two GIT Award nights and a regular on the Sound City circuit, this year look out for Rosie Lowe (Thursday), Silent Sleep (Friday) and Sankofa (Saturday).
65-67 Bold St, Liverpool, L1 4EZ 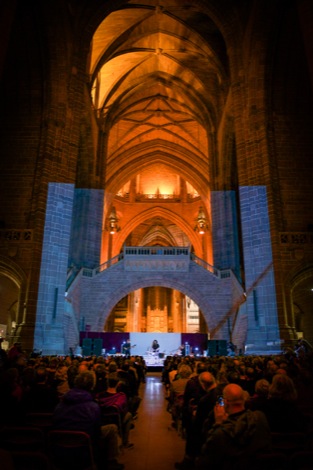 The Anglican Cathedral – home to the headliners
Anglican Cathedral
For the second year running, one of the most iconic buildings that forms part of the Liverpool skyline opens its doors to Sound City. The Anglican Cathedral‘s beautiful interior and exterior will reverberate to the sounds of Clean Bandit (Thursday), San Fermin (Friday) and All We Are (Saturday).
Liverpool Cathedral, St James’ Mount , Liverpool, L1 7AZ
Mello Mello
An independent creative hub that has strived to support Merseyside music, Mello Mello has battled to save its very own existence in recent years and is set to welcome Jansky (Thursday), Lisbon (Friday) and Gnaw (Saturday).
40-42 Slater Street, Liverpool, L1 4BX
Mersey Ferry
So iconic and memorable, Gerry and the Pacemakers paid homage to the Mersey Ferry. This year Sound City pays its own tribute with the Mersey Boat Party which will cross the river with live acts on board including The Splintered Ukes, The Hummingbirds and Gentleman Rogues (Saturday).
Merseyside Ferry Terminal, L3 1DP
Moon Museum
Another new addition to Sound City, Moon Museum is set to offer more than just live music, they will also be providing some great real ale too. Look out for a raft of acts on Friday set to play covers of The Velvet Underground in tribute to Sound City guest speaker John Cale.
Ones to watch here include Veyu (Thursday), Sugarmen (Friday) and The Delta Riggs (Saturday).
3 Parr Street , L1 4JJ
Nation
New to 2014, this iconic nightclub has played host to world-renowned DJ’s throughout the past 20 years such as Carl Cox and Paul Oakenfold.
Also a certain Merseyside music blog has teamed up with Sound City to deliver the Thursday night line up which includes Ninetails and Jon Hopkins.
Wolstenholme Square, Liverpool, L1 4JJ 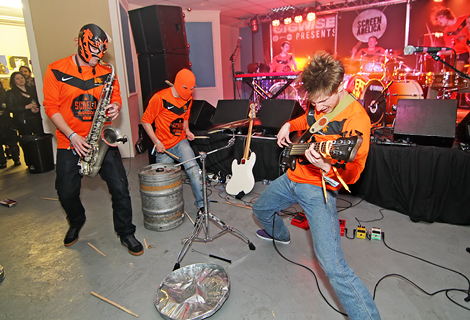 Jazzhands doing the business in Screenadelica
Screenadelica at the Black-E
A pop up gig exhibition which tours festivals all over the world, Screenadelica offers artists a platform for exposure and educating the masses on the medium of screen printing.
Based at the Black-E, if you fancy an alternative way to enjoy music then check out Cleft (Thursday), Sunwolf (Friday) and Marmozets (Saturday). And don’t miss the mania of in-house Screenadelica loons Jazzhands.
1 Great George St, Liverpool, L1 5EW
Sound Food and Drink
In recent times, Sound has played host to some wild music sessions courtesy of the lads at Boss Mag.
But for three days in May, the Duke Street venue prides itself on being a glorified sit-off and it’s here you can enjoy Gentleman Rogues (Thursday), Manfel (Friday) and The John Steel Singers (Saturday).
52 Duke St, Liverpool, Merseyside L1 5AA,
Studio 2
Sitting at the top end of Parr Street, Studio 2 is a unique nightclub that is capable of putting on a great night of live music in a comfortable and relaxed setting.
However what Studio 2 is widely renowned for is being home to a recording studio that has hosted the likes of Coldplay, The Smiths and even Moby. Ones to watch here include Lucille Crew (Thursday), Money For Rope (Friday) and Dominic Dunn (Saturday).
33-45 Parr St Liverpool L1 4JN.
Tavern on the Green
A cosy bar sitting on Chavasse Park Green in Liverpool ONE, Tavern on the Green should provide another intimate setting for Sound City. Specialising in cocktails and ales, catch sets from Benn Helm and She Drew the Gun (both Saturday).
8/9 Kenyon Steps, Liverpool, L1 3DF 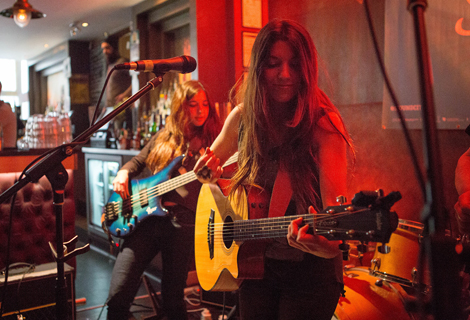 Alejandra Burgos from Sound City in the Attic
The Attic
Like its downstairs neighbour Studio 2, The Attic offers a relaxed and comfortable setting to enjoy music in for those who may want a breather from the mosh pits and head banging sounds elsewhere.
Picks here include Red Room Therapy (Thursday), Soldier On (Friday) and Esco Williams (Saturday).
33-45 Parr Street, Liverpool, L14JN
The Bluecoat Gardens
Historically famed for being at the epicentre of Liverpool’s arts and cultural scene, the Bluecoat Gardens plays host to Sound City on Saturday.
With acts such as Dominic Dunn, The Hummingbirds and Silent Sleep popping up to play an afternoon set, there couldn’t be a better place to enjoy some quality live music.
School Lane, Liverpool, L1 3BX
The Brink
The Brink is no ordinary bar. In fact it stands alone in being the only venue of its kind in the fact that it doesn’t serve any alcohol.
However music lovers who love a drink need not be put off with the likes of Bolshy (Thursday), Glory Glory and Etches (Saturday).
21 Parr St Liverpool, UK L1 4JN.
The Cavern Club
Of all the Sound City venues, this needs little introduction. Catch Etches (Thursday), and The City Walls (Saturday).
10 Mathew St, Liverpool, L2 6RE
The Kazimier
Home to the weird, yet wonderful The Kazimier is a prominent figure of the Liverpool music scene and will play its part again in the year’s festival.
Highlights include Amber Run (Thursday), Drenge (Friday) and Glass Animals (Saturday).
Wolstenholme Sq, Liverpool, L14JJ
The Shipping Forecast
Having played host to Sound City in 2012, The Shipping Forecast makes a welcome return this year.
With its upstairs providing a cool place to hang out, downstairs is arguably one of the best places in Liverpool to catch a gig. Ones to watch here are The Wild Eyes (Thursday), Hibou (Friday) and Moats (Saturday).
15 Slater St, Liverpool, L1 4BW
Wolstenholme Creative Space
For the first time this year, Sound City hosts its own record fair. There will be the opportunity to purchase rare items of vinyl right in the heart of the festival for those who fancy slipping out of the maelstrom of music mayhem to wile away the hours amongst mountains of vinyl. To put it simply, it’s a massive swap shop for music lovers.
Wolstenholme Creative Space, L1 4JJ
The Zanzibar
The bastion of grassroots Merseyside music, The Zanzibar, located on Seel Street, played host to memorable sets from The 1975 and Theme Park last year. 2014 has a lot to live up to but with the likes of The Scenes and Courtney Barnett (Thursday), The Sunshine Underground (Friday) and Scouts, there’s sure to be more memorable performances here.
43 Seel St, Liverpool, L1 4AZ 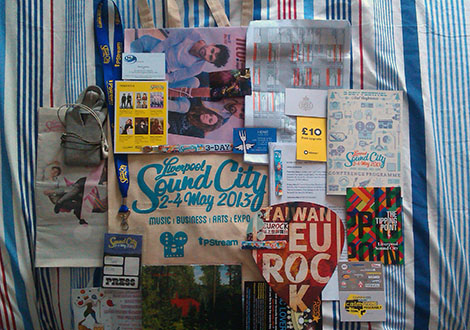