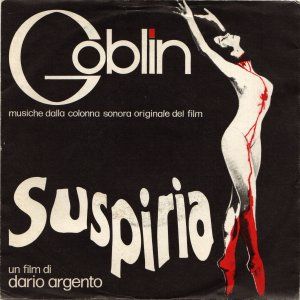 Ahead of a live performance of the Suspiria score at Manchester’s The Dancehouse, Getintothis’ Adam Scovell tracks the rise of Goblin in horror cinema.

The sixties and seventies saw a rash of collaborations between directors and bands. The great divides between artistic media shifted, allowing collaboration to be a natural element of popular culture. Pink Floyd’s two collaborations with French director, Barbet Schroeder (More, 1969 and The Valley, 1972), Mick Jagger collaborating simultaneously with Donald Cammell, Nicolas Roeg (Performance, 1970), and Kenneth Anger (Invocation Of My Demon Brother, 1969), and various members of Genesis with Jerzy Skolimowski (The Shout, 1978), being just a few of many examples. One relationship in particular, however, seems to stand out, if only because it defined a whole wave of genre cinema. That relationship is between the prog-cult band Goblin and the horror cinema of Dario Argento.

Goblin are a typical band of the era in one sense, ironically in that their music is completely atypical. Clearly influenced by the likes of ELP and King Crimson, Goblin were formed by keyboardist and key creative figure, Claudio Simonetti, initially naming the group Oliver before the name was changed to Cherry Five by the record label. When film score work eventually did come about, the band worked under the name Goblin (as well as “The Goblins“, and Il Reale Impero Brittanico), initially to avoid a clash between their recent LP and their first soundtrack LP which were being released simultaneously. The name stuck, as did their film music which they (and Simonetti) have now become known for.

Goblin’s first scoring opportunity was given to them by Argento in 1975. Argento had been relatively new to directing, making (and defining) Giallo horror features since 1970 at the rate of roughly one per year, starting with the excellent The Bird With The Crystal Plumage (L’uccello dalle piume di cristallo, 1970). All of Argento’s films up to that point had been scored by the eponymous Ennio Morricone so the shift in direction is clear from this creative decision alone. Deep Red (Profondo rosso, 1975) was Goblin’s first attempt at a film score and its frank innovations are astounding especially given the back-story of its composition and recording. The opportunity to dive in at the deep end came quite accidently when the film’s desired composer, jazz maestro Giorgio Gaslini, fell out with Argento.

Argento gave Goblin the task to write and record a musical score in little more than a day but the band succeeded, creating a richly original horror soundtrack for what was a ground-breaking piece of horror cinema. The music has more than its fair share of similarities with Mike Oldfield’s Tubular Bells which had been used two years before to soundtrack William Friedkin’s The Exorcist (1973), yet other elements found their way into the music as well. A strange mixture of prog instrumentation, Bitches Brew weirdness, and Gothic church organs makes it a perfect evocation of a film that mixes the stark modernism of Italian Giallo with lashings of Gothic paraphernalia.

The success of Goblin’s music for the film, both creatively and financially with the soundtrack LP far outstripping their Cherry Five LP, lead to a long collaborative relationship with both Argento and the horror circles that surrounded him. For Argento’s next (and best) film, Goblin created what would be their most famous and recognisable soundtrack in Suspiria (1977); an ultra-stylised, ultra-violent nightmare about a dance school that’s harbouring a coven of witches. Its opening musical motif surmises the film’s intentions, building to a ritualistic cacophony of demented voices, sabbat percussion, and folkloric guitar-lines. Even the use of twinkly vibraphone-like instruments hints at something more otherworldly, opening with a naivety that is all but crushed by the film’s dramatic and exhilarating conclusion.

By the late seventies, Argento carried some weight in horror cinema with a catalogue of quality films under his belt. This weight meant he could help produce projects that he thought were worthwhile, one of these being George A. Romero’s genre-defining zombie film, Dawn of the Dead (1978). Set in the newly built zone of a shopping mall, Romero’s satire on consumerism and the oncoming neo-liberal assault of the 1980s needed something as equally as plastic and weird to soundtrack it. Goblin again stepped into the breach, recording an overly electronic score filled with ARP’s and MOOG’s. It feels far away from the folk-ish intentions of Suspiria though is a soundtrack that works well in hindsight of what was to come in the next decade, both sociologically and in horror cinema.

After their work on Dawn of the Dead, the band’s members largely went into different projects, occasionally reuniting for various films, often through Argento or some other related horror project (films such as The Church (1989) and Demons (1985)). For Argento’s video nasty, Tenebre (1982), several members of Goblin came back to provide its musical accompaniment in a soundtrack that is probably most recognisable as being heavily sampled by JUSTICE in Phantom Parts 1 and 2. They would unite finally in some recognisable guise for Argento’s last great film, Phenomena (1985), before it was left to Simonetti alone to provide music for Argento’s films (including Opera (1989), The Card Player (2004) and numerous others) of spiralling cinematic quality. The composer still works with Argento to this day though it’s doubtful whether the pair will produce such sparkling creativity as they did in their early collaborations; where musician and director found a perfect, horrific partnership.

Goblin are performing a live score to Suspiria along with a screening of Argento’s cut of Dawn of the Dead at The Dancehouse in Manchester as part of Grimmfest on the 3rd of October.