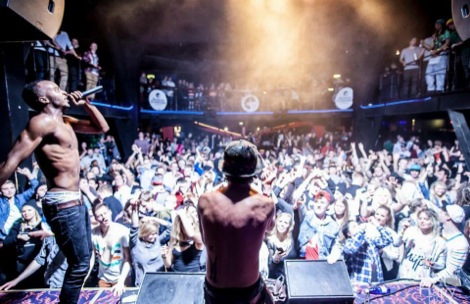 With dents made in hip-hop scenes both sides of the Atlantic, Mad Brains is back with his hazy new EP Myth, Getintothis’ Patrick Clarke laps up the fug.

With a GIT Award nod coming his way earlier this year, Mad Brains is hitting back in instinctive style with his latest outing Solo, cut from his latest Myth EP, a collaborative effort with producer Srabi Machine.

Filmed against a heavily stylised Dartmoor, Devon backdrop awash in foggy greys and tattered-rich reds it draws a fuzzy aesthetic of dream-like desolation to the visual fore, backed by the US-born, Liverpool-bred rapper’s trademark blend of off-kilter alt hip-hop.

A minimalist beat of drifting electronica drives the track forward, peppering itself with wraithlike chimes and opaque vocal samples as the rapper unravels another hypnotic helping of the trademark maze-like flow that turned so many heads last year.

The rest of the EP is available to stream on Soundcloud now via Radio Juicy, with $immy, J-Flowz and Kojey Radical securing guest spots across the seven tracks.

It’s his first full release since the 2013 Zades mixtape that saw the MC’s initial rush of acclaim, a featuring role on Little Grace‘s Take This surfacing in July.