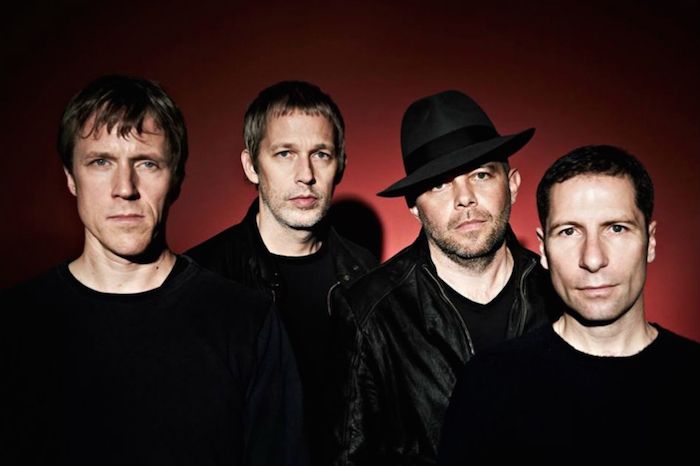 As the legendary shoegazers Ride reform for a sold out tour in 2015, Getintothis’ Gareth Roberts relives their heyday.

They’re back. Twenty years after Mark Gardener and Andy Bell last cranked up their amps and stamped on effects pedals to leave feedback-fused eardrums ringing, Oxford shoegazing pioneers Ride will return to the stage in 2015.

In very recent history, looking in from the outside at least, the likelihood of that happening seemed on a par with Lord Lucan appearing on the back of Shergar to announce an open-air reenactment of Bernard Manning’s best jokes. In the middle of Toxteth.

Guitar music – particularly the amps cranked up, wall-of-sound guitar music favoured by Ride and the like – looked like it was gone for good, forever to exist on vinyl, sleeping inside flowery sleeves and wave-covered gatefolds but never again to grace the big stages or spark a mouse-clicking frenzy in the digital age.

Just two years ago, The Guardian’s music blog ran a piece asking: “Is guitar music on its way out?” 6Music posed the same question and the matter sparked some serious debate. Three years previous the BBC ran a piece on its website titled 2009: ‘The year British indie guitar music died’ after just two guitar bands from these shores featured in the top 20 selling albums that year.

With that as the unforgiving backdrop, and Andy Bell still being criminally under-employed as a bass player by first Oasis and then Beady Eye (FFS), it seemed a Ride reunion was something that would only ever be a drunken discussion on Twitter or an optimistic thread in a shoegazing forum.

Once upon a time, I would have been the first to say that perhaps it was best that way. Leave us with our memories. That was our time. Reunions are never pretty, never cool, right? Music is for the young and carefree. The rest of us should curl up with our Horlicks, spin vinyl and wait for the Grim Reaper to come knocking.

That seemed to be the accepted view for a long time, especially in the music press. But The Stone Roses – against all the odds — proved you CAN rediscover the magic. It can work. OK they burned brightly and faded away again, and perhaps that was the dying of the light. But it was worth it. It changed the landscape. Fuck whether someone somewhere thinks it’s cool or not. Fuck whether it matches the latest scene, trend or fashion.

Tear up the rules that were never written down in the first place: If a band is happy to put the work in to reach the heights of yesteryear – particularly an important one; a loved one – the fans will happily watch. We all walk away with a smile on our face, where’s the harm? A half-arsed money-spinning comeback packed full of mistakes and half smiles is one thing; a super-tight walk down memory lane ending with clenched fist salutes and endless encores is another.

But still there wasn’t that wider appetite for it. And while that shouldn’t matter, it does. A half-full venue or a disinterested festival crowd does nobody any favours. And if there’s even a hint that could happen all parties will understandably shy away with reputations on the line.

But then things started to change. Rumours of shoegazing’s demise had been greatly exaggerated. An underground revival began. Floppy-fringed, loud-guitared bands seemingly poured out of Australia. On these shores too, guitars, pedals, noise – it all slowly became fashionable again among the new blood. Meanwhile, other, older, reverb returns fell into open arms: My Bloody Valentine’s album, Slowdive’s comeback, Jesus and Mary Chain’s gigs. There was an appetite for distortion.

A reunion shouldn’t really need an accepting wider backdrop, but it helps. Ride’s fanbase has always existed, continuing to spin their four albums and early EPs. Time seems to have been kind to their work. There are some clear cracks at a mainstream single among the discography – Twisterella the obvious one to my mind – but Ride were never as commercially motivated as some. That just added to the appeal. And while they don’t seem overly enamoured with their later work, a Byrds-inspired album in Carnival of Light did us just fine thank you very much while the prospect of Black Nite Crash performed live? Make it happen.

All that said, it must be nice to think people the right side of 30 might take an interest, too. That a new generation might buy Nowhere, or Going Blank Again or even search out the early classics: Play, Taste, Fall, Kaleidoscope, Today Forever. It’s all about the timing and the motivation. There’s a legacy at stake. Get a reunion wrong and you tarnish what you did before. Get it right, and perhaps there’s a last chance at the album that never was. One more LP. Just one more…

Second guessing the process, you can imagine Bell, Gardener et al thinking it through. The hardcore remained, the question about reforming never went away. Meanwhile, the sounds they so magnificently unleashed into the music world were seeping back into the mainstream.

And then Beady Eye split.

It was now or never, right?

We still expected never. Too many ‘maybe one day’ answers. Too much Oasis for Andy Bell. It felt liked they’d moved on. We’d convinced ourselves Mark Gardener’s stripped-down versions of a few Ride classics at a solo show in Liverpool was the last time we’d see those songs performed live.

When the latest round of hints appeared on Twitter it felt like Groundhog Day. Ride reunion news had become the Caught Offside transfer exclusive of the music world. Easy clickbait. Too many cut and paste bullshit stories, too many times caught on the hook without a chomp at the maggot to show for it in the past. This time I was swimming past.

And think about it. Logically. Maybe Andy Bell would be glad of the break. He doesn’t need the money. Mark’s carved a niche as a solo artist and producer, Laurence Colbert is drumming with Gaz Coombes and Steve Queralt had moved on from music. Why would they do it?

And then it happened. Nine dates, including two festivals. Interviews on 6Music. Websites falling over because of the traffic. New band pictures. An avalanche of tweets. Announcements. Manchester Albert Hall sold out in four minutes. Tickets for the whole tour snapped up in half an hour. If it’s a gamble it’s already well on its way to paying off. People who don’t get Ride don’t get it. People who do most definitely do. 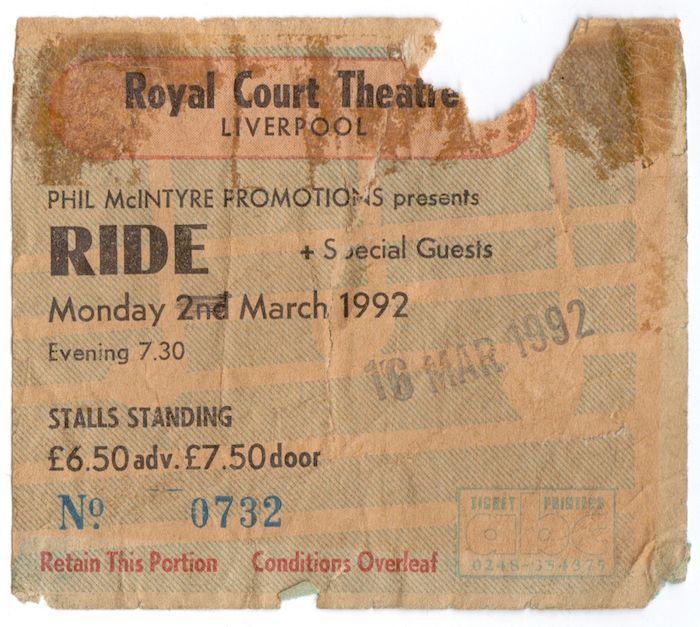 Ride at the Royal Court

My first gig was Ride at the Royal Court in 1992. I was still at school and it was a real venture into the unknown. Damp, dingy and mysterious, and that was just the bar.

A bare-footed Richard Ashcroft led Verve on stage (they were just ‘Verve’ then, the ‘The’ came later). He was weird, they were brilliant; Ashcroft’s pouting lips and swirling arms backed up a crescendo of sound that filled the old theatre and provided the perfect starter for the main course.

The illuminated capital letters spelling out ‘RIDE’ on the bass drum cut through the dry ice and the band took to the stage shrouded in darkness. We’re going back 22 years, and memory recall isn’t my strong point. But I know for a fact that is one of, if not the, loudest gig I’ve been to. The temporary tinnitus was well worth it.

Back then, ‘shoegazing’ was a derogatory term. A phrase fired at bands that didn’t put on a show, didn’t engage, just looked at their footwear while chopping away the guitar. But who needs prancing around and ‘banter’ anyway when you’ve got tunes like these? Mark Gardener wore red jeans and pulled it off. He grew his hair and looked the business. I tried both and did neither. Maybe I just needed the Rickenbacker. Hey-ho, it’s Christmas soon.

People more technically minded music-wise can describe Ride’s sound and songwriting much better than I will ever be able to. But what’s important to me is that I remember looking around in that gig and seeing smiling faces, fans singing along and the incredulous looks of my school mates. Ride were a great live band and I have every faith they will be again. I know I had the same expression on my face post-gig. For days.

My friend Lee still brings up my picky complaint to this day: Vapour Trail – one of my favourites – was lacking the cello and violin live. It was my first gig, forgive me. But you know, if you’re taking requests for May, lads, bring the orchestra.

I can’t wait to smile at Ride’s magnificence once again: “Take me for a ride away from the places we have known / If I stay around I’ll just remember I’m alone.”