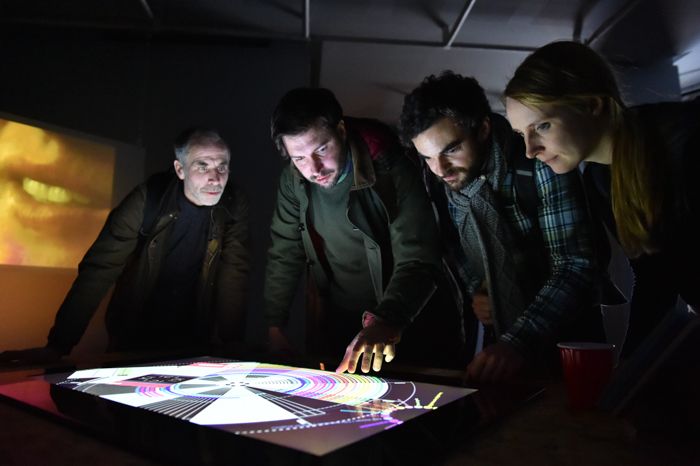 FACT are currently holding a celebration of the marriage between typography and design so we sent Getintothis’ Esme Lowe to separate the serif from the script.

Presenting over 240 examples of pieces of film that make use of type in imaginative and unconventional ways, Type Motion at FACT is a design geek’s wet dream.

The exhibition aims to celebrate the creative possibilities of using text beyond print and explores how giving life to writing within moving image can completely transform our relationship with words.

Spread out across four spaces, this free exhibition marks major cultural shifts by charting the journey of the moving image as we know it; from the birth of cinema to brand advertisements on television, right up to the production of music videos in today’s digital age.

Whilst including well-known cinematic works as examples of how film combines writing and moving image historically, such as Hitchcock’s iconic Psycho, and George Lucas’ Star Wars franchise, many of the lesser known works displayed effectively demonstrate the experimental changes in the underground art scene throughout the past century.

The one thing that struck us most about Type Motion as we wandered through FACT’s gallery spaces was how immersive, inclusive and accessible the exhibition is.

This was probably more notable because of the way it contrasts with the recent Sharon Lockhart exhibition which was shown here as part of Liverpool Biennial – Lockhart demanded the space be left minimal and the exhibition itself consisted of one large-scale documentary film of a group of children playing within the grey urban wasteland of Lodz, Poland.

The video installation felt more or less without context, other than the scant documentation and photographs in Gallery 2 which accompanied it. Lockhart’s work felt bleak and somewhat detached from its subject, whereas Type Motion is full of humour and interactivity.

In Gallery 1, the space has been used to effectively create a mirrored infinity where visitors find themselves immersed in an endless body of moving image works that display the complex relationship between text and today’s urban environment. In one animation work, we see a cityscape that is reminiscent of a futuristic, dystopian Manhattan, flooded with advertisements, logos and digital façades.

In this work, all objects are presented by bodies of text, for example the archetypal New York taxi careering through sets of traffic lights is simply the word ‘taxi’ in bold yellow font. All of the archived material invites visitors to consider the way in which we are constantly subjected to a bombardment of text and advertising in public spaces. 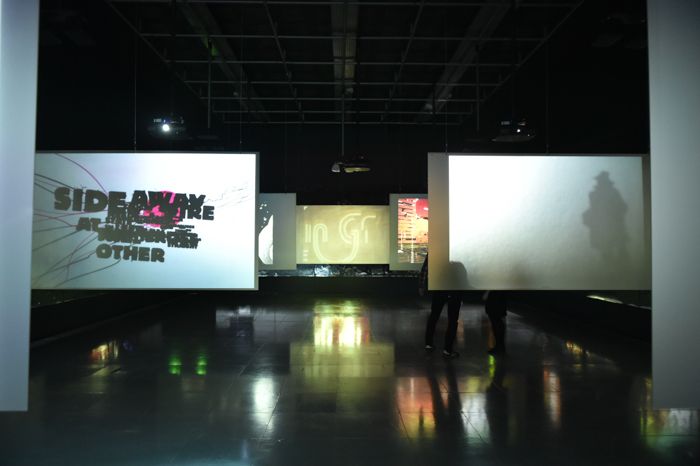 Gallery 2 is an altogether different affair, the space operating as more of a tech-lab rather than an exhibition. Here, members of the public are encouraged to delve into the comprehensive archive of moving image material through a series of ‘interaction stations’ developed by German media lab xm:lab.

A large multi-touch surface installation allows users to learn more about the films from the Type Motion archive and invites you to curate your own playlist of work which you can then play back on the two projection screens on either side of the station.

On the other side of the gallery is a gesture based-controller which allows you to navigate your way through a film by hovering the palm of your hand over a sensor, flying through an urban environment in search of a flashing billboard displaying the word ‘Kino’ (a German word which translates as ‘Cinema’ in English). When you finally reach your target, you are shown another film clip that itself utilises text to convey its message.

Gallery 2 also hosts an intimate cinema space where you can interact with the archive in the more classic form of a programme of curated screenings that run throughout the day.

To complement the main exhibition, FACT has also produced a rich programme of public activity most of which will take place in the Development Lab situated in the building’s atrium.

In this inclusive environment, members of the public will be invited to experience some of the technology and techniques involved in creating the work included in Type Motion by taking part in workshops and drop in sessions hosted by an array of artists and experts which will include projection mapping, coding, design and data interaction. The space will also act as the temporary home for FACT’s ‘tweeting typewriter‘ (tech specialist Philip McGaw’s handiwork) and a brand new app by artist Suse Miessner which can be used to create your own Liverpool alphabet.

Whether or not you’re into typography and graphic design, this exhibition is a creative and inspired way to learn more about how text and film interrelate and a great place to begin to think about how we can continue to work innovatively with the written word as we expand our use of creative technology.