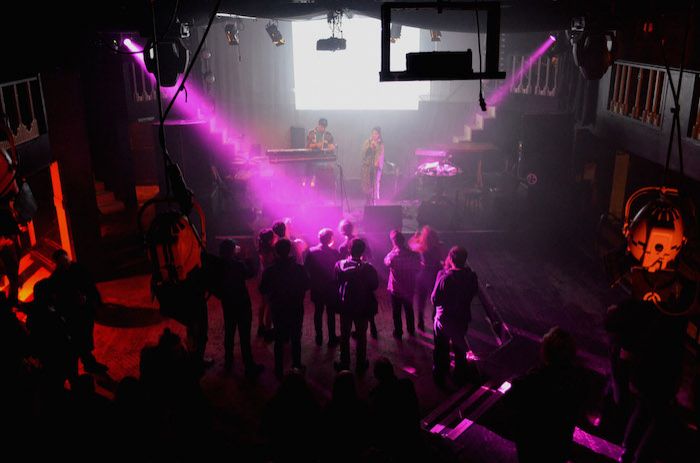 As a collaboration of sound and vision reaches its climax at the Kazimier,  Getintothis’ Adam Scovell takes in a feast for the eyes and ears.

With the overlapping exploration of the dimensions of sound, space and vision, Spaces has been a successful collaborative tour of experimentation between the record label, Slip Discs, and the audio-visual programmers, Video Jam. Ending this tour in The Kazimier, the collective of interdisciplinary melding found much to consider in the walls of our, now threatened, hive of nooks and crannies; mixing the latest of noise and sound art with a collection of especially commissioned collaborations between visual and aural artists. While Spaces does not have a strict theme per se, the idea of allowing light and vibrations to interplay with a number of venues and their architecture worked staggeringly well, especially in the dark labyrinths and zigzag haze of The Kazimier’s walls.

The film showed visuals of life in the more dilapidated vistas of modern Britain but brought out a strange, Edward Hopper beauty from its concrete and neon. The medium itself also projected the footage into an aesthetic past which gave the work a sense of optimism rather than grim kitchen- sink reality. SPAAK’s accompaniment also suggested a form of whimsy about the daily routine of an outmoded norm, merging a strangely melodic range of bleeps with more abstract sounding fuzz.

In between the audio-visual pieces were a range of sound and music works by the likes of Wanda Group and Bernard and Edith. The individual works were complex and ranged a great deal in style though the presence of purely sound work in between audio-visual work left some audience members unclear as to how to react; the works needed close attention to detail and expression which was perhaps undermined by the feel that the proceedings were more of an interval in between the main commissioned acts. In spite of this minor reception flaw, the works were incredible.

Bernard and Edith in particular escaped the feel of a passing interval completely with their strange mixture of heavy Kraftwerk-ism, Radiophonic Workshop soundscapes and the ethereal presence of Edith’s vocals as she seemed possessed by some sought of sensuous demon, animating her limbs and voice into an intangible liquid.

The enjoyable fetishism of celluloid continued in Filters by filmmaker, James Snazell, and fragmentising musician, MFAAH. Filters, in both sound and vision, sought to create something out of the decomposition of analogue, taking previously used 16mm film and breaking it down to such a slow frame rate that even the film sprocket was perceivable. The original images became warped into a haze of blurred colour and shapes, heightened further by the increasing distortion of MFAAH’s sound crackles. It presented the idea of creating space through destruction but also through repetition as if the Zen layering created a cathartic response to the artistic degradation and material calamity.

Looking at the physical nature of the medium took precedent in the final commission of the evening; a mixture of film, sound and performance in Mary Stark and Chaines’ Film As Fabric, Lace And Thread. Beginning with the projection of Len Lye-esque visuals through an actual 16mm projector, the piece felt like a beautiful, alchemic ritual that began with the finished product before explicitly showing the overt physical nature of its double presence in reality. The performance aspect resulted in the shadowy ritual of hanging the celluloid out after it had been rewound of course, while Chaines sampled the artist discussing what it was about the medium that made it so attractive. Just admiring the devices on show, meant it needed little justification.

The night ended with an especially curated show by Deep Hedonia, presenting AKASA’s Selective Attention before the night descended into an atypically glitchy end-of-tour after party. Within Spaces, Video Jam and Slip Discs proved the potential of a traditional format (touring and venue spaces) being realigned with more a progressive and avant-garde mentality. The fact that such works felt so accessible and free-flowing (no doubt helped by the carefully picked spaces themselves) is a huge achievement and one that shows yet another positive shift into the more forward thinking of audio-visual shows.

The works crackled their way over the audience but they suggested something more. Such embracement of imperfections, from distortion to scratches on celluloid, are not only aspects that are still endlessly interesting to look at, but things that remind of the vital imperfections of the humanity that made them interesting in the first place; a forgotten norm in an age where film can be shot on phones and other tawdry devices.