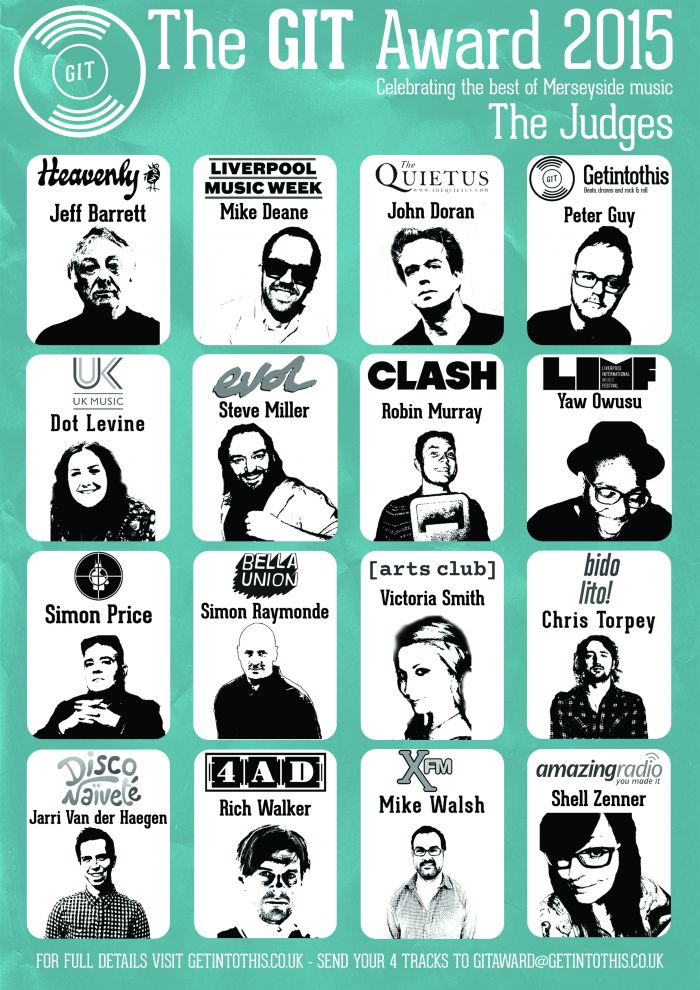 For the first time in its four year history, The GIT (Getintothis) Award panel features founders of three globally-renowned labels, a member of the UK’s key industry body plus its first international representative from an overseas blogger and talent scout.

Joining the judging panel for the 2015 prize is ex-Cocteau Twins member Simon Raymonde – founding owner of Bella Union records who has signed acts such as Flaming Lips, Fleet Foxes and The Walkmen.

Rich Walker, General Manager of 4AD label, home to critically-acclaimed Bon Iver, Daughter, Grimes and The National will also sit on the panel and joining him is Jeff Barrett, founder of Heavenly Recordings which celebrates its 25th birthday in 2015.

Also new to the panel are Victoria Smith, manager of The Arts Club, one of Liverpool’s leading inner city venues and Dot Levine, head of campaigns and communications at UK Music – the umbrella organisation which represents the collective interests of the UK’s commercial music industry.

Returning for the 2015 panel are Mike Deane, the founder and director of Liverpool Music Week, John Doran, editor of acclaimed pop culture webzine The Quietus, Mike Walsh, deputy programme director and head of music at Xfm and Simon Price, music journalist with decades’ worth of experience writing for a host of national titles.

Simon Raymonde, said: “I’ve been spending most weekends this past year on trains up from my coastal home town of Brighton to all the corners of our fair isle, and beyond, and it is no exaggeration to say, without wishing to put the curse of ‘scene’ upon it, the most consistently exciting bands right now ARE from Liverpool. That is an irrefutable fact.

“I present a weekly radio show of new and unsigned music from all over the world, and you only need to listen to a cross-section of the shows from the last year, to hear that my claims are wholly justified! It is therefore an honour to be involved this year with Getintothis’ GIT Award.

“Forest Swords were worthy winners last year, and with such a wonderful array of talent again on show this year, I have no doubt, the judges will all pick an artist to make you all proud.”

Chris Torpey added: “This fourth cycle of the GIT Award represents an exciting time for Merseyside music, which should see another wave of brilliant new artists come to the fore. I’m really looking forward to getting to grips with what this year’s Award throws up, and showing to the world how deep our pool of talent really is.”

The fourth edition of Liverpool’s new music prize The GIT Award 2015 returns with a special showcase ceremony at The Kazimier on Saturday 4 April 2015.

The GIT Award is the first, and only, regional award of its kind championing new emerging talent within Merseyside’s eclectic arts and music community, pushing innovative musicians right across the world, and the nominations process to find 12 shortlisted artists is already open.

A special Inspiration Award, recognising significant outstanding achievement in Merseyside’s music industry will also be presented. Past Inspiration Awards have been won by Africa Oye (2014), the Hillsborough Justice Collective (2013) and the team behind Liverpool’s Kazimier club (2012).

A ‘One To Watch’ prize will also be on offer, following in the footsteps of last year’s winner – and newly-signed to XL Recordings, Lapsley.

Liverpool has long been considered a hotbed of musical talent and The GIT Award is committed to putting the city’s most innovative new bands and artists on the national and international stage.