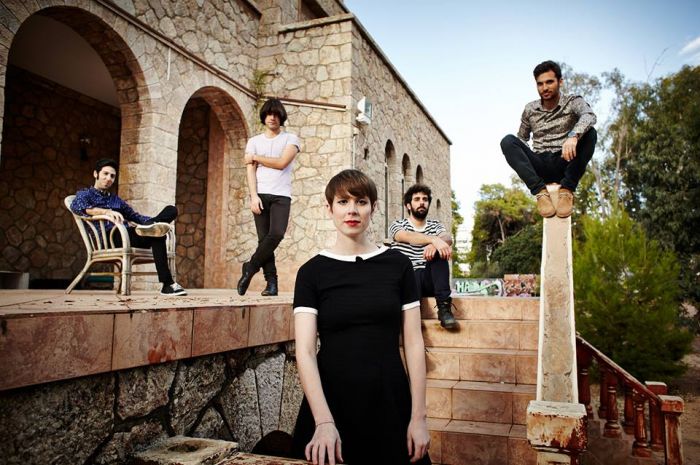 Psychedelia has been one of the zeitgest’s more generous benefactors this year, and with a host of alternative upstarts long-since saturating the charms it’s beginning to require something pretty special from the leaders of the pack to keep momentum.

Just as well, then, that Greek fivesome My Drunken Haze, are an absurdly good band, their new self-titled debut staking a claim for this writer’s own album of the year. King Elephant‘s production duties are quite genuinely near-perfect on the album, giving the most infectious of riffs, the slickest of fills and the most teasing of electronic flavouring their own room to breath, a kaleidoscopic backing for the magnificence of Matina Sous Peau‘s determined yet graceful vocal.

Drawing on the vintage melodies of 60’s invasion pop on Yellow Balloon, the louche cool of close-contemporaries Allah Lahs on the stylish Carol Wait and the art of the shoegaze slowburner on Pleasing Illusions, the record essentially distills some of psych-pop’s finest inflections into a single piece of mastery. Lead single Girl Who Looks Like A Boy is an arguable zenith, a sauntering, groovy affirmation of one of the year’s most delectable talents.

Simultaneously channeling the likes of Mazzy Star, Spiritualized and Mercury Rev at their most mellow, the tracks drift at unwinding tempo yet have the understated opulence to maintain a stout momentum; though not-quite groundbreaking they undoubtedly fill a distinct aesthetic in a style nothing short of entrancing every time.

London’s Dracula Legs, are his opposite every way, their smoggy new 7″ Sand to the Beach an opaque, ruthless cut of pitch-black gothic punk. The ferocious double A-side Heartburn Destination/Cold Licks appeared earlier in the year, but in the intervening summer the game’s quite clearly been raised, the new outing a more professional and well-craftedlisten.

The single itself is very good, particularly in its rich, low sneer of a vocal and scratchily rocketing hooks, yet it’s the B-side Death of Agethat lends that little bit more character to raise a grubbier head.

A Tarantino-meets-Cramps rockabilly descent opens with uncompromising swagger, launching quickly into a more viscous, mournfully savage post-punk chorus. Their talents are perhaps still yet to get a more individually rounded airing- there’s still a sense of character yet-untapped – but for now they’ve quite the listen on their hands.

Dracula Legs’ new single is as yet unavailable on Soundcloud – April’s Heartburn Destination take its place in our playlist for now, but you can stream it on Bandcamp here