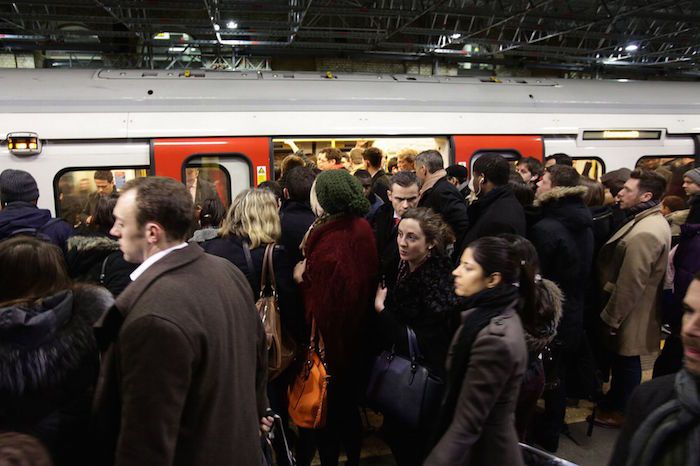 Another quiet commute in the smoke

As the government warns us against the effects of immigration, Getintothis’ Jono Podmore argues how Britain is not just reliant on cultural diversity – but is shaped because of it.

Next time you’re in London, I’d like to recommend a new tourist experience that will give you an insight into contemporary London in a way no museum, restaurant or elevated view over the city can.

Take a train into Victoria station sometime between 7.30am and 8.30am and then transfer to the tube and take a journey via the West End. It doesn’t matter where you’re headed, it’s the journey that counts.

We’ve all watched aghast at footage of rush hour in Tokyo and Beijing with the white-gloved platform attendants “helping” commuters onto trains with a force unthinkable in the West. London isn’t far behind. The volume of people is overwhelming, but more impressive, unlike Tokyo and Beijing, is the volume of peoples. In one journey you will encounter – I promise you – representatives of all the world’s dominant cultural and racial groups: African, Asian, South American, European, and a fascinating plethora of sub-groups and mixtures. You’ll hear the languages of the world too, muttered under frustrated breath, bellowed into bluetooth headsets, pleasantly chatted to overcome the insufferable discomfort of the journey.

This is the living hell that right-wing politicians, particularly the current Conservative government and its vicious counterpart UKIP, are warning us against. This is the nightmare of a nation under siege that the government, including the Lib Dems of course, are attempting to legislate against. This is how swamped the homelands of the nation will be if Britain remains a member of the EU and continues to suffer under human rights legislation and funding enforced from Brussels.

Most people travel in silence, not necessarily glumly, but clearly resigned to their daily trials. Conserving their strength. People under pressure – and this is where the real tourist attraction lies. Whilst under these almost unbearable frustrations and cramped conditions, how do these diverse British people behave? Road rage? Tension boiling over into fisticuffs? Lining up against each other in racial and cultural groups?

The atmosphere is calm. A constant consensus of co-operation is what makes everyone’s journey function. People leave space for each other, miss a train to make way for someone with luggage – there’ll be another one along in a minute. This enormous mass, pushing to the edge of the platform almost like a fairground game of Penny Falls, desperate to get on a train, still waits, when the doors open, to let passengers off the train before getting on themselves. There is a sense of personal self-control for the sake of mutual needs you may not encounter every day.

Isn’t this supposed to be the nightmare? Isn’t this what we’re being warned about, what we need to resist to save our nation from a tidal wave of criminals poised to rinse Britain for the last drop of our collected wealth?

I’m white British and my daughter has been at state schools in South East London since she was four. Now 11 and at secondary school she, as a white child speaking primarily English at home, has consistently been in the minority in her class at school. There is no majority – the kids are from all manner of ethnic and cultural backrounds, the only majority being perhaps brown eyed. So what has been the impact on her education? Her primary school was in the national top ten in last year’s OFSTED reports with SATS  results well above the national average. Personally she reacts with confusion, horror and disgust (in that order) if she encounters racism or cultural injustice – the complex and fascinating worlds of her colleagues is what she defends, she feels no need to fight her besieged cultural corner – she feels as protected as everyone else.

Why is my daily experience so radically different to what you would expect reading the screeching headlines of the Daily Express, the Daily Mail or listening to the rhetoric of Conservative politicians?

The importance here is that it is not only my experience – it’s the experience of anyone living in an ethnically and culturally diverse society. At the last council elections in London, UKIP failed miserably securing only 12 seats out of 1,803. This was put down to the “cultured elite” of London – cultured and educated people are clearly considered a threat. During the campaigning for the Scottish independence vote earlier this year, fingers were regularly pointed at London as being an isolated seat of power, home of a hierarchical elite bent on draining poor wee Scotland of its resources. The reality is that if Scotland had been independent at the last election it would have a Lib Dem government – the people who put the Tories in power, while an independent London would be run by the Labour party. Pro-european, pro-diversity, multi-cultural Labour.

How can the “victims”, swamped and besieged as we are consistently not only support this indignity but actually welcome it?

Easy – we experience it every day and, not only do we witness how utterly benign and co-operative people other than ourselves are, but a great number of us realise how enriched we are by the contact and exchange. Primarily culturally but also economically.

I work as a record producer, composer and teach production at a university in Germany. The first album I ever produced was by a Turkish artist in London playing Turkish pop music. I was introduced to Turkish culture: wined, dined and entertained among the Turkish community of North London. I learnt about Turkish intonation, instrumentation, technique and rhythm. It was a great experience and a great album, and despite being recorded and mixed on the cheap, it moved all our careers on.

Over the next 10 years or so this process was repeated with Nigerians, Ghanaians, Carribeans, Greeks, Serbs, Indians, Bangladeshis, Black Americans, South Africans, Australians, Chinese, Japanese; Jews, Muslims, Christians, Sufis, Occultists, Buddhists, Rastafarians, Animists, Hindus… and then the complex mixtures of these peoples: the kids from the estates who trawled through their parent’s record collections to bring samples to the studio to be transformed in to Jungle, Techno, Drum and Bass, Ragga, Bhangra…

More often than not people whose cultures have been distorted by colonialism, slavery, indentured labour, displacement, pogroms, fascism and yet all finding new ways to express themselves and co-operate in order to do that.

The music I worked on with these people became the basis of my career. What I learned in darkened, smoky studios surrounded by racks of equipment and constantly shifting teams of people has become my currency as a producer and educator. I can hear artefacts from all those cultures in my work with metamono. It is what I exported with me to France when I went to work with Irmin Schmidt and Can. It’s what I desperately try to imbue my German students with – not just how to do it, but how to feel it. And they have a word for it too:

Despite the devisive drivel of the right wing, what the people of Europe look to Britain for is not mini coopers, cricket or cups of tea – they want our contemporary popular culture. Although TV mini series about the monarchy are popular with their quaint, soap opera depiction of loveable absurdity, where Britain leads is with popular music. The British music that inspires people in Düsseldorf, Valencia, Lyon, Sofia is music that derives from cultural and ethnic diversity, running parallel to all the American and local cultural influences – often equally diverse.

What is “our” culture that UKIP and Michael Fallon would so desperately like to defend for us? Looking purely at music, dance music, acid jazz etc… are both obviously the product of cultural diversity. What about our Indies? Blur and Oasis wrapped in the Union Flag? Pulp and Portishead with almost studied semi-detatched middle-class whiteness? The most amateur musicologist or music historian could demonstrate in seconds the origin of their music in the R&B of the 50s with the cotton fields of the Mississippi delta and slave ships in the background.

The Beatles? The Rolling Stones? Ask Howling Wolf and Lightnin Hopkins about them.

So how about real indigenous British Folk music? A bulwark against diversity, surely?

Morris dancing anyone? That’s Moorish dancing, and those blacked up faces are depicting the African origins of “our” cultural symbol. “Our” music, is played on guitars from Spain and Portugal; brass, woodwind and percussion from Turkey and the Orient; and string instruments from the middle east.

Classical music is largely composed by Eastern and Central European migrants. Perhaps that Polish plumber you thought twice about calling and the Daily Express would have shipped back from whence he came could be related to Chopin, a composer performed tonight at the most exclusive concert hall in your town. And that celebrated pinnacle of classical culture Ludwig van Beethoven himself. African!?!?! Surely NOT screams Paul Nuttall.

Burn the 5th symphony! Ban A Clockwork Orange – again! Didn’t Ludwig van write the music adopted as the European National Anthem? Burn that too!! Burn it all until there’s just me and those genetically identical to me, isolated in a culturally bereft bubble with naught but the FEAR left to comfort me. Yes Paul Nuttall I mean YOU. Personally. You repulsive fucking bigot.

From 1997 – 2006 I lived in France and Germany and worked across Europe. I was a foreigner. When the holiday period ends and you are permanently an outsider, it becomes hard work. It’s fun preparing the line for “do you sell toothbrushes” in your head in another unfamiliar language for the first few weeks, but then it gets tiring. Tiring like when you make a mistake in polite conversation and eyebrows are raised or there are guffaws of laughter. Like when you’re asked about your culture as a means of ridicule (Bouef au Menthe? C’est vrai?!?!). Like when the woman behind the counter in post office/housing office/bank/doctor’s practice shrugs her shoulders, sighs and shouts “next”.

These have all happened to me – and many more – and I’m a white European. I wonder what my experience would’ve been if I was an Arab? Or a Bangladeshi? I would NEVER in my time outside the UK had the courage to start a small business, run a shop or café. Lots of immigrants do. Where does that courage, that motivation come from? How horrific must it be where they came from? How brilliant to be surrounded by people that focussed, that capable. I have nothing but admiration for anyone who could do that.

My point is simple – our culture IS our diversity, and those that fear diversity or use that fear to bolster their grip on political power, are ignorant of the daily realities of how diversity functions and what it brings us all.

In fact ignorance is the driving force of the UKIP’s and their Conservative counterparts. The fear of the other that they feed upon resides in people who never meet the other. Scared people who only contact the diversity of our culture through the prism of history, the whitewash of time, assimilation over generations.

If you love any aspect of British music, then you are enjoying the fruit of our multicultural, ethnically diverse society.  Acknowledge this, respect it, embrace it, feed it and never forget it.