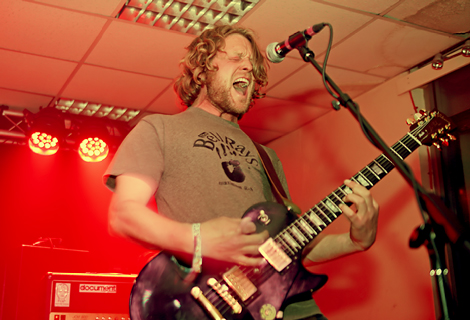 Liverpool’s cult progressive behemoths return with a slab of visceral guitar might, Getintothis’ Peter Guy raises both fists to the heavens.

Summoning in 2015 like Thor’s warhammer colliding with a titanium Java-Bali gong, Bow And Arrow are back.

Long-standing lovers of the heavier end of Liverpool’s music spectrum will be well-acquainted with their cataclysmic mix of doom sludge riffology, primal percussive power and deft guitar intricacies. However, today they’ve revealed their most magnificent offering to date.

Skydrops, recorded back in May 2014 and set for vinyl-only release, was shelved but today lands in its 14-minute glory; from the rolling drum-slam intro to cyclonic crunching chords, a quite beautiful central build of post-rock ambience through to a Kyuss-infused death-roll finale it’s an unstoppable force of wonder that will have you reaching for the repeat button (or a whisky) come the conclusion.