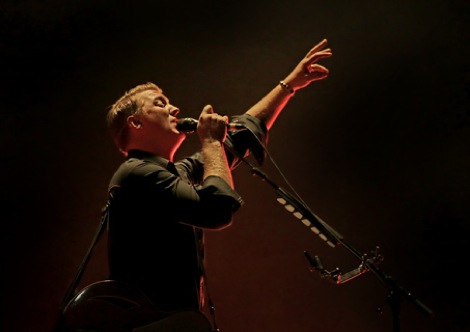 Queens Of The Stone Age’s ascent to the throne of rock royalty has been a gritty one, Getintothis’ Joseph Viney can only pay tribute to Homme and his cohorts.

We might not know the finer details of his life, but it must be pretty fun being Josh Homme.
Leader of Queens of the Stone Age (QOTSA), mentor to the Arctic Monkeys and an extensive background that takes in Kyuss, Screaming Trees, Mondo Generator, Melissa Auf Der Maur and the immense rotation of musicians that encompassed the Desert Sessions; he’s no slouch.
To top it all off, he has a very beautiful wife (ex-Distillers vocalist Brody Dalle), a cracking new album and is in the midst of an arena tour. Not too shabby.
Of course, the interviews surrounding the release of …Like Clockwork touched upon Homme’s declaration that he spent the preceding period in a distinct fug of depression.
Be that as it may, judging by tonight’s showing Homme and his band of fearless acolytes on stage have removed the mask to reveal once more the QOTSA we’ve always known; fun, powerful and effortlessly cool. 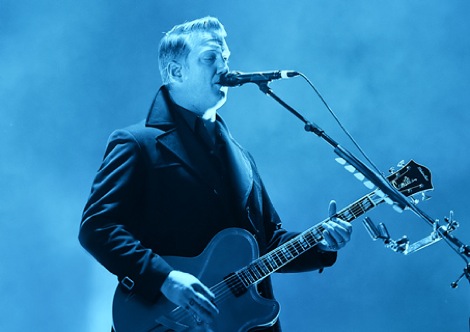 Josh Homme at the Phones 4 U Arena, Manchester
It’s evident from the off; the rolling thunder of opener You Think I Ain’t Worth A Dollar, But I Feel Like A Millionaire gives way to the once-ubiquitous-but-no-less-fun swing and swagger of No One Knows and the crowd are in the palm of their hands.
It’s a grip they choose not to relinquish, plundering their excellent discography for killers such as Lost Art of Keeping a Secret, Burn The Witch, Sick Sick Sick and the rather quite erotic Make It Wit Chu.
Drumming duties on this tour have fallen to ex-Mars Volta man John Theodore. If you can’t get Dave Grohl or Joey Castillo, just get John Theodore! What a choice to have. 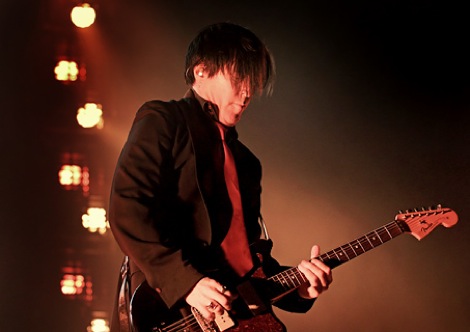 QOTSA’s Troy Van Leeuwen at the Phones 4 U Arena, Manchester
It’s not just all about the old stuff though. The newer tracks stand up beyond all reason. If I Had A Tail’s sub-disco stomp, Smooth Sailing’s twisted funk (just listen to that bit from 3:48 onwards and dare to not love it) and I Appear Missing’s grandiosity are signs that the ever-versatile Homme would probably rather die than rest on his laurels.
The end of the night is typically titanic, and a ground-shaking turn of A Song For The Dead, sadly sans Mark Lanegan’s gravel gargle, leaves nobody in any doubt as to who the new rock royalty is.
They call Josh Homme the Ginger Elvis. Elvis was never so slick!
Pictures by Getintothis’ Sakura Zilla.
Further reading on Getintothis:
Boneface, Queens of the Stone Age and an illustrated war of attrition
Future of the Left: East Village Arts Club, Liverpool
Mainliner, The Left Hand, Fortunatus, Norweb: Blade Factory, Camp & Furnace, Liverpool