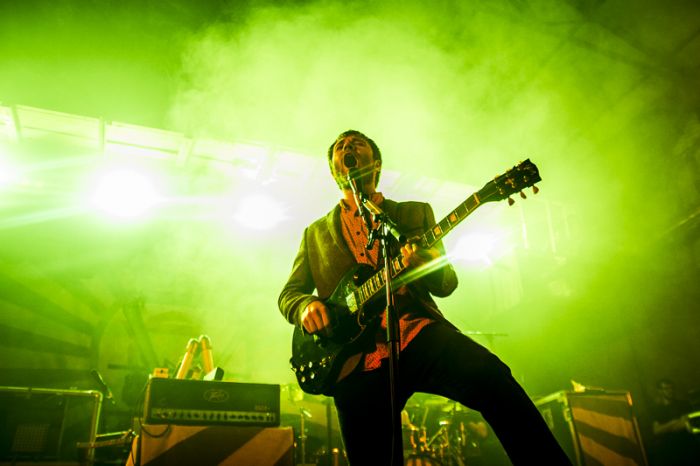 Visceral as ever as they hurtled from the classics to new material, Getintothis‘ Nick Maw was at the Camp and Furnace to catch Enter Shikari see off the year in typical style.

Enter Shikari still have a strange kind of popularity, a word-of-mouth teenage appeal that the sensible bets might have thought would’ve dissolved with maturity by now. Yet some three years after the mammoth mainstream crossover of A Flash Flood of Colour, just a glimpse of the simmering Camp and Furnace crowd that lie in wait for the headliners’ Christmas spectacular is enough to affirm that that feverish fanbase remain as eager ever for their oh-so particular blend of reckless abandon.

Yet with the madness to come and technical difficulties to laugh off, openers Allusondrugs still have to deliver their admirably confident set to the still-subdued crowd.

A grinning remark about “who you all want to see” is tellingly met with more cheers than many of their songs, and though the audience begin to get involved as Baby Godzilla – support once again after 2013’s joint New Brighton visit – tear through their follow-up, it’s clear that the majority are only here to see one band only.

As has become typical of Enter Shikari’s festive shows, they briefly massacre a Christmas song before beginning their set in earnest. The moment that Carol of the Bells shifts into Solidarity, the audience finally, willingly, let out all their anticipation in a single moment of relief. A mosh pit forms and the crowd rarely let up for the duration of the gig.

The undying support for this band is irrefutable; Reynolds’ sheepish apology that they will play two new songs is met, to his surprise, with genuine enthusiasm. It is clear how much this band strives to satisfy their audience and they play songs from across their discography.

Fan favourites Mothership and Destabilise cause the crowd to heave forward whilst the thrashing beat of Slipshod kicks new energy into the pits, and through this surging madness, so typical of an Enter Shikari gig, comes Constellations, the one song not entirely heaped in angst. Though fragile vocals and stripped back instrumentation is far from characteristic, once again their crowd willingly accept it and, perhaps a little awkwardly, rush to wave their lighters.

The group retain their enthusiasm throughout the show and, to the delight of their fans, dive into the crowd to play their final song held upon their arms.Enter Shikari’s gigs are infamous for their intense atmosphere, and this show is no exception; the crowd’s relentless moshing leaves them drained and drenched in sweat.

What this show confirms, then, is just how well Enter Shikari perform live; carrying genuine enthusiasm and complete understanding of their audience’s expectations results in a refined, yet utterly uncontrived performance.