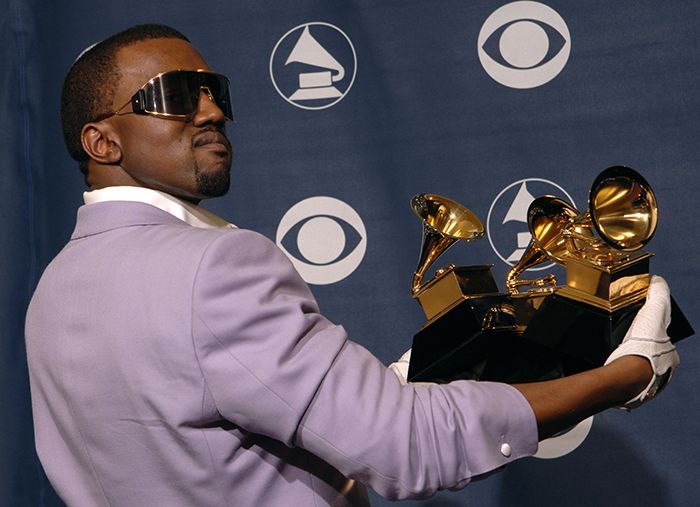 As we gear up for the 2015 Grammys, Getintothis’ Steph Niciu and Chris Burgess take a look at some of the best performances over the years.

This year’s crop of musical talent will be vying to get their hands on the famous golden gramophone trophy to display proudly on their diamond encrusted mantelpiece (although if you’re Beyoncé and Jay Z’s daughter you can probably just drink your juice out of it).

British acts Sam Smith, nominated for six Grammys including “Album of the Year” for In the Lonely Hour and Clean Bandit, up for “Best Dance Recording” for their mega hit Rather Be, will be hoping for a win, not least to send their album sales stratospheric.

As usual, there will be a staggering amount of categories awarded, including ” Best New Age Album“,    “Best Improvised Jazz Solo” and ” Best Contemporary Christian Music Song” (although surely they mean ‘Least Worst…’ for that last one).

Performances are expected from old-timers Madonna and AC/DC, alongside relative newbies Ed Sheeran and Ariana Grande.

But, the Grammys isn’t just about the awards: it’s about the music too, so let’s take a look at some of our favourites. Sadly Soy Bomb didn’t make the cut…

The King of Pop, perhaps at the very peak of his career, gave a typically overblown and over-long performance, complete with gospel choir, trademark dance moves and horrible white socks.

Yet despite the self-indulgent second half of the song, you cannot take your eyes off Jackson – he’s simply hypnotic.

Recorded at a time when Blige was recovering from drug addiction and abusive relationships, No More Drama is an extremely emotional and powerful song – made even more so at the 2002 Grammys by Blige’s raw and quite frankly incredible vocal display.

This is one of the most real performances you’ll ever hope to see – Blige spitting out every word and exorcising many demons.

Daft Punk and West – winning the “Best Rap Solo Performance” gong – went all out during the 2008 show, introducing us to the two most iconic fashion statements of the 00’s – Kanye’s light-up glasses and the French duo’s Tron suits.

It was retro-futurism at its barmy best, the slick production of Daft Punk serving as a perfect foil to West’s exuberence, with a pyramid thrown in for good measure.

Bey and Jay are arguably the most powerful couple in music, so when they came together to perform Drunk in Love last year, the place erupted. Beyoncé was sexy and sensual belting out the high notes.

Jay Z looked like he was wearing his dad’s suit – but we won’t hold that against him.

A pivotal moment in Eminem‘s career, this one?  Accused of homophobia for some of the lyrics on The Marshall Mathers LP, his Grammy-nominated album, some saw this as a watershed moment – teaming up with Elton John to dispel those accusations.

Looking back, the song seems quite dated, with John‘s vocals veering towards Vic Reeves’ club singing style. However, it’s the message this collaboration sent out that’s most important about this performance – awkward hug and all.

Shortly after undergoing throat surgery, Adele made her comeback by singing her smash hit Rolling in the Deep. The song itself was massively overplayed in the year leading up to the 2012 Grammys, but somehow Adele managed to make it sound fresh and crisp, showing why 21 won a bucketload of awards.

Holograms galore, certainly a first for the Grammys – this is a crazy performance that shouldn’t really work, but somehow does.

Gorillaz were joined by veteran rappers De La Soul before the tune segued into the ABBA-sampled, Hung Up. Madonna – looking a bit Margi Clarke – certainly puts in the effort here, with dancers galore filling the stage.

And no, we don’t know how she walked behind the hologram either.

Two vocal powehouses paid tribute to Janis Joplin. As Stone began with Cry Baby, Etheridge came on stage to join her for Piece of My Heart. Etheridge steals the show here, belting out Joplin’s classic just months after being diagnosed with breast cancer, still bald from chemotherapy.

This was more than a performance of a couple of songs, this was a tribute to strong women everywhere. That scream at 4:27 is simply one of the best in music history, too.

Pink’s appearance was one that kept people talking – her rendition of Glitter in the Air was Cirque du Soleil-inspired, as she twirled so elegantly up above the audience, managing to deliver a wonderful vocal at the same time.

As Grammy performances go, this was one of the most unique and beautiful – a world away from her brattish debut Get the Party Started, Pink’s vocals are  simultaneously strong and delicate, her acrobatics both sexy and artistic.

When the Clash‘s legendary frontman Joe Strummer died in 2002, The Boss and some friends decided to pay tribute to him by coming together to perform an emotional version of London Calling.

Yes, van Zandt tries his best to ruin proceedings with his faux-cockney vocals, but his heart was in the right place. The quartet run through the song at a frenetic pace, sharing vocal duties. “This is for Joe” Springsteen shouts at the start – we don’t think they could have given him a better tribute.