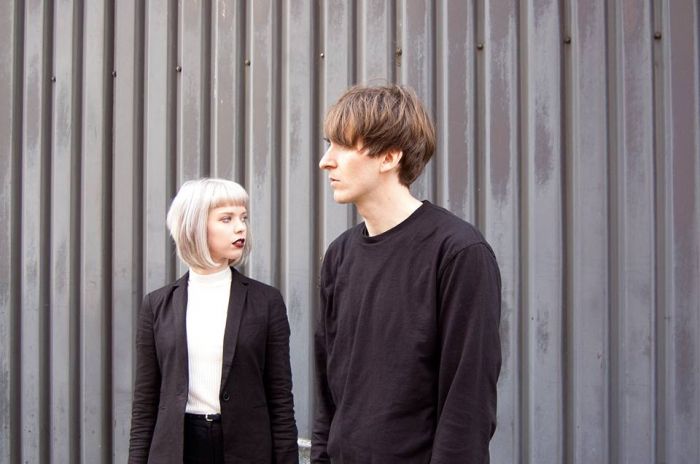 Liverpool/Manchester-born synth-poppers Jupiter-C might be the coolest band in the world right now, but is there substance to back the style? Just about, says Getintothis’ Patrick Clarke.

If not the best pop duo in the world, Jupiter-C are certainly staking their claim as the most stylish on their latest double-release, Locust and The Process, which appear (naturally) on cassette this April 13.

The Process is the second to be aired, along with its accompanying video. Slick, tight and cool-headed, there’s a nod or two to modern psychedelia and the winsome claustrophobia of Broadcast at their best, but the Liverpool/Manchester-hailing pair use those rich veins of atmospherics to inform, rather than ape, holding back on any intrusion of influence in aid of their own unswerving minimalism.

Synthesized woodwind add hints of mechanised warmth, but for the most part The Process feels detached, the pair, Ashiya Eastwood and David Kane, sighing distant, breathy vocals that interweave atop a shrouded, hazy beat.

The accompanying video for the tune, which you can view below, is the perfect complement, shot on a considered, pin-point aesthetic through a grainy, retroist lense, the musicians obscured, voguish and aloof as they paw with calculated disinterest at their synths.

Locust sees the duo spread their wings musically a little more, and is all the better for it. Though The Process is enjoyable enough and tonally beguiling, Locust builds much more on the band’s defined atmospherics to a more swarming, overwhelming end.

Eastwood‘s vocals take the lead on Locust, lent a brooding fogginess from the track’s production and a new-found depth beneath their former detachment as sinister stabs of synth cut in from the bedrock of buzzing static.

Ultimately, Jupiter-C are still more style than substance, even though they succeed on both counts. Should they capitalise even more on the latter, it’s easy to see them turning their visual sophistication into something truly significant.