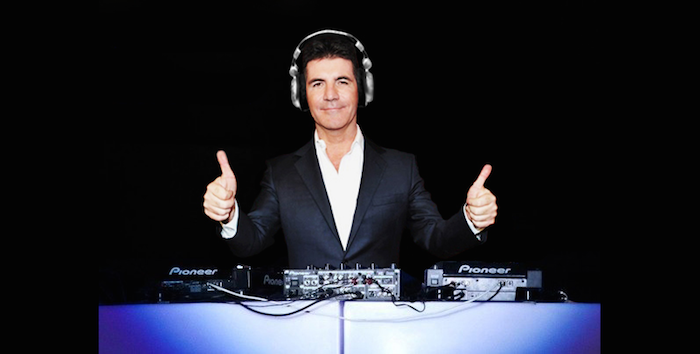 With Simon Cowell this week announcing his X Factor for DJs, Getintothis’ Shaun Ponsonby can barely contain his excitement.

So, after almost no anticipation and/or fanfare, Simon Cowell has announced his new TV talent show, Ultimate DJ. That’s right! The show nobody gives a shit about is finally getting made! Yaaaaaaaay!

Not content with merely creating quick, flash-in-the pan success for singers before dropping them immediately after the campaign for their debut album has ended, Cowell now wants to do the same for DJs.

Let’s face it, Simon Cowell’s “golden touch” has been greatly exaggerated. Sure, The X Factor and [insert country]’s Got Talent have both been big hits, but the former is a natural extension of the format Simon Fuller had for Idol, and the latter is nearly exactly Opportunity Knocks. It’s the oldest TV format going.

However, everything else he has done has tanked mercilessly. Grease Is The Word? Failure. Rock Rivals? Failure. The X Factor musical? Failure. The Pudsey the Dog movie? Failure. That cooking thing that rode on the coattails of the Great British Bake-Off? Failure. Let’s put it this way; Red or Black was once beaten in the ratings by Indiana Jones and the Curse of the Crystal Skull, despite the fact that Shia LaBeouf is in it. Hell, even The X Factor itself seems to be on its last legs these days. It seems the British public aren’t fooled as easily as Cowell‘s ego would want.

But, fair play to him, he’s great at hype. That’s why the two shows that have been so successful have entered the zeitgeist in such a massive way. The whole Susan Boyle thing a few years ago is a significant example of that. Everyone was so shocked that a woman who didn’t look like Beyonce could belt out a tune, a trend that itself largely exists so the kind of programme Simon Cowell makes can make fun of people who look like Susan Boyle. It was a strange vortex-type situation, that’s for darn sure. And he was able to successfully exploit it in a way that absolutely guaranteed success. Obviously, the price of that was Boyle’s mental health at the time, but fuck that because business-wise it worked a treat.

So the general failure of the majority of his projects may be one of the reasons ITV didn’t bend over backwards this time around, but the other might be the entire nature of this idea.

See, the kind of pleb who has no talent, but will happily sit on his cheap arse laptop and write articles bitching about people who do have talent can tell whether or not someone can carry a tune by simply hearing them sing a tune. You can watch someone sing on TV and feasibly be marginally entertained by it. Similarly you can tell when someone sounds as appealing as an alarm clock at 6am on a Monday morning, and you can be amused by that as much as you can be entertained by a good singer.

But DJing is a whole different thing. Essentially when watching a DJ contest on TV, for most people – i.e. anyone who is not a DJ – they’re watching a man standing in a spotlight putting songs on. Unless they go down the Soul Train route and have dancers in the studio, it’s hard to see how that would translate to a mass ITV audience, hence the move online.

A DJ set is something that really has to be experienced in the flesh. More than singers, it’s about being there and experiencing it. Plus you can’t know if a DJ is any good in the two minutes that Cowell gives his acts on his other shows.

Furthermore, like all of his projects, this will likely be decidedly lowest common denominator, because Thor knows Cowell is only going to latch onto current trends. Even though EDM seems to be on its way out and he has clearly come to the literal party late. This means that the kind of awe-inspiring turntable collages that people like Terminator X pioneered and turned turntablists into actual living, breathing  virtuoso musicians will probably be absent.

The reaction from the dance community seems to have been a unanimous “get fucked”. Fatboy Slim and Gorgon City both outright refused to be involved in the project, the latter calling it a “bad idea”. The former said “As dance music gets taken over by people like Cowell, it becomes about being famous and money, the nasty side which I think for years it was relatively free of. Kids grow up thinking to be a DJ, you’ve got to be sexy and bling…it’s not about that.” I’m personally yet to see a DJ support the concept. But is that down to integrity or snobbery? Is the show likely to court an audience not already interested dance music? Are people already into dance music likely to watch it? It’s not impossible, but I’m still going to bet on unlikely.

The full format of the show is yet to be revealed, but Cowell is a bit of a one trick pony, so I’m willing to expect all of his usual jargon.

“My name is Lee, but I go by the name LeeJay. I don’t really, but I need something that will make people smile and like me, so I’ve adopted an adorably lame stage name. I’ve had a hard time the last few years. I slept rough one night so I could get to the front at Creamfields, so the producers have told me that this means I was homeless. My goldfish died recently, and I was bullied in school about 15 years ago. These things may be largely rudimentary and uninteresting stories of heartbreak that seem mundane because pretty much everyone has gone through it, but mine had a greater effect on me because I’m on telly and you’re not. For my day job I work in a call centre. Everyone on the show will patronise me for this and will be flabbergasted that anyone who has a boring job displays any talent in anything ever. None of this has anything to do with my DJing skills, it’s just that the producers have already decided who will go far in this competition and are focusing on us, even when we’ve got absolutely nothing to say. Like this; salagadoola mechicka boola bibbidi-bobbidi-boo.”

Simon Cowell understands the record industry because he executively produced novelty hits for Zig and Zag, Power Rangers and Sinitta. I know that sounds sarcastic, but it’s not. Clearly he understands something about the industry of selling a product to a mass audience, no matter how trite it is. But that mass audience isn’t necessarily correlated with the dance scene.

Does he seem to have the same understanding of the scenes inhabited by DJs?

What do you think?

At the end of the day, though, it is at least a sign that DJing as an art form has permeated popular culture. You know that’s the case when Simon Phillip Cowell thinks he can squeeze a healthy profit out of it. Maybe that’s the key; we have to create something to ironically permeate popular culture that will lead to Cowell misunderstanding it, seizing it and, eventually, his inevitable downfall. Homophobic fart scatting? Xenophobic wank singing? Anything that the world can troll him with. Then away he goes. Forever. With egg on his face.

Thom Yorke has graced the cover of an Iranian sex and relationship book. Thom Yorke is also being used to sell medication in Russia. Thom Yorke is apparently staging some kind of mini-Orwellian present reality, with himself at the centre.

Stephen Hawking is appearing at Glastonbury. Some people have been bemused by this, but lest we forget he has appeared on two Pink Floyd albums. Let’s hope he’s launching a solo career.

After learning brother Noel was planning a solo album whilst still in Oasis, Liam Gallagher tweeted that he was “busted“. On what isn’t exactly clear. But I know one thing’s for sure, its impossible to release a solo album whilst still in a band. Oh, wait…no it isn’t. Knob. Meanwhile, there are rumours that Liam will be reforming Oasis without Noel. So, Beady Eye only playing Oasis songs. Knob.