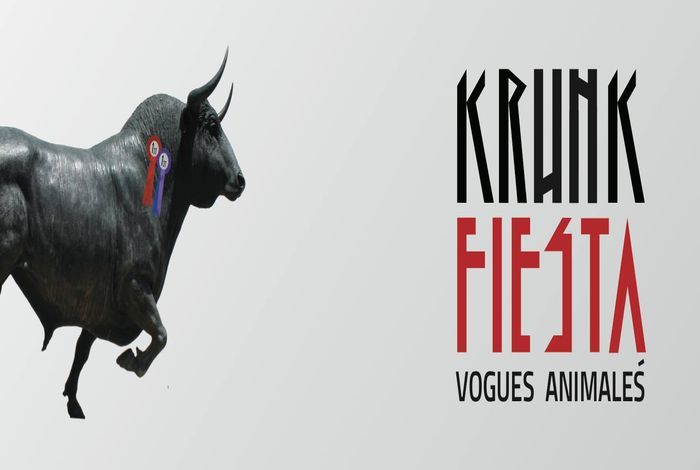 The Kazimier have announced a raft of quite ludicrous acts for this year’s Krunk Fiesta, and as Getintothis’ Patrick Clarke can reveal, it’s going to be something truly spectacular.

To soothe a city’s multitude of broken hearts, one of the first announcements made by The Kazimier after we revealed that they were to close their doors was of this year’s edition of the still-living legend that is their now-annual Krunk Fiesta.

Combining Spanish themed festivities with the customary performance theatre, costume spectacular and vaudeville humour, and with the all-day event marked for June 13, the venue have revealed a huge wave of names set to provide the entertainment on the day, which lasts from 3pm ’til 3am.

London-based dance collective Afriquoi head the bill so far with a live show to bring their acclaimed blend of traditional African music and the cutting edge of British electronica, while “dangerously ambitious and delusional all-girl jazzy, post-pop-punk, hip-funk outfit” (in their own words) Ravioli Me Away will also be making the trip from the capital.

Also on the bill are Kero Kero Bonito, who were on Getintothis’ Peter Guy‘s list of highlights from his adventures at SXSW earlier this year – whom he named “Ridiculous and sheer fun… a dancehall of delight”.

Among the rest of the raft of names are Liverpool’s own Dogshow and A.P.a.T.t., as well as Rajasthan Heritage Brass Band, King Lagoon’s Flying Swordfish Band, Snapped Ankles, and an assortment of DJ sets and many more, with further acts to be announced, including another headline act.

The revelry takes the guise this year of Vogues Animalés, and The Kazimier extending their warmest invitations to “Join us in La Auditorium D’Animalés as the showdown commences: Fashionistá Flamencos versus Pedicured Pelicans, Catwalk Cockrells versus Butch Bulls, Runway Rats versus Combating Cats, Jousting Giraffes versus Gigolo Jackells”.

Should that not have whet your whistle by now, check out our picture gallery from the madness of 2012’s Krunk Olympics for a smell of the scenes to come, and take a gander at the official teaser video below.

Update: Inspiration for next week’s fiesta costumes have now been revealed – take a look.

Tickets are £15, and are available now both online and in person at the Kazimier Garden.