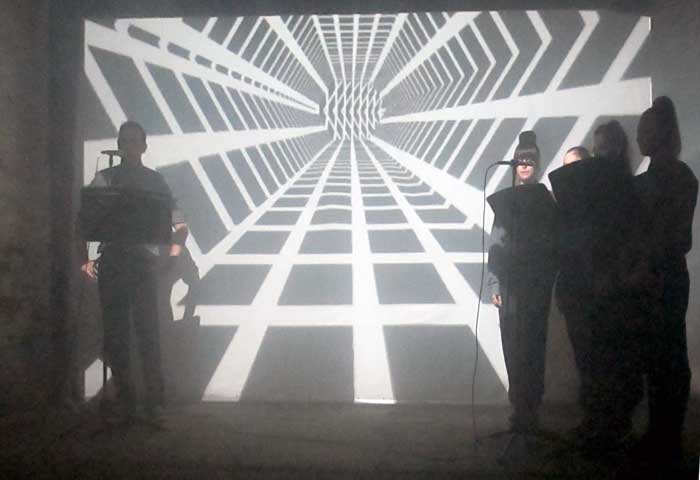 Supreme leaders, fragmented digital limbs and a night of surprises, Getintothis‘ Laura Coppin on the sensory experience at Syndrome.

As Friday’s baking sun hung heavy over lumbering giants and hordes of tourists, over in the Baltic Triangle a diverse crowd were instead waiting listlessly to be allowed entry into Syndrome’s latest venture.

Had it not been so hot however, there would have no doubt been a great deal simmering tension starting to arise. Having arrived for the strictly enforced start time of 8.15pm, those queuing instead found themselves trickling into the outwardly unassuming 24 Kitchen Street one by one – before facing a barrage of questioning and security measures as soon as they crossed the threshold (all of which was pointedly recorded for later use).

For those already familiar with the work of a.P.A.t.T., this start to proceedings will come as no surprise. After all, their works are notable for the majestic level of confusion and annoyance they (very deliberately) inspire in their audiences.

Syndrome 2.0 saw the creation of State Free State of a.P.A.t.T Island, a gloriously immersive totalitarian and dystopian city state which turned the audience themselves into its citizens. Following the excruciating entrance, a flurry of camera lenses and rictus grins announced the next stage of the journey: facing the state media machine. Makeup, canapés, insincere compliments, and detestable soymilk concoctions were all thrust upon each citizen before they were finally ejected into the event’s main chamber, The Quad.

A huge digital screen formed the backdrop for the members of a.P.A.t.T. performing inside, their heavy drone creating a tangible weight upon the room. So far, so brilliantly immersive. 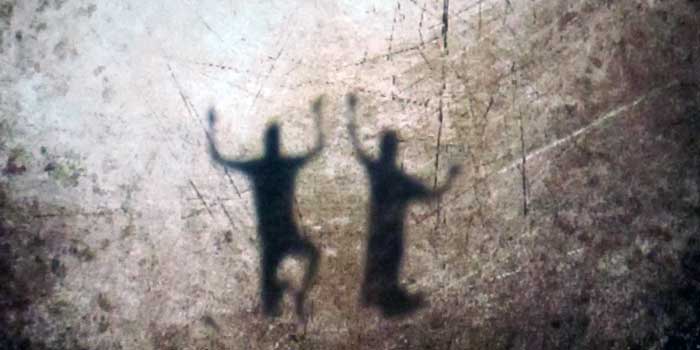 Next came Antonio Roberts and Rachel Sweeney’s QWOP, a dance piece set before a screen of whirling fragmented digital limbs. While the performance itself was fantastic, it didn’t feel like it sat seamlessly into the overall experience the evening provided. Perhaps it was simply this citizen’s own love of the nauseating, twitching puppetry behind the game of the same name, but QWOP seemed to have missed the chance to explore the darker side of externally controlled bodily movement.

After a short interval Phase Two began, bringing with it The Nodes, a shadowy exploration of power and control which was darkly hypnotic. Bodies moved in and out of focus and the clink of pickaxes formed part of the thrumming sounds which filled the room.

Swiftly following this a.P.A.t.T. themselves returned to the stage, performing a violin duet which followed into a piece interweaving spoken word and dance with whirling light and looming sound. One of the front dancers was particularly good, moving her body with astounding accuracy and control as the piece built to a climax.

Phase Three, the final segment of the evening, saw the state’s citizens finally come to face with their beloved Leader. Fog billowed as a portion of the floor was lifted, revealing a jumbled mass of brick forming a vague plinth. Overhead a trapdoor opened, and down an unfurled helicopter’s ladder clambered a masked figure.

The Supreme Leader had arrived. 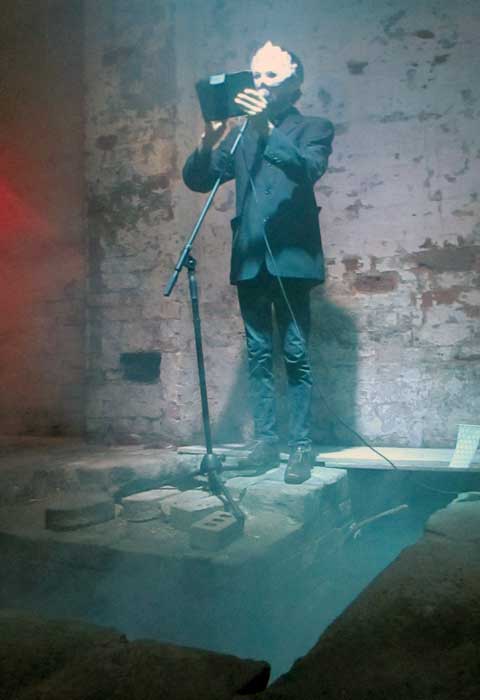 Using the crumbling brick plinth as a podium, and accompanied by the frenzied screams of the national anthem’s trumpets, he launched into an impassioned speech which flowed and swelled with the music. Only a few of his words were completely audible, creating a dramatic soundscape which embodied the state itself.

Overall, the evening was a fantastic success, though the concept was incredibly ambitious. A few technical problems reared their heads, but they were handled well and weren’t particularly obvious. I urge you all to support wonderful and exciting ventures such as these,  which you can do by attending Syndrome’s next event on August 21 featuring a room-as-instrument devised by artist Jamie Gledhill with sound manipulator Stefan Kazassoglou. 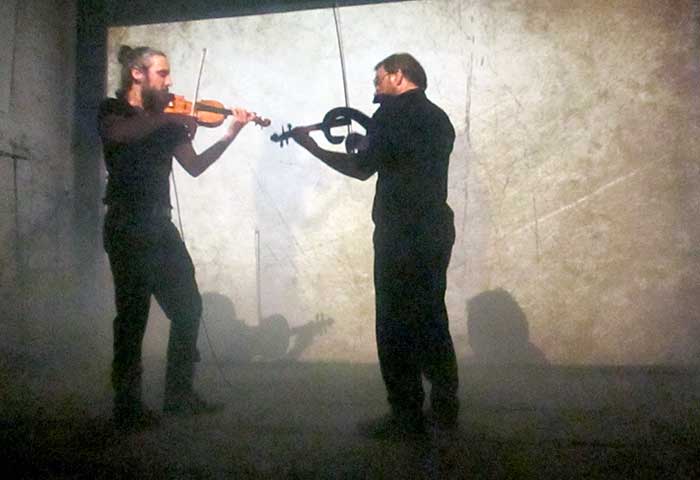