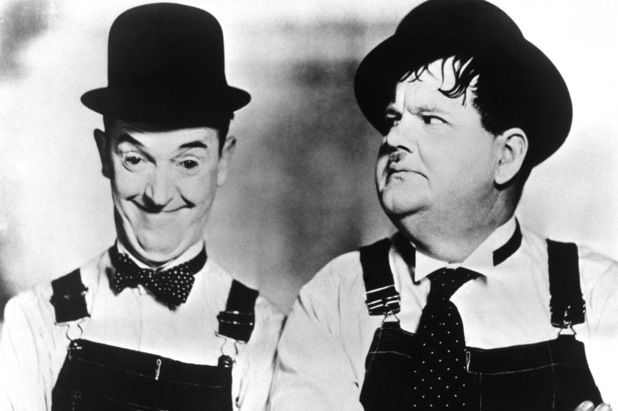 As Showcase Cinemas announce that Liverpool is to launch a series of screenings of Laurel & Hardy’s finest films, Getintothis’ Shaun Ponsonby reflects on the legacy of the greatest comedy duo of all time.

This week, Laurel & Hardy superfan Ross Owen has teamed up with Showcase Cinemas to co-ordinate screenings of some of the legendary duo’s classic films across the UK, with Liverpool acting as the launch night.

The screenings have been arranged for two reasons; firstly, to celebrate the 125th birthday of Stan Laurel, the genius British half of this timeless twosome.

The second is to introduce Laurel & Hardy to a new generation. Owen explains his reasoning behind the project: “We want to encourage people to put down their iPods, tablets, iPhones and laptops for a couple of hours and come along and enjoy Laurel & Hardy… in a cinema… with a packed audience! The way they were made to be seen.”

Laurel & Hardy made over 100 films in their time, and two will be screened at the launch night, with special guests in attendance.

The first is the short County Hospital, a pretty standard affair for a Laurel & Hardy short. No major storyline, rather just a set up where the gags write themselves. As soon as we say “Stan goes to visit Ollie in hospital”, you know exactly what you’re going to get, and it certainly delivers on every beat.

The second will be the classic feature Sons of the Desert.

Sons… is one of the more perfectly plotted films within the L&H canon. It showcases the talents of not only our protagonists, but also their writers and co-stars. The farcical element of their style of comedy is probably at its best here.

The set-up is almost deceptively simple; Stan and Ollie want to go to their fraternity’s convention. Ollie’s wife reminds him they are taking a vacation to the mountains that weekend. Zany scheme ensues. Zany scheme is found out. Stan has hilarious breakdown. Ollie’s wife throws crockery at him. Fin.

Like most Laurel & Hardy films, it’s the performances that truly bring the film to life. For obvious reasons, the silent and short films they made tended to rely on slapstick, and that was always a large part of their work. However, like most slapstick – from Laurel & Hardy to Looney Tunes – it’s not the violence itself that truly brings the laughs so much as the anticipation of violence, and the features gave more room for this, allowing the duo to really show off their talents.

The final scene, in which Ollie awaits his wife’s wrath, might be the funniest silence in cinema history, played perfectly by Hardy. His character throughout the films often fidgeted with his tie during times when he was nervous. Here, it goes on for an interminable length of time. He fidgets, he taps the table, he smiles, he frowns, he twiddles his hat, he plays with a glass on the table, going as far to pick it up and use it to make a foghorn sound. His actions become more and more overwrought as he, and the audience, anxiously awaits the moment of impact. Throughout, Mrs Hardy stares, not moving a muscle. Until he can take no more, looks her directly in the eye and feebly attempts to appease her, “How about you and me going to the mountains?”

Similarly, when the boys are confronted by the wives for a confession and they refuse, we know full well that Stan is going to break, and in the most wonderfully maladjusted fashion. But as brilliant as Laurel’s breakdown is when it finally arrives, it’s his wife’s actual confrontation that is the most purely funny moment in the scene. Waiting, with us, for Stan to have his moment.

One of the things that make Laurel & Hardy so consistently funny was that neither of them were dedicated straight men. There was no equivalent to Ernie Wise to suffer Eric Morecambe. If anything, the straight men were the supporting players, most notably James Finlayson (arguably their finest antagonist, and the person whom Homer Simpson’s cry of “D’oh!” is based on).  Ollie thinks he’s the straight man, but he is just as stupid as Stan, which in some ways makes him dumber due to his partner’s complete innocence.

There’s rarely a happy ending in their films. Things don’t go well for our heroes. Usually, there is an unfortunate ending. Any great comedian will tell you that the comedy comes from him or her being the stooge. So, even in the few instances of a happy ending such as Way Out West, where the duo complete their task completely successfully and overcome Finlayson and his unjust plot, there is still a call back to a running gag of Ollie falling into a sinkhole whilst crossing the stream.

Although it is all in black and white and features some effects that look undoubtedly flimsy, the vast majority of the material has aged remarkably well. You have two idiots, and a bunch of dignified people walking around with pies on their faces. That translates everywhere, and in any age. For this writer, Laurel & Hardy are Hollywood’s original comedy geniuses.

The screening of County Hospital and Sons of the Desert will take place at Liverpool Showcase Cinema on June 1 at 7.30pm.