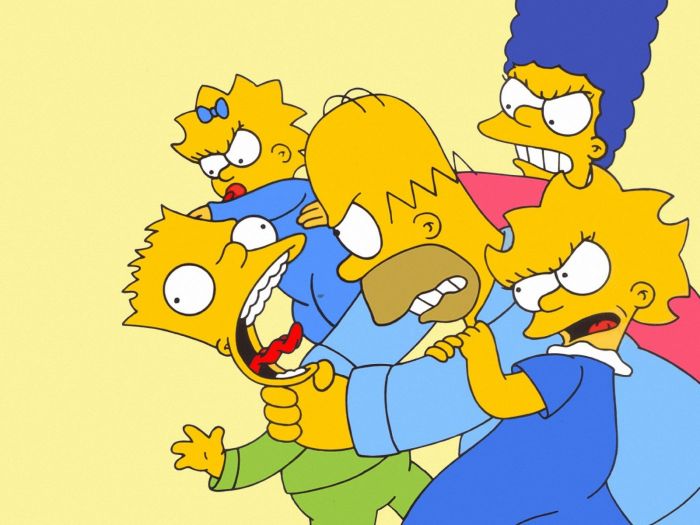 The most profound artistic expression of our time?

Everyone knows that – despite its present state – The Simpsons’ peak years represent the greatest, most perfect television that has ever been made by anyone, ever, in the history of people making television. It is pretty much taken for granted as fact. To write an article arguing that point would be entirely moot. Anyone who disagrees should probably re-familiarise themselves with those episodes, because you’re obviously mistaken.

Therefore this is not what we’re going to discuss. We’re here to argue that The Simpsons goes one step beyond. We are boldly going to suggest that, up to around season 7 or 8, The Simpsons is the defining artistic work of our age. That in 100 years’ time The Simpsons will be taught in history and English literature lessons the same way Shakespeare and Dickens are.

Oh! We balked too when we read a comparison to Shakespeare and Mark Twain in Zombie Simpsons, a book that looks at the reasons why The Simpsons was so great and examines why it has declined so mercilessly. It makes the reference in passing and doesn’t make much of it. As much as we love The Simpsons, even we thought that was going a little too far.

But then we started thinking about it. Even though the reason we have elected officials is so we don’t have to think all the time.

It’s easy to needlessly embiggen the things we love, so we’re going to try hard not to do that here. But even looking at it completely objectively, we can’t think of any other work in our time that has captured the world we live in so well, with such biting wit, such timelessness and such heart. Every aspect of the show was multi-layered in its golden period. No matter how many times we see those early episodes, even now, twenty years and dozens of views down the line, there are social commentaries, visual gags, subtle truths and jokes that are funny for three or four different reasons that we are still only spotting for the first time.

Compare it to a Seth MacFarlane cartoon. The difference is staggering. Yes, Family Guy has a lot of quotable lines and laugh out loud moments, but it always lacked the humanity that made The Simpsons feel real. Because as unnatural as it might look, there has never been a TV show that is so easy to relate to.

The classic family sitcom was cosy, sweet and sickly. Everyone walked around with painted on smiles. Like Urkel. People loved their jobs, no matter how mundane, and their families were well-behaved and, on the rare occasions they weren’t, at least had the decency to learn a life lesson at the end. Like Urkel.

The Simpsons were the antithesis. That’s why it was such a hit from the moment it debuted. It’s easy to forget now, but it went completely against TV conventions. They weren’t scared to face reality. Springfieldians hate their dead-end jobs and sometimes feel trapped at home, and they weren’t shy about making it known.

There is not one institution in Springfield that isn’t corrupt or run by the callous; Moe, Apu, Principal Skinner (in fact, everyone in Springfield Elementary), Chief Wiggum, Krusty The Clown, Mr Burns, Captain Whatshisname (Rev. Lovejoy – ed.). Every one of them either incompetent, amoral or just overall revolting people, but somehow still retain a truly human quality. It’s not only something we identify with, but it probably articulates our own lives and experiences. For better or worse.

And the people of Springfield know it and, like the rest of us, just go about their lives knowing it. Mayor Quimby‘s sexcapades aren’t scandals, its pretty much taken for granted. In Bart’s Inner Child he publicly exclaims “this is not my wife, but I am sleeping with her”, and in Marge Vs The Monorail, when Wiggum tries to blackmail him with salicious photographs, he responds; “you don’t scare me, that could be anyone’s ass“.

A more recent show like Family Guy lacks the heart and the intelligent satirical edge. It’s also telling that when the glorified fanfic crossover between the two made references to each show, the Family Guy references were just running gags, whereas a lot of The Simpsons references were based on singularly famous scenes that have been ingrained into popular culture.

Of course, they have only been allowed to do this due to a unique arrangement with the Fox network. So popular was The Simpsons in its earliest years that they were able to sign a contract that stated Fox and owners News Corp are not allowed to interfere with their creative process. Completely unheard of, and probably explains the amount of jokes at Fox’s expense over the years.

Rupert Murdoch might own it, but can’t touch it.

But, obviously, you can read all that factual history anywhere. We’re here to back up this hypothesis. Let’s see if we can do it justice…

The idea that these people are untouchable is thrust upon us. We’re automatically programmed to know that Dickens was the greatest writer of his day. It’s reasonable to assume that in the 19th century he was just really, really popular. Nobody in that age would have guessed that they would be teaching his work in primary schools a century down the line. The reason they do so is because it was the most accurate satire of Victorian England, much like The Simpsons to the modern West.

What or who else dealt with both our everyday lives and the bigger life questions as successfully as The Simpsons? In the golden period alone they produced sagacious satire that honed in on; religion (Homer the Heretic), the political class (Sideshow Bob Roberts), dishonesty in the media (Homer Badman), the problems plaguing America’s schools (The PTA Disbands), sexism in the workplace (Marge Gets a Job), vegetarianism (Lisa The Vegetarian), homophobia (Homer’s Phobia), immigration (Much Apu About Nothing), alcoholism (Duffless), unions (Last Exit to Springfield), the legal system (The Boy Who Knew Too Much), childcare (Home Sweet Homediddly-Dum-Doodily), spiritualality (Bart Sells His Soul) and, of course, the perils of littering in front of Bette Midler (Krusty Gets Kancelled). And that is on top of the family issues and cultural parodies that are so prevalent in our everyday lives for which the show is best known.

Over 100 years after Shakespeare’s death, he was quoted more than any other when Samuel Johnson published A Dictionary of the English Language. Despite still being with us, The Simpsons has been responsible for the entries of both “cromulent” and “D’oh!” I don’t see Friends getting into the fucking dictionary. Is “eat my shorts” not as famous as “my kingdom for a horse”?

Words are only added to the dictionary after popular usage. So, we ask you; how often have you quoted The Simpsons? Sometimes it feels like we do it daily. Often without even realising it until afterwards. You could probably walk into any room populated with people born after 1980 and quote a random line from the show’s first decade, safe in the assumption that at least 90% of the room will know exactly what the reference is (N.B. like the angel skeleton in season 9, this is not scientifically tested).

There have already been cases of The Simpsons being taught in schools. In 2010, Kingsmead Community School in Somerset were teaching The Simpsons , with 400 parents of the pupils signing a petition against the concept. One of them, named Joseph Reynolds, told the BBC; “I don’t think it’s strong enough content. If you want to use The Simpsons once in a while as a hook to get kids interested in…stronger content, I think that’s great. There’s a big difference between that and actually teaching The Simpsons for six weeks.”

Well, it may shock Mr Reynolds to learn that a large part of this generation’s world view has been shaped by this content that you don’t think is “strong enough”. In fact, this writer has probably learned more from The Simpsons than he ever did in school. What constitutes “stronger content”? Something that’s 400 years old and written with language that is no longer used? Pish! I learned that Lord Palmerston was the greatest British Prime Minister. And did A Midsummer’s Night Dream put Brockway, Ogdenville or North Haverbrook on the map? No, Mr Reynolds, it didn’t.

Of course, the decline of this once-untouchable TV show has been sad to witness. To be fair to Mr Reynolds, the subtle social commentary – always surprisingly balanced and never preachy – that once pushed it to a higher plane has been replaced by increasing stupidity and outlandish slapstick. That always existed, but they were able to balance it out with some of the most insightful writing in TV history. There may still be a decent gag or episode every once in a while, but there is general agreement that it is a shadow of its former self.

But nothing can take away the brilliance of those glory years. Truly, theirs was a butt that wouldn’t quit. They don’t teach Leonardo Da Vinci’s rubbish paintings, they teach Mona Lisa and The Last Supper. They teach of Gandhi‘s peaceful protests, but not that he wrote extensively about his dislike of the black population and slept naked with young girls. When we listen to The Beatles, we forget that John Lennon was a self-confessed wife beater.

When Lisa Simpson discovered that town founder Jebediah Springfield was a fraud, she elected not to tell the people the truth. She instead remarked how “the myth of Jebediah has brought out the best in everyone”.  To that end, no-one will remember the pale mediocrity of The Simpsons latter years, even if those years now greatly outnumber the golden period.

We feel like it is frequently taken for granted. It was so good so consistently, but followed by numerous turgid seasons. Because of this, we often still feel like a lot of people haven’t fully considered its place in culture. If you haven’t seen them in a while, go back and watch The Simpsons from the start, in order. Don’t risk getting bad episodes on TV. Stop at about Season 9 (after that it’s just one crushing defeat after another until you just wish Flanders was dead) and tell us that in the coming century, it won’t be used to articulate the times in which we live.

No Homer’s Club is at Constellations on April 17. But, then, what’s the point in going out? You’re just going to wind up back home anyway.