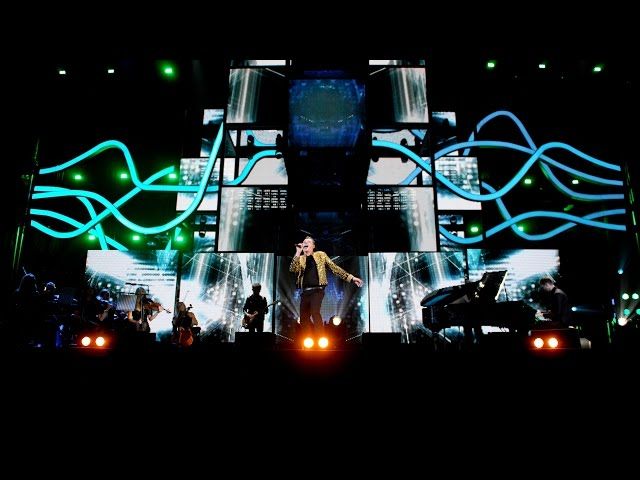 In light of BBC Music’s latest vainglorious efforts to keep Chris Evans in a job, Getintothis’ Shaun Ponsonby gives us the lowdown on the BBC Music Awards.

You know what we don’t have enough of? Big, gaudy self-fellating award shows.

So, imagine our delight when the BBC announced the BBC Music Awards, part of their BBC Music strand in which they lazily slapped a BBC Music logo in front of already existing programmes such as Never Mind The Buzzcocks, which is about music in the same way that The Blues Brothers is about an orphanage (it isn’t, it’s just used as a device to get us to James Brown and the car chase).

As good as the BBC’s music broadcasting can be – and it can be, despite its detractors, compare the BBC’s music output to other major broadcasters – there appears to have been some missteps in 2014.

The launch of BBC Music featured a horrible attempt at repeating history not worth repeating. The all-star version of God Only Knows fell flat on its arse, even by the standards of 1997’s Perfect Day.

Except, where Perfect Day was released because people who didn‘t own a copy of Lou Reed‘s Transformer thought it was good, God Only Knows was a planned single all along. That meant more chart fodder and less attempt to include surprising artists, and it came across as a lot more self-conscious. It only reached #20 in the charts, maybe because everyone saw through it. It was the BBC yelling “LOOK HOW DIVERSE WE ARE!” without actually showing us how diverse they are.

But they can be diverse when they want to be. They can be surprising. You just have to look for it. Last week, Lauren Laverne interviewed Nigerian electro-funk pioneer William Onyeabor. It was his first ever radio interview. Even when You Need To Hear This made the excellent Fantastic Man documentary about him, he refused to talk to them. This was a major, surprising coup, and you would be unlikely to get it anywhere else.

The Onyeabor interview was spread out over a few days. A few hours after its broadcast on Thursday on 6 Music, the BBC Music Awards began. And it was straight back into God Only Knows territory.

In fairness to the BBC, they are in a no-win situation. Sometimes it feels like they try to please everybody, but end up pleasing nobody. This show is probably trying to rival the cringefest that is the BRIT Awards, but also attempting to be more credible. But how credible can you be when you’ve got two former X Factor contestants on the bill? Their faces might be full of their cake, as they just couldn’t help but eat it.

Nothing else could signify this intent like the band who opened the show. As soon as the awards were announced, it was obvious which band would capture the essence of the BBC Music Awards: Coldplay.

Chris Martin began singing backstage, where we saw all manner of stars who have been lined up to perform such as; him, her, who?, that. There were some you don’t usually see at these affairs, but the screams that greeted Matt Goss from One Direction tells you the kind of audience the event has courted (N.B. we are aware Matt Goss was in Bros. It was a joke. Don’t threaten to murder our families over this, 1D fans).

Well this is just going from strength to strength, isn’t it?

Cotton, whilst apparently paying tribute to Harry Enfield’s Tim Nice But Dim character (yet again), proceeded to read out a list of the “amazing live performances” we have to look forward to including; Ella Henderson (bor-ing), Take That (bor-ing), George Ezra (bor-ing), Ellie Goulding (bor-ing), John Newman (bor-ing) and, the most important black man in British music according to a BBC poll; Ed Sheeran (so boring that John Giddings of the Isle of Wight Festival publicly used him as an example of the most boring type of festival headliner).

The fact that Sheeran gets so much exposure these days says a lot about how many people feel about “serious” music. It seems some mix up “quality” with “dull”. They talk about people like Ed as if he’s a great artist. He’s competent, sure. But being sullen doesn’t mean you’re one of the greats. In fact, if art is supposed to inspire, Ed is the opposite. He inspires us to sit around in our underwear, scratching our private parts and moping.

Coincidentally, in an act that definitely didn’t reek of nepotism, there were also two performers from prime time BBC One talent show The Voice; Sir Tom Jones and William (we refuse to call him will.i.am, it’s stupid).

Oh, but Cotton forgot to mention someone! “Five lads causing a storm the world over”. Oh! Who could it be? Deer Tick? Five Finger Death Punch? The University of Nottingham’s 5 a-side football team?

No, its One Direction. You prick tease, Cotton!

Before the next performance, they completely Ron Jeremy-ied themselves in the form of a piece of film with almost as much propaganda as Triumph of the Will. A range of people talked at length about how great the Beeb is for having so much live music, without once mentioning that the reason for this is that they are legally obliged to do so. Although, randomly including Billy Idol as one of the talking heads during this segment awash with young chart fodder was jarringly hilarious!

It took half an hour for an award to be presented. Let’s put that into context – you could have watched a full episode of Seinfeld and a Bugs Bunny cartoon and still have had time to empty your bowels at a leisurely pace before an award was given out.

The award in question was “Best International Artist”. Following Fearne’s reading out of the nominees, there was an embarrassing moment when Evans went into the crowd to find someone to present the award, as if they just couldn’t be arsed to book someone in advance.

Then there was an odd pre-recorded sketch where Radio 1’s Greg James pretended to be Taylor Swift, Ed Sheeran, Nicki Minaj and whatshername that sings All About That Bass in what we can only assume was an overdue tribute to David Lee Roth’s Just a Gigolo video from the 80s.

“That was brilliant,” Chris Evans bullshitted through gritted teeth after it was over.

The much-hyped 1D performance followed. Like all of the performers, there was a short film showed before they took to the stage, but this one actually angered us a little bit.

Mick Fleetwood lost a billion dignity points by comparing them to The Beatles. Jools Holland said that they are making the whole nation proud, as opposed to indifferent or even ashamed. They did that classic X Factor trick of implying that quality and success go hand-in-hand. One phrase to counter that idea: Disco Duck.

Then, there they were! Devoid of personality, covered in tattoos, shaggy hair and looking tired and hungry. It looked like open mic night at Alcatraz.

They weren’t given an award, but screaming fangirls are the only people who care about awards. Ergo, possibly fearing the inevitable threats that go with not getting down on all fours and being royally shagged by the them, they were given a plaque that stated that their first four albums had debuted at #1 in the US. It was kind of cheap looking actually. They ripped out a page from Billboard Magazine, put the CD covers in there and stuck it in a frame I’m assuming they picked up at the pound shop ten minutes before they went on air.

In fact, it took another half an hour for another actual award to be given out. Both that one (“Song of the Year”) and the previous “Best International Male” went to Pharrell Williams, who didn’t care enough to show up.

It was all topped off with Sir Tom Jones and Paloma Faith singing God Only Knows, because God only knows they haven’t defecated over that mini-masterpiece enough this year.

All in all, it was an odd event. Technically, it was OK to have it be called the “BBC Music Awards” (plural) as they did give out more than one award. But four in two hours? Most of the show was just live acts. Which is fine, but they were so boring. If you want to just get a bunch of people to perform, do that. Just don’t call it an awards show if that clearly isn’t the purpose. It’s like calling Shandy an alcoholic drink. Sure, technically there’s alcohol in it, but if kids can buy it, then it’s not really an alcoholic drink.

There was no eclecticism. They didn’t celebrate or push diversity in the way that the BBC claim to be doing. Sure, there was a rapper, but it was the star of one of their major programmes. There were only one or two actual bands who performed. Why does rock music get so sidelined these days?

It feels like they were trying to create a bridge between something like the BRITS and something like the Mercury Prize. And it was awful. It doesn’t work. Some of these acts are not appreciated by the same audiences, so it all ends up feeling a bit weird and disjointed.

But the worst, cardinal sin was that it was dull. Just bloody dull. At the very least, the BRITS are enjoyably bad. There is an overblown air of desperation about it that makes it weirdly compelling. This was far too slick to enjoy even on that level.