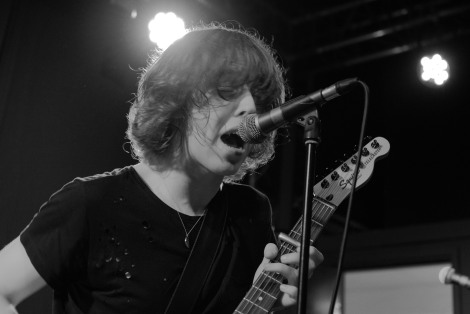 Catfish and The Bottlemen treat their growing army of fans to a raucous evening at East Village, Getintothis’ Harry Sheriff laps it up.

Catfish & the Bottlemen returned to Liverpool and were pleasantly surprised that their army has grown in such a short space of time.
“That’s the first time we’ve had a chant!” shouts front man Van McCann at a sold out East Village Arts Club.
It’s the first night of a six-date UK headline tour and it’s going to be hard to top. It feels like a laid back night but the crowd go up a few gears when favourites Rango, Pacifier and Homesick kick in.
The Llandudno four piece were in the studio with Jim Abiss (Arctic Monkeys and Bombay Bicycle Club) to record their much anticipated debut album so it’s a perfect gig to preview some new material, including Kathleen.
New tracks are sounding promising especially the huge-sounding Machu Picchu, even if it does share the same title as a damn good Strokes song.
The Bottlemen have been touring tirelessly up and down the country the last couple of years to get their songs heard by as many people as possible and the work is finally paying dividend.
They’re a band that deserves the inevitable ascent. After the gig, in trademark fashion the lads hang out with the audience, only this time there’s a long orderly queue for autographs and photo ops. They’re as real and as down to earth as musicians can get, which is refreshing.
With the album pencilled in for September and Communion behind them anything could happen in 2015. They’re going to be *big*; it’s just a case of how big and how soon.

Van McCann of Catfish and the Bottleman salutes the crowd at East Village Arts Club, Liverpool