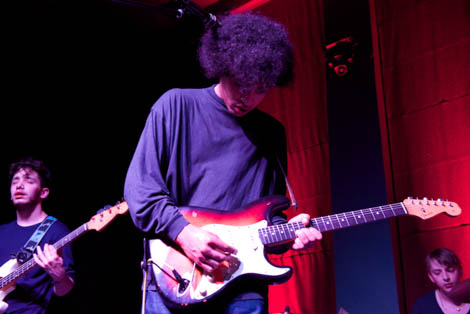 Childhood combine the swagger of classic UK guitar pop but reinvigorate it with the joy of the now, Getintothis’ Luke Traynor finds three new outfits to firmly keep an ear on.

I’m sat on a sofa at the back of Liverpool’s Leaf enjoying a solitary beer when two young musicians emerge from the back, stand rigidly still, and survey the crowd in front, waiting their arrival.
They have a look of expectation and ambition, without any semblance of trepidation.
The taller, all Hendrix-like Afro and retro black shirt, strides alongside his slighter T-shirted pal through the bodies to the stage and with a striking lack of ado, simply announce to the throng: “We’re Childhood.”
Within seconds this five-piece launch straight into their early career chef d’oeuvre – Blue Velvet – a quite brilliant ethereal swathe of dreamy guitars that wouldn’t sound out of place on the Stone Roses debut LP.
Quite a claim that, but then it’s quite a tune.
The Roses comparisons are easy to draw with singer Ben Romans-Hopcraft (he with the Afro) and guitarist Leo Dobson‘s psychedelic, serpentine-like melodic lines flinging us back to the good-‘ole early 90s.
But no sooner are those Brown–Squire parallels fixed, then some distinctly Jimi Goodwin-type Doves yearning lilts emerge, and still later the choppy and untidy earnestness of Echo and the Bunnymen.
Romans-Hopcraft has an unschooled magnetism, the American studies Nottingham University student rolling his eyes back into their sockets like some kind of blissed out crack head, zoning out in happy ecstasy to his mates’ melancholy shoegaze.
He shows off a delicate slightly off-key falsetto line while Haltija drifts along on a high cirrus cloud (the white cotton wool stuff) with its reverb underlying guitar reminding of classic Cocteau Twins.
Bond Girls, B-side to single Blue Velvet, is underpinned by a soaring guitar line and, looking around the room, the appreciative bloke rhythmic nod is sign enough these Londoners deserve their place alongside Wolf Alice, Swim Deep and other darlings of the music press. 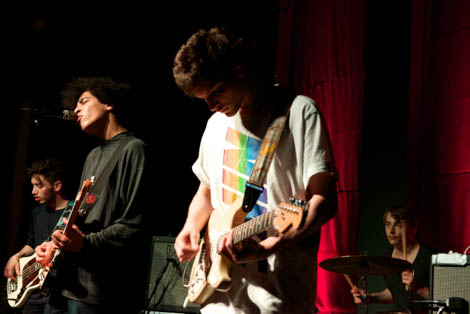 Childhood live at Leaf Tea Shop
Childhood don’t have much chat, but they let their tunes do the talking, and end the night with the anthemic Solemn Skies, their second single.
It’s another delightful dollop of Roses dance-infused uplifting guitar pop, which flits among the summer breeze, taking you back to a Saturday morning when you wake up and realise you’ve taken the Monday off and it’s another 72 hours before the thudding drone of the alarm clock will pollute your ears.
Before these great hopes for the UK-based guitar scene are Moats, recent NME champions, having scooped the mag’s prize to play at the Austin City Limits Festival alongside Eminem, Outkast and Pearl Jam.
A four-piece from Biggleswade, Bedfordshire, and/or Liverpool, depending on who you side with, their lead singer may have a wispy boy-like swept fringe under his beanie hat, and twiglet legs of a 15-year-old, but he has a voice to envy, packed with strained wailed yearning and gruff animalistic growls that harks back to Jeff Buckley.
It’s kind of beautiful and raw at the same time, and indeed, Matt Duncan does confide in us that his hero is the Hallelujah genius, suddenly ensuring Moats’ output makes more sense. Indeed, Duncan even has a song entitled ‘I Want To Be Jeff Buckley, just in case were still unsure. 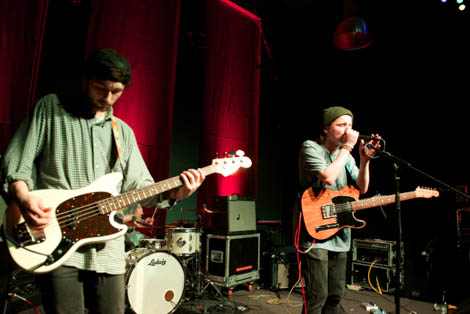 Moats live at Leaf Tea Shop
Absorb shows off their delicate soundscapes and their version of the Grease musical’s You’re The One That I Want, purposefully less pop than anything Travolta or Newton-John would ever contemplate, marks them out as a band to watch.
Taking their name from a street sign at the end of a local road, Hooton Tennis Club (actually in Little Sutton, Ellesmere Port) are delighted to open the evening, having nabbed their most credible gig slot so far, supporting Childhood.
Part of the Edge Hill ‘not-for-profit’ Label Recordings, Callum, Ryan, Harry and James, all 24, deliver no-nonsense DIY heavy guitar rock, with spoken slacker-type vocals, that hark back to Pavement and Sonic Youth. 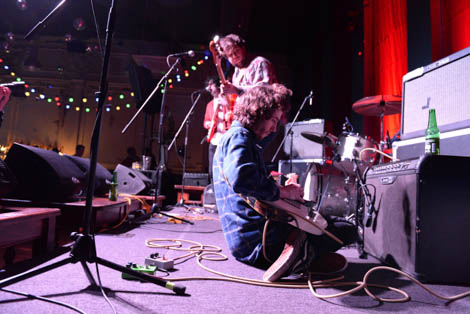 Hooton Tennis Club live at Leaf Tea Shop
But the hooks are easy to hang your coat on, with tripping guitar grooves and the stand-out loveliness of Kathleen Sat On The Arm Of Her Favourite Armchair, a self-confessed ode to the band travelling through Europe and blimping the female talent in each city.
Hooton are akin to Perfume, one of Steve Lamacq‘s staples of from the mid to late 90s – which is no bad thing. After the gig, of 150 minutes of music, all three bands shake hands, enjoy a beer and discuss music. It’s great these young lads still have fire in their bellies.