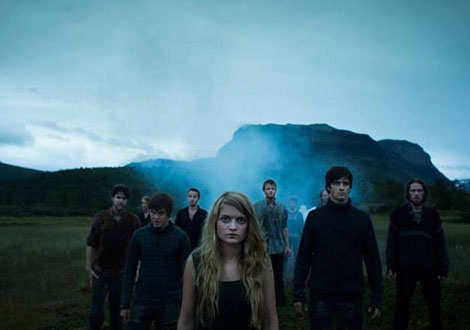 This week sees the launch of LIPA’s annual festival, The 2ube Extra, where final year music students showcase their talent (or lack of) in the very nucleus of the institute, The Paul McCartney Auditorium, Getintothis’ Emma Walsh takes a peak behind the curtain.

LIPA’s 2ube end of year showcase is a stellar occasion. Sadly, as a student-only event there is something very insular, even parochial, about the nature of the festival.
Held early in the evening and closed to the general public (unless you receive an invite) it often feels more like an under-attended school nativity than what it actually is – a live platform featuring some of the most talented musicians and exciting acts that have graced this city’s stages. It has a cosmopolitan, sometimes exotic feel, blending Liverpool talent with students that have studied here and will make Liverpool their new home.
You only have to look as far as this year’s GIT Award nominees to look for the evidence – All We Are, Dan Croll and Ninetails all cut their musical teeth within LIPA‘s walls. The Institute has poured musicians and tech students out into Liverpool’s gigging scene for years, weaving a weighty and diverse thread into an already prolific local heritage.
It seems absurd to me that these students, having become such a large part of the local musical landscape, play the culminative gig of their student career behind closed doors, cut off from the rest of the city.
If you’re down with the kids and hooked up to the world wide webisphere you can see a live stream here.

If not, never fear, the cream of the crop are always floating around one or another of the city’s stages, so here’s the names you’ll want to remember from the Class of 2014.
UNKNWN
Not your average guy with guitar or girl with backing singers, UNKNWN are a producing duo who’ve already found favour with Annie Mac. Fresh from the SXSW festival in Texas, Belfast’s Chris Hanna and Dublin songstress Gemma Dunleavy create a sound I find hard to articulate using words but could express quite perfectly through the mode of interpretive dance in some strobe filled tent come the early hours at a festival.
Tunes to check out include Tucker and an incredible remix of Soak’s Sea Creatures that turns a beautifully simple, inoffensive folk song into something dark, deep and dub.

Singapore Strategy
Claiming And So I Watch You From Afar (if you don’t know the name you’ve got a treat coming your way at Sound City this year) and Biffy Clyro as two of their influences, Singapore Strategy are a post rock instrumental trio offering another alternative to the usual singer/songwriter format at this year’s festival.
Taking on the lengthy song titles (and token ‘WOO’s) of ASIWYFA, Build Me An Unsinkable Ship And We’ll Sail The World and the tasty little Synth Pop are two Singapore Strategy songs you’ll need to hear.

Mutant Vinyl
The “alter ego” of singer-songwriter and multi instrumentalist, Edwin Pope, there’s been a lot of hype surrounding Mutant Vinyl recently.
His latest offering Lavender being hotly tipped by people in the know, apparently, but it’s all a little too bad 80s for me. Yeah it’s got sax but it’s no Baker Street. If a jazz/dub/trip-hop combo is your perfect meal deal, get on this guy.

Ronny Chu
I am seriously excited about this South Korean singer/songwriter/rapper. Ronny Chu takes sprinklings of rnb, rap and folks, throws it skyward, and makes some tasty tracks, not least the beautiful Golden Rivers. While Tell Me Your Name is perhaps a little simple in sentiment, the vocal magic of this track will give you goosebumps.
Wait for the breakdown. But if you want to see what this girl is really capable of, check out her cover of South Korean boyband Exo‘s song Growl, you don’t have to speak the language to know that this is something special.

Tiz McNamara
This guy is completely my cup of tea. Heartwarming acoustic folk with just the gentlest touch of poetic Irish melancholy, all rough around the edges with a boxy beat and an occasional raspy roar.
Cut from the same cloth as Damien Rice or Ben Howard, McNamara has the poetic potential to break your heart, check out the Hold On EP released April 1st, but in the meantime, Falling Asleep and April Fool should whet the appetite.

Collectors Club
Good old fashioned radio-friendly pop, just add the adoration of a fleet of teenyboppers and Collectors Club will be unstoppable. With sunshiney riffs and melodic boyish vocals, Collectors Club have a vibe very much ‘in’ at the minute.
Wanna Be You and First to Know should give you a good taster.

Kalandra
With Nordic and Celtic influences, dark themes and heavy arrangements, Kalandra are certainly representing the strong Norwegian presence at LIPA.
It’s their second year to grace the 2ube Extra stage, but since last year’s festival they’ve released their debut single Sell Your Voice, very Cranberries in places, and well worth a listen.

Highfields
Another old hand at the 2ube Extra, Highfields were among the top contenders at last year’s festival, enjoying a packed out auditorium on the final night. These guys are just super happy, pure unadulterated fun with an international flair. Think East Coast America sunshine beaming over traditional aran jumper folk.
These guys can guarantee the most polished, tight performance of the festival. If you aren’t already humming The Chase (Oh Lord!) while washing the dishes or walking to the bus stop, enlighten yourself immediately.

Nadine Carina
If you haven’t heard the name Nadine Carina being bandied about the city in the last 18 months it’s safe to assume you’ve gone temporarily deaf. This electronic folk songstress hails from Switzerland but has been warmly welcomed into the Liverpool fold with open arms.
There’s a childlike quality to her sound, unsurprising from the toy instruments she favours, that flirts dangerously between the sweet and the downright creepy, but it’s undeniably brilliant. Check out Storm/Calm and Tangerine.
She was also shortlisted on the GIT Award 2013. Sweet.