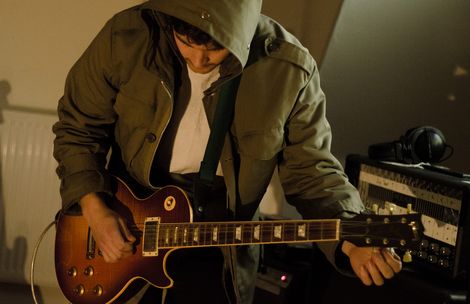 Yarbo lead a cast of intimate and diverse songwriters in the contrasting setting of Korova’s dungeon, Getintothis’ Emma Walsh finds much to cherish.

The dark, dark cellar where Korova now lives was apparently modelled on the stripped down basement venue featured in every edgy 90s American teen drama, you know the kind that have Chris Isaak’s Wicked Game playing in the background.
Incidentally, that’s exactly what opening act Spirit Bear happened to be strumming out on his guitar as we arrived. And that is all we have to say about that.
Next up, Tiz McNamara who has gone from strength to strength within the LIPA bubble since he timidly took to the stage over a year ago with guitar in hand – unusual enough for a drummer.
Now kitted out with a full band and respectable catalogue of songs, Tiz is starting to look like a real contender on the Liverpool music scene.
There is a rawness to Tiz’s voice, and a simple honesty in his songwriting undoubtedly drawn from youth but to to call it endearing seems patronising.
He may be fresh faced but with gems like Steady As You Go in his songbook the potential is blinding.
With the weight of the band behind him, Tiz seems more sure of himself on stage.
His folky sound is sharper, there is more of a kick behind his heart-on-his-sleeve lyrics, and it was great to hear his softly softly Irish brogue give way to an all out bellow during Hold On. Very much one to watch for the ‘Ones To Watch’ lists of the future.
Demonstrating the credentials required of such lists was Jonathan Roberts, currently featured in the GIT Ones to Watch for 2014.
You may know Jonathan Roberts from such musical outfits as Manukah or Jazzhands, but don’t worry as his current venture is about as far from Jazzhands as you can possibly get.
His performance was balaclava free and thankfully fully clothed. Considering the grimy venue, Roberts’ instrumental mastery on the keys was a complete contradiction to his surroundings but was, regardless, nothing short of beautiful, haunting even.
It would have been much more at home in the drawing room of a Jane Austen novel but that perhaps makes it even more spellbounding. Admittedly a short set, Roberts promises there will be more of the same coming in a grungy venue near you.
Wrapping up a rather eclectic evening with a helping of good old fashioned, warms the cockles of your heart acoustic goodness, Yarbo and band brought proceedings to a folky climax.
In an idiom, Yarbo is just our cup of tea, with rich acoustic vibes, foot tappingly good rhythms and the added wealth of violin to boot.
Mechanical has shades of pre-Mumford and Sons folk, with honest to god songwriting and goose-pimpling harmonies with the lovely Laura James.
It seems singer-songwriters come ten a penny these days but Yarbo is not to be washed over with songs like What Is Now and The Devil and a Dark Place. Let’s hope he’s a strong swimmer.
Further reading on Getintothis: