The latest in Post Music‘s 80 pence-a-show saw Italian psychodelic math-thrash brutes Zeus! evoke the chikhai bardo in the usually serene surroundings of mid-week Mello Mello.
Coming at the end of an exceptionally busy European tour, you might forgive the band for taking it easy, but Zeus! don their by now tattered kotinos and from the off dare all assembled to avoid getting sucked into the infectious maelstrom emanating from the tiny Mello stage.
It’s a good job they’re just a duo, any more members and intensity would probably lead to councillors bearing Cumulative Impact Policy manacles. Luca Cavina, a half naked Bolognian bass Olympian leads the charge with a befittingly complex yet funky attack. 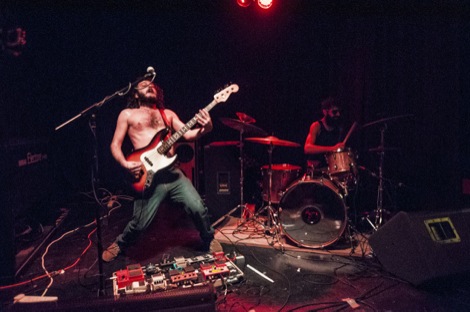 Zeus! live at Mello Mello
He presents a kaleidoscope of rhythm, that’s still welcoming, and not too clever to put off the dancers at the front. It’s just on the tasteful side of fuzzy avant metal and you can’t help be astonished at his playing.
Although at first difficult to identify through the Appalachian beard, diner vest, and Ray-Bans, it was nice to see drummer Paolo Mongardi from psych-pop favourites Jennifer Gentle, who we recall playing to a grand total of five people in the old Masque attic a few years ago.
His drumming tonight though is as far from the pastoral whimsies of his previous band as one can imagine; an intense, yet perfectly synched expression of skill and poise. These guys have perfect complementarity and at no point does it sound as if their music will be overwhelmed by any aggressive distortion.
Zeus!‘s recent album Opera (released in late 2013) is the gentlest thrash record Getintothis has heard, it’s a purposive and directed set of songs, and its this album that they mostly draw from tonight.
Songs last, at most, two or three minutes and Zeus! don’t hang around; a few indeterminate words and they’re off again – its totally over the top, occasionally preposterous, and sometimes difficult to tell whether they’re entirely serious, but any band who can pun a song title on one of the 20th century minimalist greats La Monte Young, are total winners. 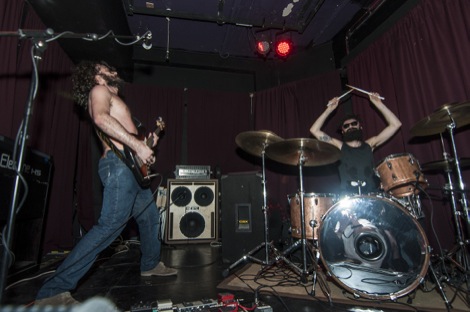 Zeus! live at Mello Mello
Considering the restrictions of their bass-drum-screams-with-occasional-samples-set, you can forgive Zeus! for lacking variation in their sound, and unless a radical change in direction is afoot, its difficult to know where they can take this sound next.
Considering their apparent affection for Italian improviser Giorgio Gaslini (“Giorgio Gaslini is our Tom Araya“) then we’re hoping for a classic metal take on mid period Sun Ra. 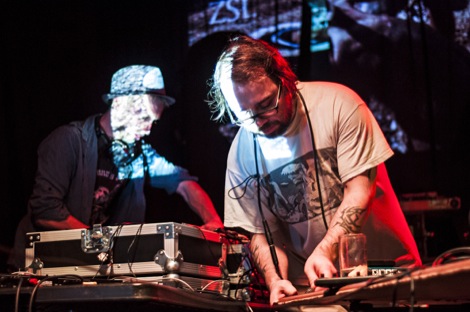 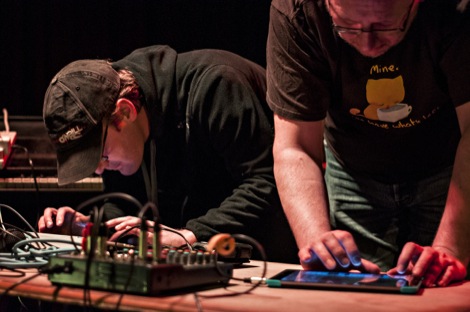 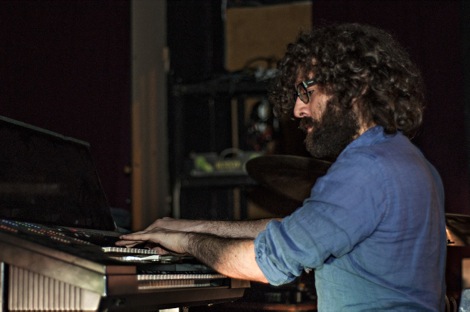 Jacques Malchance live at Mello Mello
Earlier, a nice selection of Aardvark-related zoological films was disturbed by a messy improvised sound track that unfortunately induced flashbacks to 1000 interminable art gallery musical installations.
Similarly, it was difficult not to feel slightly disappointed by Jacques Malchance; his billed Organ Works, which he has performed successfully several times in the past, sounding tonight like a slow afternoon at a community centre tea dance.
Pictures by Getintothis’ Michael Kirkham
Further reading on Getintothis
Getintothis examines Liverpool’s love affair with disused spaces for gigs.
Getintothis on the 37 new Merseyside music artists you need to know in 2014.
The Warlocks and Mugstar to play Kazimier in 2014.
Introducing! Great new music from Abe.