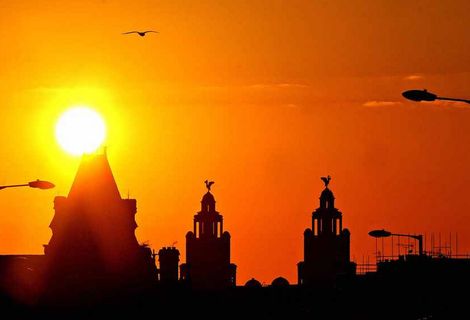 Liverpool’s gig schedule for the first half 2014 throws up some fantastic shows, Getintothis’ Joseph Viney compiles the best of what’s on offer.

Well, well, well…looks like we’re back where we started!
No sooner has 2013 left us than 2014 barges in; uninvited but inevitable.
With that, a plethora of cracking shows that proves the city’s artists and promoters deign to rest on their laurels after the peaks and troughs of the last 12 months.
It’s a veritable feast of superb acts that will be decamping on our collective doorsteps. Luckily, Getintothis’ Joseph Viney has brought together the pick of the gigs spanning the next few months.
We also have a Spotify playlist available at the bottom of the guide.

The Neighbourhood BBQ series relaunches in January for a monthly installment of themed block party events, combining Camp & Furnace’s Foodslam with a collection of exciting live music acts.
Dropping in will be The Fire Beneath The Sea, Charlotte Ashdown and many more.
Details.

Detroit’s Terence Parker pops in to Kitchen Street’s pop-up venue for the Shake a Leg night to launch his new LP Life On The Back 9.
Details.

Championed early and frequently by Getintothis, Esco starts 2014 in typically brazen style with a show guaranteed to bring the house down.
Support comes from Mic Lowry and the night will showcase the best of the newest emerging talent.
Details.

Soul legend Bobby Womack heads to our fair city and to the cosy and historical confines of the Philharmonic Hall.
Womack has always been chipping away in his own inimitable fashion, and the fruits of his labours will be plain for all to see.
Details.
INKARTA (with Shigeto & Dauwd) at the Kazimier – Thursday January 30
The Kazimier are presenting their first ever club night, showcasing some of the best live acts and DJs in the electronic-field and bringing artists from around the world to create a captivating and immersive experience, laced with tailored set designs and visual stimuli.
Details.

What more can be said about either group?
Foals have quickly and strongly positioned themselves as one of Britain’s most popular and interesting propositions, while Liverpool’s Outfit have ascended sharply with the release of their corking debut album Performance.
An early nod for gig of the year is on the cards here.
Details.

Credited as one of the leading lights in the math-rock club, Tera Melos paradoxically bring forth musical acrobatics allied to a thin pop edge. Chaos will ensue.
Details.

A blistering set at last summer’s FestEVOL showed a newly-adoring audience that Young Fathers are set for a memorable 2014. Get there before they become a very well-known secret.
Details.

A strong showing at Liverpool Sound City 2013 proved that London Grammar are more than their singer being, as Radio 1 so clumsily put it, “fit”.
Details.

Beginning a highly ambitious and incredibly exciting program for 2014, Fiesta Bombarda invite you to their first carnival of the year, hosted in Liverpool’s iconic Sefton Park Palm House.
Headlining the night will be the exhilarating Renegade Brass Band; a 12-piece jazz hip hop ensemble that never fail to entertain audiences with their big band shenanigans.
Details.

Dust off your red baseball cap, squeeze into those cargo shorts once more and relive some of your awful youth via Fred Durst and his nu-metal cronies.
What can you expect? Lurid rapping, some riffing and no doubt a puzzling attendance demographic. Go ‘ead, you know you want to.
In the meantime, check out Durst’s mad guitar skills below…
Details.

The sultry Ms. le Bon returns to Liverpool and Leaf Tea Shop.
In addition to her own career le Bon has been a featured vocalist on Gruff Rhys’s Neon Neon project.
Her musical wares are at once playful, ethereal, fun and mysterious. How could you possibly refuse?
Details.

Mikill Pane has a nice habit of making the mundane and serious a little more fun than it should be. His infectious tunes and odd outlook on life will have those in attendance bouncing.
Details.

Young and energetic enough to make even twenty-somethings jealous, The Strypes are riding the crest of a wave from the rehearsal room and into your frontal lobe.
Already providing great live performances, 2014 is the year they may well mature into something big.
Details.

Warpaint are aptly-named; their music floats in around the senses like a ghostly marching army.
Back on the trail after their first flourishes of public recognition, the quartet will have their blood up and be ready to do battle.
Details.

Seemingly around forever now, the Presidents retain a major following thanks to a number of certified smash songs.
Peaches, Lump, Kitty, Bo Weevil and many more will be dusted down and ground out by this rather unhinged trio.
Details.

Penguin Cafe’s music has infiltrated daily life from films like Napoleon Dynamite to countless theme tunes.
It is a sound that relies on the eccentricity of both audience and performer.
Your invite to this weird and wonderful world awaits.
Details.

The beautiful Foxes heads to EVAC on the back of a promising 2013.
Her tunes evoke memories, youth and everything on the spectrum with a smokey, pop tinge. One not to miss.
Details.

Paper Aeroplanes have a little more substance and consistency than their schoolyard-favourite namesake, they bring impressively fine melodies, gentle melancholia and the occasional burst of jaunty pop to the Kazimier.
Details.

Eagulls have made a clear flight-path for themselves thanks to some impressive Liverpool outings last year and they should feather a nice nest for themselves with this show in February.
Hopefully we will have come up with some more aviary-based puns by then too.

Toy brought their swirling repetition and krautrock mores to Sound City 2013, and this traditions looks set to continue at EVAC.
Details.

Ezra was featured on the BBC Sound of 2014 list, and no doubt he will find this year both an interesting and challenging one.
His echo-laden, serene music is perfectly matched to Leaf’s confines and tastes. About time you saw what the hype was about, huh?
Details.

The ska legends return to Liverpool after a support slot with PiL last year. Prepare for social and political commentary mixed with inescapably bouncy tunes as they celebrate their 35th anniversary.
Details.

Another member of the Sound of 2014 club, Singh’s music presents a nice challenge to the listener, with many layers to unwrap.
Eliza & The Bear offer support and look to build on what they have established already.
Details.

Led by Fat Mike of NOFX fame, Me First… present something of a punk cabaret act with fast-paced covers of all manner of songs, popular or otherwise.
Details.

Punk and new wave stalwarts The Stranglers celebrate their 40th anniversary with another tour.
They haven’t lost any of the energy or confrontation that made them a success in the first place, even if original drummer Jet Black has to wear an oxygen mask on stage…
Details.

Metal warriors Crowbar come to Liverpool on a mission to wreak destruction and havoc.
They feature Rex Brown on bass, formerly of Pantera and Down, so expect some fine pedigree on display.
Details.

With a new album, Too Much Information, due imminently, north east’s finest are back on the road.
Infused with literary pretensions and an ear for a fine blend of rock and pop, Maximo Park are set to be here for a long while yet.
Details.

Age doesn’t appear to be a problem for this certified dub and reggae hero, as his showing at Eric’s last year and his recent collaboration with Forest Swords show.
Everybody will want a piece of this one so get your house in order early.
Details.

Liverpool is the first stop on a tour in support of new album Love Letters.
Details.

The north London boys get on their bikes for their first UK headline tour in two years. A new album and single have been released so it’s time familiarise yourself once again.
Details.
Kathryn Williams at Leaf – Wednesday March 19
This captivating performer will fully inhabit Leaf and hypnotise those in attendance; her lush songs setting a calming and curious tone.
Details.

The latest project from ex-Suede guitarist Bernard Butler and Jackie McKeown, Trans create mesmeric psych/Krautrock inspired grooves described as the sound of Television crossed with Neu! and a bit of the Velvets thrown in.
Details.
Dan Croll at the Kazimier – Friday March 28
Old Danny boy has had something of an eventful year, culminating in his music being selected to be a part of FIFA ’14 and Grand Theft Auto V.
With a new album on the way and popularity, 2014 could be the year Croll makes a big mark.
Details.

Legendary DJ duo The Orb hit Liverpool with the promise of a crammed, sweaty and thud-laden night ahead.
Details.

The home-grown success of Radstock Festival returns for a second year. Some of the acts already confirmed include Funeral For A Friend, Kids In Glass Houses and Hacktivist.
Details.

Jamaican rhythms aided by trumpet, violin, accordion and a whole host of other sounds, Molotov Jukebox do to your brain exactly what you would expect.
Details.

BSP had two strong showings in Liverpool during 2013, firstly at Liverpool Calling before a well-received support slot with Editors.
Always providing more than meets the eye, BSP look to continue mining the rich seam of extreme talent they possess.
Details.

The willfully wicked and groovy King Khan brings his band of loyal subject to the Korova in April, for what should be one of the most entertaining shows of 2014.
Bow down, mortals!
Details.

The annual bonanza returns and promises even more than the fantastic 2013 showcase.
Details.

Japanese noise-terrorists Bo Ningen will be keen to unleash even more mayhem on a city that has come to adore our weird friends from the Far East.
Details.

Bramwell, leader of cult indie types I Am Kloot, is striking out on his own in a series of shows that guarantee good times, intimacy and a chance to see a genuine man of craft do what he does best.
Details.

The slicked-back, effortless ease upon which White Denim base their brand of skewed sunny guitar pop should be seen to be believed.
Most recent LP Corsicana Lemonade is an absolute belter and worthy of your attention.
Details.

Already a major part of not just Liverpool’s but the national music calendar, Liverpool Psych Fest delivers as much as it promises.
Already confirmed for this year’s kaleidoscopic fun-fest are Goat, Teeth Of The Sea, Anthroprophh, Lay Llamas and Gnod.
Details.

We have also compiled a Spotify playlist for you to enjoy, so get listening, subscribe and keep up to date with other Getintothis playlists that will be surfacing over the year.