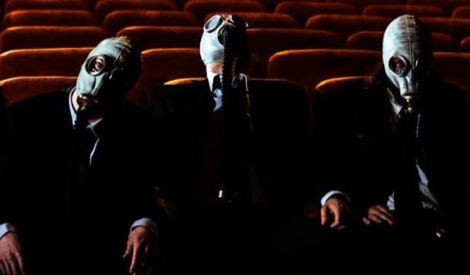 Liverpool’s metal scene continues to divide opinion.
Oceanis, Conan, Iron Witch, Bendal Interlude, Scare Tactics.. now we’re struggling.
With the exception of The Lomax, and sometimes The Zanzibar, the city’s scene is pitifully under represented and lacking a coherent pull or serious flagship bands to warrant further scrutiny from outside these boundaries.
So it’s refreshing when a band like Elephantom drop from nowhere. They’re not the finished article, but their debut single, Parallax, shows colossal potential.
Fusing an assortment of influences from the time signature matrix of Porcupine Tree through to Primus‘ cement-mixer rhythms through to Oceansize‘s subtlety and Iron Maiden‘s classic metal approach, Elephantom are a serious proposition to the Liverpool metal scene.
And their debut accompanying video is as ambitious as it is ridiculous – four trunked up gas mask-sporting be-suited loons ripping hell out of their instruments while their frontman is strewn up and bloodied before the SAS show up with a shitload of guns. Completely ridiculous.
Similarly ridiculous are the band member’s monikers from Danger Al Nolan (vocals), Immaculate Conception (guitar), The Whole Fuckin’ Party (bass), and Poontang Roper (but of course, drums).