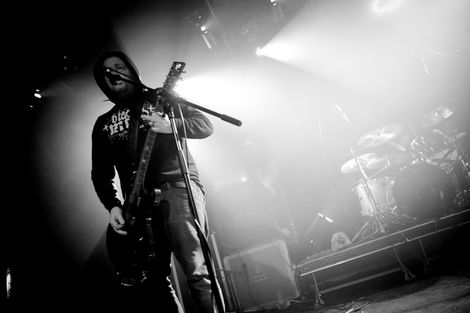 GIT Award nominees Conan plan to smash the Zanzibar to bits in October, as the band’s Jon Davis tells Getintothis’ Peter Guy about his new studio.

Conan are one of those bands you hear before you see.
Like some rampaging horde, the brutal trio have not so much carved a niche out for themselves but forcefully taken what they feel is rightly theirs, salting the earth as they leave and move on.
Now tremble in fear wenches and serfs, because Conan and a horde of their ilk are heading to the Zanzibar courtesy of Deathwave Entertainment and Antipop on Thursday October 3.
With their cavalry consisting of Ninkharsag, Burden of the Noose and Coltsblood, the night promises to be one of the loudest in a long time.
Momentum is on their side, so get down there and pay tribute before you lose your head.
If that weren’t enough, the band’s vocalist/guitarist Jon Davis has enhanced his contribution towards the north west’s music scene with the opening of his new recording studio, Skyhammer Studios.
Boasting state-of-the-art equipment and a strong sense of inclusivity, the studios are another marker on an increasingly well-stocked map.
Getintothis caught up with Jon to get the info on their new base. 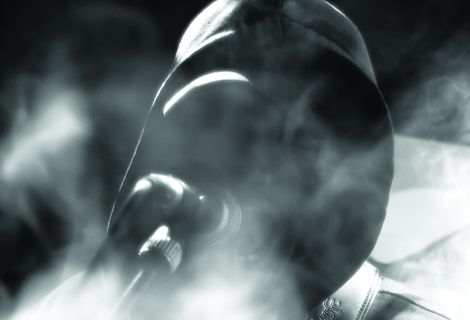 Conan play the Zanzibar on October 3
Getintothis: So, Jon, tell us about the studio.
Jon: The place was a dream of mine when we bought the house back in December 2012.
As soon as we bought it we identified one of the outbuildings (a large two-storey coach house) was perfect for what we needed.
The studio is a residential recording studio based just off junction 5 of the M53. It is more or less equidistant from Liverpool and Chester it provides a custom built recording studio and comfortable residential accommodation, within easy reach of major transport networks.
The studio is run by myself Jon Davis (from 2013 GIT Award nominees Conan) and Chris Fielding (producer for bands including Electric Wizard, Conan, Winterfylleth, Moss, Primordial, Litmus, Napalm Death, Serpent Venom).
All production work carried out in the studio will be by Chris. I am still learning the ropes to be honest but will be picking things up as we go along.
The studio is contained within a two storey 19th century coach house, within a 1/3 acre plot belonging to my wife and I and is just off the Welsh Road near Ellesmere Port.
It provides a comfortable, homely and peaceful environment within which bands / artists can enjoy lush green surroundings and fresh air when not in the studio itself. Once you step into the studio you are greeted with a custom built recording environment, designed and built by award winning recording studio building professionals.
We have paid a lot of attention to detail to make sure that the place looks great and sounds great – no expense has been spared in this respect.
Getintothis: Who have you lined up to record there? Is it geared towards acts of a similar spec to Conan or would it be suitable for all?
Jon: Up to now we have several bands lined up to record. I won’t name all of them but they include Liverpool’s own Coltsblood, Serpent Venom, Bast from London and several others from all over the UK.
The studio is open to bands and artists of any genre.
Chris has worked with choirs, solo artists, all sorts of different people and is definitely not just a ‘heavy metal’ producer.
The studio layout and design is deliberately done so that it appeals to all ages, all styles and anyone is welcome to call in to check it out. 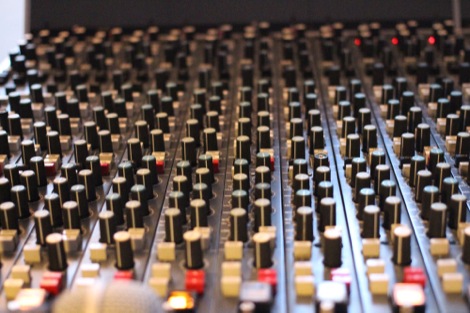 Find this confusing? Let Skyhammer do it for you!
Getintothis: Chris Fielding is helping out with production work, tell us more about him, who he’s worked with and working on.
Jon: Chris Fielding is a producer with vast experience, yet only in his early 30’s.
He has worked on some very successful albums by a wide variety of bands including Winterfylleth, Napalm Death, Electric Wizard, Conan (of course) and Russell Watson.
He has recorded a wide variety of styles. He worked in Foel Studios in Wales for several years after a couple of years in Whitby Studios in Ellesmere Port.
I first met him in Foel Studios in 2009 when we recorded Horseback Battle Hammer and since then we have recorded everything with him.
He’s now a friend through that association and after he moved to London we were all set to record down there with him.
Out of the blue he called me up and explained that he was moving back to Chester (where he is from originally) and would I be interested in him working with me at Skyhammer.
I took about three seconds and decided that it was a great idea. I was going to build up the studio myself over the years and try and learn the ropes as I go along, but I decided that having Chris here as the main producer was an opportunity I couldn’t turn down. So we worked on the details and reached agreement.
We’ve both been involved in the design of the studio and we’re really excited about starting, although Chris will handle the vast majority of the production work. I’m just a rookie, so I’ll take my time and learn what I can when I can.
Getintothis: What tips would you offer a completely new artist/act going into the studio for the first time?
Jon: There are several things I would recommend and firstly it is important to choose the right studio.
I read and hear that people will record somewhere because it is cheap, or close to where they live and it makes me sad.
If you think about your recording as a once in a lifetime opportunity to get those songs you have been rehearsing for years onto an album or a single, do your research and make sure you choose the right place.
Secondly, make sure the songs are finished – spending time writing in the studio will eat into the time spent mixing and tracking the songs.
If you cut down on this time too much then you are in danger of limiting the time spent polishing the songs, which will of course make the final product of a lower quality.
Getintothis: Conan’s music is so dynamic and textured yet so noisy how important is the studio/production to your work – is it almost of an equal to the song?
Jon: The studio is of utmost importance.
You only get one chance to record an album properly and it’s so important to make sure you choose the right studio and the right producer.
You spend months practicing and writing music and then when you have the tracks perfected and exactly how you want them you set it in stone.
Imagine putting all that effort in and then not doing it justice at the end by making the wrong choices.
There are so many bands around now that are competing for the ears and imaginations of the consumer.
People really need to realise that they need to produce the best product as they can as that is how it can be seen by the buying public. Great music will definitely suffer if it isn’t presented properly.
Getintothis: Who’s production work do you guys admire and what albums released in the last 12 months do you rate from a studio point of view?
Aside from Chris Fielding, who gets my vote on all things related to this I would choose Alex Newport, James Plotkin and Matt Richardson at Full Stack Studios in Blackburn is also a good guy.
You can check out anything recorded by Bastard of The Skies, James Plotkin mastered some of our latest work too.
Getintothis: Finally, Conan, where are you guys up to, what’s new since the GIT Award?
Since the awards we went on a tour with Bongripper, then flew out to play in Copenhagen and right now we are writing a new album to be recorded at Skyhammer in September/October time.
This will be released by Napalm Records in spring 2014. The songs are sounding pretty good so far, we’re looking forward to getting into the studio to record them.

Share. Twitter Facebook Google+ Pinterest LinkedIn Tumblr Email
Previous ArticleLiverpool’s gig calendar 2013: Guide to essential gigs not to miss the rest of this year
Next Article Esben And The Witch, Teeth Of The Sea and Thought Forms set for Kazimier triple-header