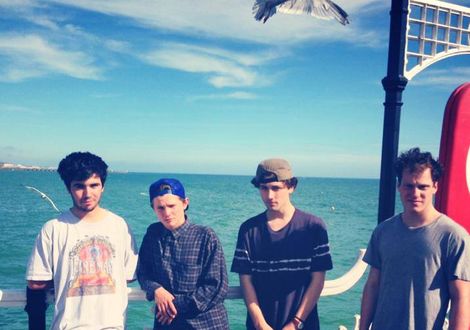 Liverpool’s Moats specialise in messy gigs and marvellous give a fuck attitude, Getintothis’ Laurie Cheeseman hails an outfit that’s part of the healthy crop of new guitar bands offering a delectable alternative to run of the mill riffery.

Selected by NME to play City Limits Festival, Moats are destined to play Austin, Texas in October.
Make of that what you will, however, these chaps are no third wave indie-schlocks playing to a crowd of 20-something lads wishing it was still 2006. Renowned for playing rather unusual spaces (their living room) and royally ripping it up, these chaps have whipped up considerable interest across Liverpool and the momentum is building.
But it’s not all DIY gigs; taking the sound of the mid-2000s (Interpol et al) while re-housing their aesthetics in a more contemporary setting is a thing that most bands of their ilk neglect, opting to just copy their schtick verbatim.
It’s a sign of something altogether more exciting when they, along with a clutch of their Mersey contemporaries, are making the guitar music (whisper it) cool again. That’s right, no more land fill.
Doom-laden heaviness and an overwhelming sense of something sweet that is now lost pervades their music, from Snakepit to Adsorb, the perfect antodote for anyone suffering a nostalgia-induced quarter-life crisis for an indie youth misspent who craves something more exciting than what’s on offer these days.