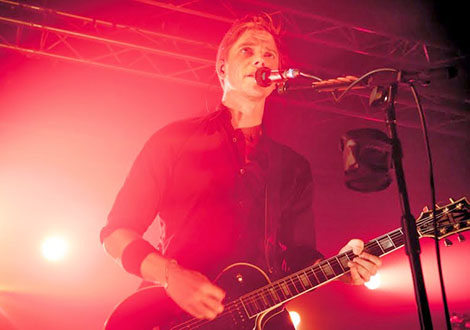 Veterans Interpol deliver a statesmanlike display at O2 Academy, but as Getintothis’ Andy Kelly reports Liverpool’s new kids on the block Circa Waves show their time is now.

It’s the Liverpool leg of one of the most prominent national tours in indie music and a Liverpool band are first to take the stage at the 02.
Yet Circa Waves front man Keiran Shuddall has a confession: “This is our first Liverpool gig“. That plus the opening slot on an NME Awards tour – perversely often given to the band thought most likely to ‘hit it big’ – might be enough to throw some bands, but it never looked likely here.
It’s barely gone 7.20pm and there’s already a decent crowd in to watch a set full of confidence, energy and most importantly catchy pop songs.
Sound-wise it’s impossible to ignore the influence of The Strokes with at least the first half of Good For Me threatening to turn into Last Nite, though it’s a sobering thought for some of us that Shuddall would have been about 13 when that little gem came out.
Their songs are about going out drinking, girls and being young – just as they should be. There is nothing particularly raw here, they’re polished and fully formed already, with many songs having those quirky little endings that Vampire Weekend made popular.
As the gig goes on Getintothis can hear a little bit of Cast in the vocal and the general headlong pop rush occasionally brings to mind The Thrills and late 80s should-have-beens Power of Dreams (look em up).
“I’m a little too young with not enough time” they sing on the excellent Stuck In My Teeth but already shortlisted for the GIT Award 2014 and set to return for Sound City in May, Circa Waves‘ time may be right now.
Next up are Royal Blood. “I’d like to introduce you to the band,” says frontman Mike Kerr, adding swiftly “this is Ben“.
Yes this Brighton outfit are just two in number but close your eyes and you’d never guess. Bassist/vocalist Kerr and drummer Ben Thatcher create a huge rumbling beast of a rock sound, and with enough dynamic hooks to stop it ever getting sludgy.
Perhaps there’s a few too many songs where you expect Kerr to burst into “Fuck you, I won’t do what you tell me” territory but they’ve got songs as well as a sound and Come On Over and Out Of The Black are stand outs among all four bands tonight. We were converted.
Which is not quite how it was with Temples – where such things should probably occur. Last May, during the whirlwind of Liverpool Sound City 2013, Getintothis reviewed Temples’ show at Leaf, though had to be reminded of this as we couldn’t remember anything of the set.
A quick Google and this is what I wrote back then: “My night ended with Temples, a band who look fantastic with a classic rock aesthetic and sound (frontman James Bagshaw has got a real Marc Bolan look going on and there are impressive cheekbones everywhere you look on stage) but even during the psychedelic-tinged Prism they promised more than they delivered for me.”
I feel like just writing ‘Ditto’. They still look great, they still bore me to tears.
They spew out lazy psychedelia by numbers almost without trying and you keep expecting some shimmering maiden dressed all in white to float across the stage humming Incense and Peppermint by The Strawberry Alarm Clock.
It’s a set where I want to shout “Make it stop” well before we are put out of our misery by a – rather frustratingly – storming closing track which just reinforces what a missed opportunity The Temples really are right now. Turn over the tables, drive out the imposters but please mind that lovely hair. 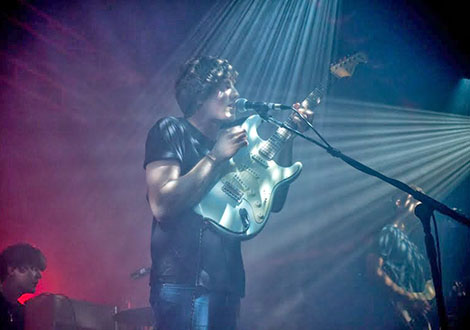 Circa Waves at The O2 Academy
And so to Interpol, a strange if welcome choice of headliner for a tour traditionally aimed at up and coming bands.
The New Yorkers have been there and sold the T-shirts, enough anyway to have a flag-waving Interpol posse front left among the crowd tonight. They actually played this self-same NME tour after the release of their classic debut Turn On the Bright Lights in 2002.
So what are they doing here, 12 years on, and with a fifth album on the way?
Well first of all they’re reminding us of just how great they can be, blasting into old favourites Say Hello To The Angels and the brilliant Evil, dark anthems of edgy post-punk, all urgency and threat.
The axis of frontman Paul Banks and lead guitarist Daniel Kessler is still there of course but the band is now without original bassist Carlos Denglerc and trying to overcome a lukewarm reception to their self-titled previous album..
Whether that is behind what I detect to be a bit of a change in sound I’m not sure but as the set progresses it does become more noticeable.
They can never be anything less than good of course – their back catalogue is too impressive for that – but those glacial, crystalline hooks that used to emerge from the shadows seem a little more rounded, a little more earthy, a little less special these days?
Kessler can still spit out some great lines and usually trots to the front of the stage as he does it, sharing the moment with the crowd, but too often I find a great start to a tune doesn’t really build and mid-track I’m slightly wandering off mentally when I should be in the moment.
Even Narc couldn’t be fully depended on to grab me throughout. There’s a couple of new tracks, the highlight being All the Rage Back Home, which has a great name and a mini-epic quality, but we’re still left wandering at where this top band are headed.
A lot of people have a lot of love for Interpol and most of us leave pretty happy tonight. But the band have emerged from the darkness blinking into the light and we’re not quite sure they’ve completely adjusted to the path ahead just yet.
Here’s hoping they find it.